China to issue a massive batch of product export quotas. What are the odds?
Share

Market discussions that China could be issuing up to 15mt of additional clean product export quotas for the remainder of this year have sent global diesel cracks plunging last week, falling by more than 50% since its peak in August. No official announcement has been made at the time of writing this insight, and the intent and practicality of a massive release of new product export quotas for the remainder of the year has confounded the industry.

After implementing a series of regulations aimed at rationalising the refining industry last year, China’s clean product exports fell sharply and averaged 480kbd or 1.8mt per month in the first eight months of this year. Out of the 22.5mt of clean product export quotas issued to state-owned refiners this year, only 65% of the quotas have been utilized, based on Vortexa’s calculations. Whilst domestic demand and in turn margins suffered from the repercussions of repeated Covid lockdowns across various provinces and generally poor economic activity in the country, strong export margins in the previous quarters at the peak of a global gasoline and diesel tightness did not incentivise Chinese refiners to raise product exports. Why now then? The industry’s best guess would be to boost the economy, as the government’s fiscal stimulus in the past months has shown limited results so far. 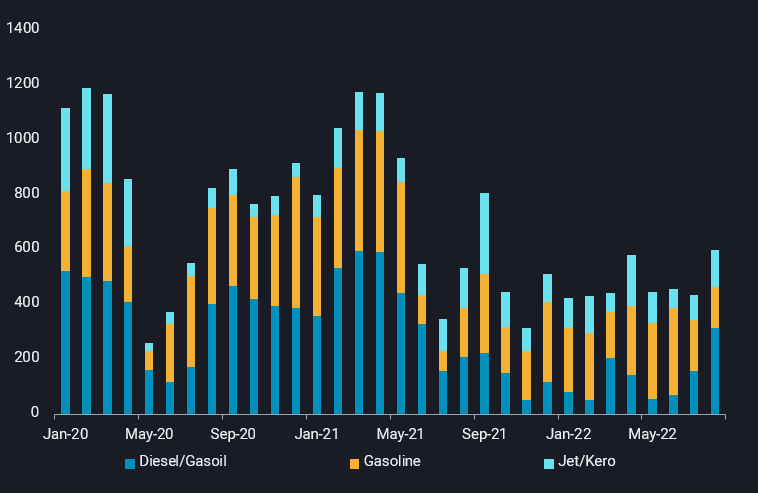 Refiners running out of time to import more crude

From a timing perspective, it would be challenging for Chinese refiners to ramp up their crude imports to reach the giant leap in product exports, considering a two-month minimum lead time between deal and delivery. To attain 15mt of product exports cumulatively for the remaining three months of this year, notwithstanding unused quotas from the earlier batches, Chinese refiners would have to ramp up their refining runs by 1.2mbd starting in October. However, crude loadings to China in August and 1H September have not shown strong signs of increase, averaging 7.4mbd in these months. That leaves refiners with drawing on their crude stockpiles as the only option if they were to make full use of the product export allocations.

China’s onshore crude inventories are currently hovering at around 900mb (or 58% capacity utilisation), with the lowest levels seen at 860mb in the last three years. With energy security being one of the key priorities for China in light of the current market uncertainties, it appears unlikely that the government would allow refiners to draw stocks way below historical levels for a prolonged period. But they could nevertheless help to bridge the time gap between crude imports and product exports in the interim. 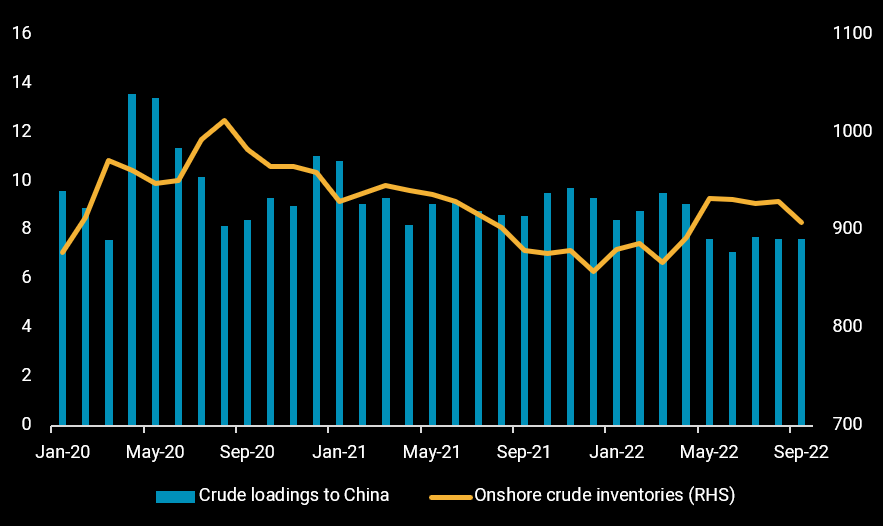 What are the alternative scenarios?

An alternative scenario is that China issues a smaller batch of product export quotas for the remainder of the year, to provide state-owned refiners room to raise exports in the event that domestic demand fails to recover. Or the government could issue a bigger batch of quotas and extend the expiry date through to next year, giving refiners more flexibility to adjust their export volumes.

What does this development mean for Russia?

Some commentators have focused on the potential upside for Russian crude exports to China. But there are many sources of crude currently at relatively low prices. Also so far, Chinese state-owned refiners have refrained from taking Urals all the way from Baltic or Black Sea ports, while the import capacity of the independent refining system is limited. At the recent summit in Samarkand, it has also become clear that China is not particularly happy about the developments around the Russian invasion in Ukraine. Accordingly, the more relevant aspect of this development could be that Chinese refiners may significantly cap the upside to global diesel cracks as well as the ability of Russia to re-allocate its diesel exports from Europe to other markets. Evidently, this has the potential to harm Russia’s oil income substantially.

Regardless of the outcome, global diesel fundamentals remain strong, despite a cool down from the seasonal peak in Q2. Demand will be primarily led by Europe, which has seen diesel loadings to the region rising steadily to a four-month high of 1.9 mbd in 1H September. Whilst diesel inventories in key storage hubs across Fujairah, Singapore and the US have risen in the recent months, they remain well below the five-year average levels. Besides China’s diesel exports outlook, the other big wildcard that could swing the market would be how cold Europe’s winter will be this year.

Keen to discuss the latest market trends further? We invite you to join us for an analyst fireside chat during 26-27 September. Register for a timeslot here.