LPG’s much anticipated demand recovery has arrived but soaring tanker rates and weak petrochemical demand are capping the pace of recovery.

After more than six months of lacklustre performance, Asia’s LPG cracks (against ICE Brent) flipped into the positive last week, supported by firming seasonal demand and falling crude prices. But it may be too early for LPG producers to celebrate as soaring tanker freight rates and continued weakness in Asia’s petrochemical sector are keeping a lid on demand recovery.

A strong uptick in India’s LPG demand buoyed by its Q4 festive season has seen imports into the country soaring this month. Domestic LPG sales in September/ October have surpassed the same period in 2019 pre-Covid, up almost 7%, according to official statistics. Nearly 740kbd of LPG has been discharged in the first 20 days of the month and imports this month are projected to set a record high. Th reinstatement of LPG subsidies for the lower income population by the government is likely to further incentivise the switching from biomass to LPG, which should see continued growth in baseline import levels.

Imports into China, on the flip side, are projected to decline for the third consecutive month to 910kbd in November, testament of the weak PDH margin environment. The country’s PDH plants have reduced their operating rates to 77%, down from 89% in early November, and seven new PDH plants have delayed their commissioning to next year in response to the weak margins (Argus). 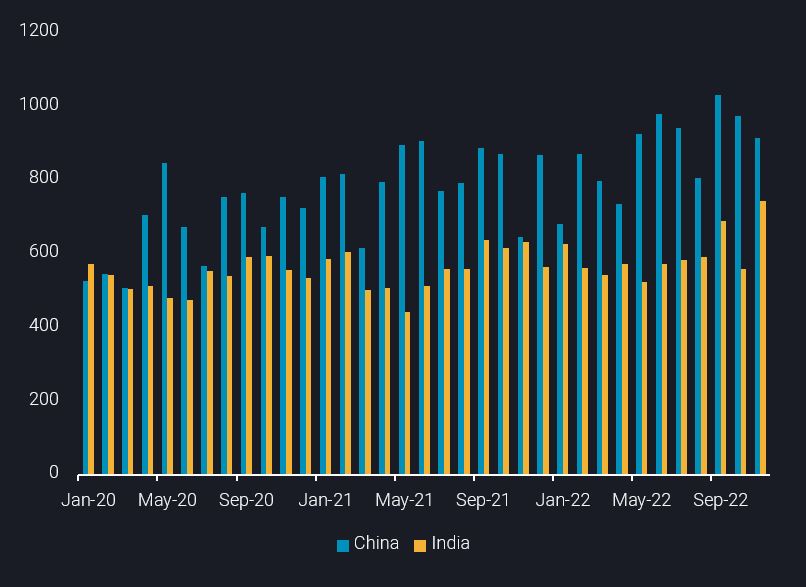 Meanwhile, rising US NGL production in the recent months has propelled the country’s LPG exports to nearly 2mbd so far this month, matching the last peak seen in June. US exports to Europe accounted for 120kbd (or 45%) of the increase, offsetting declining flows from Algeria. A mild winter in Europe so far and cooling natural gas prices since the peak in August have weighed on the region’s LPG demand, and coupled with strong imports in the recent months, have kept the region well-supplied. For this reason, ARA propane cracks have underperformed compared to the same period last year, although they have been climbing over the past weeks.

During the off-peak season, the USGC to East Asia voyage for a VLGC takes around 30 days, including a 2-days waiting time at the Panama Canal. With the current waiting time of 22 days, the voyage time along the same route has risen to 50 days. A further rise in waiting time may drive shipowners to consider taking the alternative route through the Suez Canal, which would take 47 days to reach the same destination, if it proofs to be more economical.

What lies ahead for the LPG market?

Global LPG demand is likely to remain supported by seasonal strength through to February next year, beyond which the outlook would depend on petrochemical feedstocks demand, particularly in East Asia. Key producing regions like the US and Middle East are projected to enter the new year with relatively high inventories compared to the previous years (due to lacklustre demand in the first three quarters of the year). Ample supplies, coupled with the global economic slowdown, are likely to put a lid on any LPG price recovery next year. On the freight market, early indicators are showing that VLGC freight rates may be peaking, although it remains to be seen how soon the Panama Canal congestion will ease.