Russia exported record-high volumes of crude to India in 1H January, facilitated by tonnage supply from existing and incumbent shipowners.

Since the EU ban took effect last December, the reshuffle of Russian crude has been much smoother than many market participants had anticipated. Russian Urals trading at prices below the price cap has been a key enabler, with existing and incumbent shipowners offering sufficient tonnage to ship Russian crude to Asia despite the longer distances compared to before.

Russia has done well in enticing Indian refiners to increase purchases of its crude as the EU pivots away. Arrivals of Russian crude into India rose by 260kbd m-o-m in December to reach 1.2mbd, a record high, while January arrivals are on-track to set another record with nearly 1.3mbd of Russian crude discharged in the first two weeks of this month. In contrast, around 770kbd of seaborne Russian crude was discharged in China in December, down nearly 27% m-o-m, with a slight rebound to 890kbd seen in 1H January. Market participants have cited possible delays in loadings of ESPO Blend from Russia’s Kozmino port in December due to heavy storms and limited vessel availability affecting deliveries to China that month.

Data on the discharge volume by destination ports in India reveals that private refiners have led the increase in Russian crude purchases. Their share of India’s crude imports from Russia increased from 40% during July-November last year, to 48% in December, rising further to 60% in 1H January. Crude imports excluding Russia by the private refiners have also risen by over 25% from November to 1H January, with only a marginal increase in their crude inventories, implying rising private refinery runs.

As the 5 February EU ban on Russian oil imports approaches, India’s diesel exports to Europe have rebounded to 260kbd in the first two weeks of January, reversing the trend of slowing exports over the last three months. The export-oriented private refiners will further edify themselves as key diesel suppliers to the EU after the ban on Russian oil products kicks in, giving them more incentives to slurp up Russian crude, as long as it remains attractively priced.

India’s higher imports of Russian crude have come at the expense of lower purchases from Middle East producers, particularly Saudi Arabia, Iraq and the UAE, which have collectively lost 20% of India’s crude imports market share – comparing December 2022 levels to 1Q 2022. The most striking example of this is Iraq losing its position as India’s largest crude supplier to Russia last September. 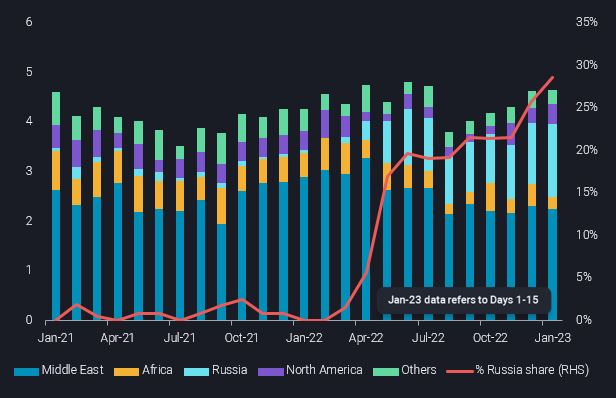 While several major shipowners like Trafigura and Total that were previously very active in the Russian crude trade have exited, there appears to be no shortage of Aframax and Suezmax tonnage supply from the remaining and incumbent shipowners based in Dubai, India and Greece so far. Close to 60% of the tankers that loaded Russian crude to India after 5 December are 15 years or older, of which, 2 tankers had previously carried Iranian crude. 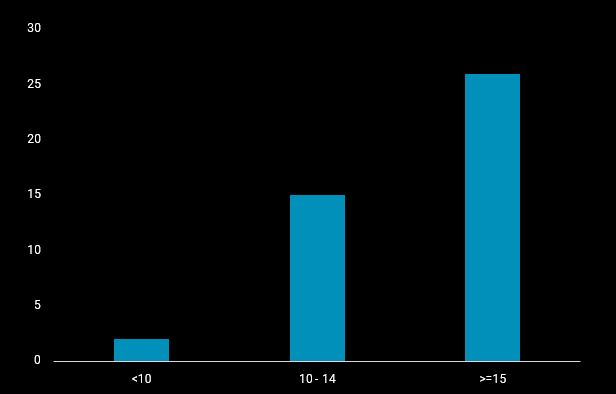 The implementation of the 5 February EU ban will see another round of dislocation of Russian oil products, but the additional dirty tanker tonnage required arising from the reshuffle of Russian fuel oil to Asia and the Middle East is expected to be minimal. The diversion of Russian fuel oil away from the EU started last May, and as of December, only 350kt (or 10%) of exports are headed to the EU. A bigger wildcard would be how successful Russia will be in diverting its diesel exports – its largest product export by volume – after February.