On 14 September, together with our partners from Rystad Energy and Argus Media, we showed over 150 slides to our highly engaged audience (thank you!) in London Shoreditch. Four panels on the different market segments were followed by intense Q&A sessions -we summarise the top talking points in this blog.

On the crude oil supply side, there was wide agreement that the market is now much looser than it was in H1 2022, and forward views suggested that 2023 may be on the long side. But we discussed the various risks to supply, stemming e.g. from sanctions on Russia, other geopolitical risks, natural decline, and limitations on investments including the US. Limited hope was seen for a comeback of Iranian or Venezuelan supplies.

As for demand, a divergence in fortunes between diesel and the rest of the refined product group was highlighted. Overall oil demand continues to disappoint, led by naphtha, but increasingly also gasoline and jet/kero. As for diesel, Vortexa data sees some strong pockets of surging imports that may be related to actual consumption, i.e. South America or Australia. But we do suppose that a lot of the massive spike seen in diesel arrivals outside Europe over Q3 (see left-hand chart) is forward-looking procurement (some form of stockbuilding, but outside the standard trading hubs or monitored storage tanks) ensuring amply supply ahead of a winter that might see new record highs in diesel cracks. 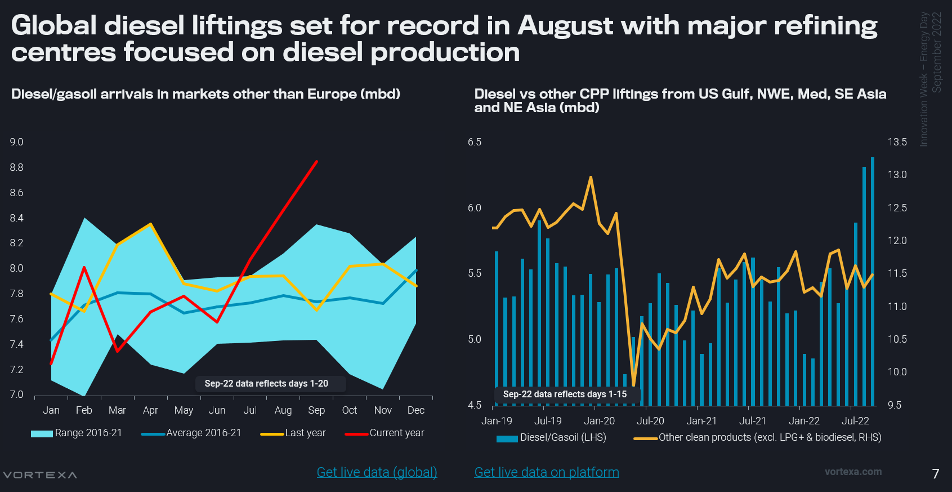 But this also alludes to risks for diesel cracks. If a fair chunk of current imports is buying beyond actual current needs, import demand may well fall in many markets over the coming months. Additionally we observed a huge yield shift to diesel, as illustrated by product exports from key refining hubs (right-hand chart). Diesel liftings from the US Gulf, Europe, and NE/SE Asia over July and August stood at 6.4mbd, up by close to 1.5mbd or 30% from a low point in Jan/Feb this year. All other product liftings were essentially unchanged.

The flexibility of the global refining fleet to react to new pricing incentives should never be underestimated, and over time this is set to dampen diesel valuations, in combination with demand destruction. But for now there is the refinery maintenance season coming up, and, psychologically even more important, the European ban on Russian crude and product imports. The latter, its relation to the G7 push for a price cap, and the repercussion of the European insurance ban on third-party shipments, were the most hotly and extensively discussed topics amongst the crowd at our event.

Our line of argumentation is the following. We deem the EU insurance ban a massive blocker for Russian oil exports to new markets, especially for clean products and in particular diesel. So far Russia has been largely unsuccessful in penetrating new markets, with just three countries, China, India, and Turkey (apart from a couple of new Middle Eastern traders), taking the huge majority of additional Russian supplies. It is a big enough challenge to just sustain these flows without EU insurance services, but there is still about 1mbd of crude, 600kbd of diesel and about 400kbd of other products that need to be rerouted to other players.

The trickiest barrels to reroute are likely to be the approximately 600kbd of diesel Europe still imports from Russia, which are likely to be replaced at the last minute. Based on observations in spring and summer we think European buyers will simply outprice other importers and attract the required volumes from the wider Arabian Sea region and the US Gulf Coast. Russia however is set to struggle to find buyers for 600kbd of diesel on short notice, while even existing flows could come under pressure from the insurance ban.

Accordingly, we think that an oil price cap has become a necessity to ensure the continued flow of Russian oil. By exempting the respective flows from the insurance ban in exchange for the market’s acceptance of the price cap, Russian supplies are facilitated in a subsidised manner to Southern Hemisphere/East of Suez markets, while G7/EU countries can continue to refrain from taking Russian oil. Russia may even see this as ultimately supportive in its endeavour to establish a new diversified client basis, outside the historically dominant European market. 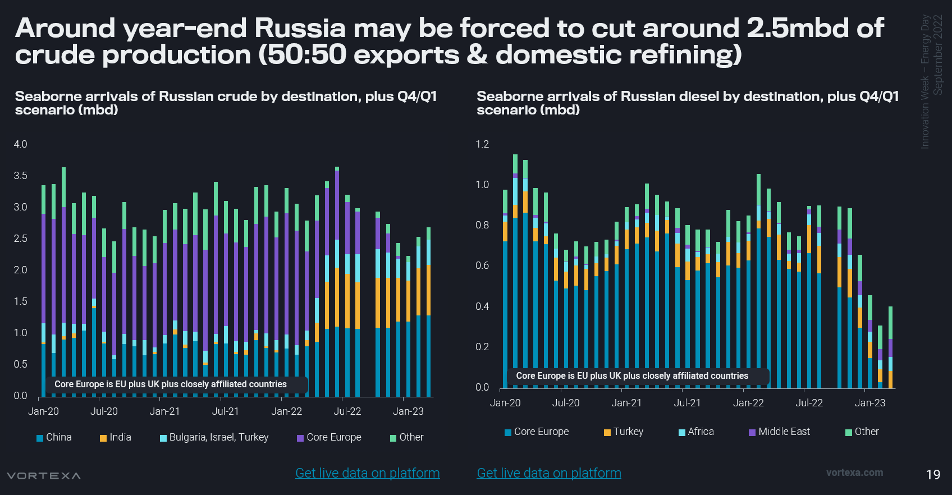 Russian crude and diesel exports by destination and Q4/Q1 scenarios

But even with a timely introduction of the price cap, we see a strong likelihood of temporary Russian struggles to place all the crude and products around year end. Lower crude exports and lower product exports (via refinery run cuts) would both require crude production shut-ins as the Russian storage system as well as access to ships is limited. Around Dec/Jan we could therefore see a loss in Russian crude production of up to 2.5mbd. However, as new trading routes and logistics come into play most of the affected production could be reinstated over the course of H1 2023, keeping the annual production downside at a much lower level. Without question, there are many unknowns, including the further military developments in Ukraine and the Kremlin’s reaction.