In this insight we shed light on the diverging trends emerging for crude and refined products loadings from OPEC+.

As the impact of various sanctions on Russian oil ripple through the global market, we see diverging trends for crude and refined products loadings from OPEC+. As a collective, OPEC+ loadings of refined products exports increased m-o-m April, while crude loadings fell.

Total crude/condensate loadings by OPEC+ stood at 28.6mbd in April, down by 240kbd m-o-m, despite a sharp rise in Russian crude loadings (+600kbd m-o-m). Buying interest from many (mostly Europeans) for Russian crude has waned in recent weeks but India and China have stepped up purchasing of Baltic and Black Sea Russian crude.

In contrast to Russia, most other large producers in OPEC+ have barely, if at all, upped crude loadings in April. Amongst the largest producers, Saudi Arabia, Kuwait and Libya posted lower m-o-m crude loadings in April, the latter impacted by production shut-ins and blockades at terminals. And West African suppliers Nigeria and Angola also saw declines, underlining a longer, more structural decline in production. Aside from Russia, the only significant exception among the OPEC+ group to have increased crude loadings was the UAE, posting a m-o-m increase of 480kbd. 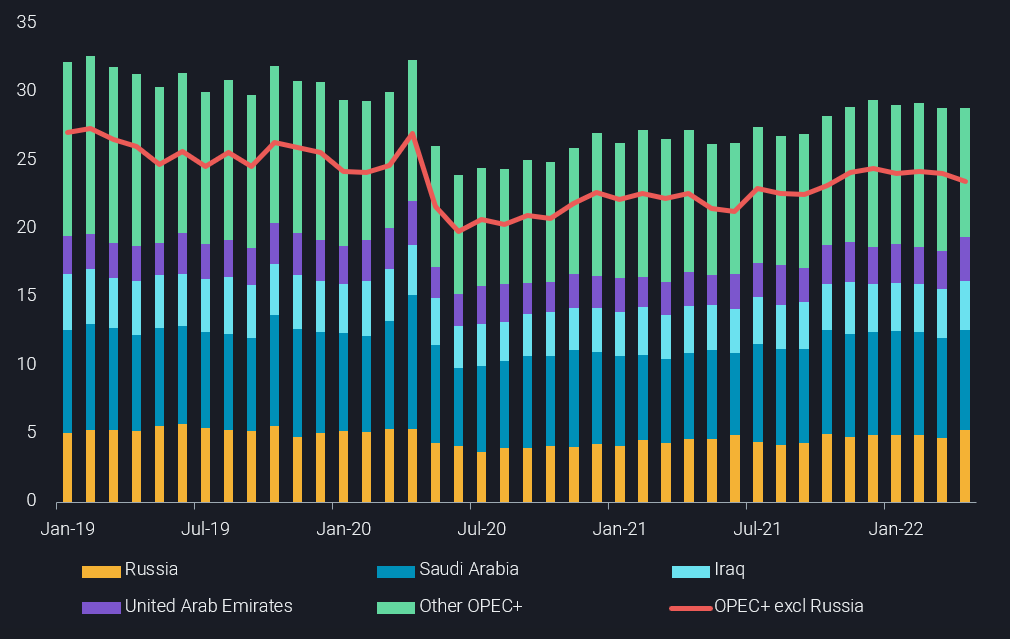 In contrast to the OPEC+ decline in crude loadings, refined products loadings have grown m-o-m in April, no doubt supported by surging product cracks around the world, especially for middle distillates.

Total refined product loadings in April (combined clean and dirty products – naphtha, gasoline, jet, diesel, dirty feedstocks and fuel oils) from OPEC+ reached 8.7mbd in April, up 200kbd from March. Though that figure is not as large as the 240kbd m-o-m drop in OPEC+ crude loadings, it masks somewhat by a huge reduction in Russia products loadings. Total Russian products loadings fell below 2.4mbd in April, the lowest since August 2020, amid run cuts at domestic refineries.

By excluding Russia from OPEC+ products loadings, April’s total of 6.3mbd is actually a five-month high. And while no single producer has massively upped product loadings, m-o-m increases in the range of 60-90kbd have been posted by UAE, Kuwait and Algeria. Saudi Arabia, the largest source of refined products in OPEC+, only marginally increased loadings (+30kbd) in April but that figure could climb in May as refineries return from maintenance.

Looking ahead, it is well possible that this divergence between OPEC+ crude and products loadings prevails. Refined product margins are strong across the globe and will continue to be bolstered by seasonally rising demand for fuels, while Europe’s potential ban on Russian oil draws closer. Meanwhile, the flatness in OPEC+ seaborne crude loadings is likely to continue at best, as it becomes increasingly evident that structural production decline issues, regular operational challenges and a lack of investment easily counterbalance what may still be left as spare production capacity, possibly to be made available in line with rising output quotas. And the very most people think that Russian production is set to decline further, albeit recent trends in exports and floating-roof inventories suggest otherwise. 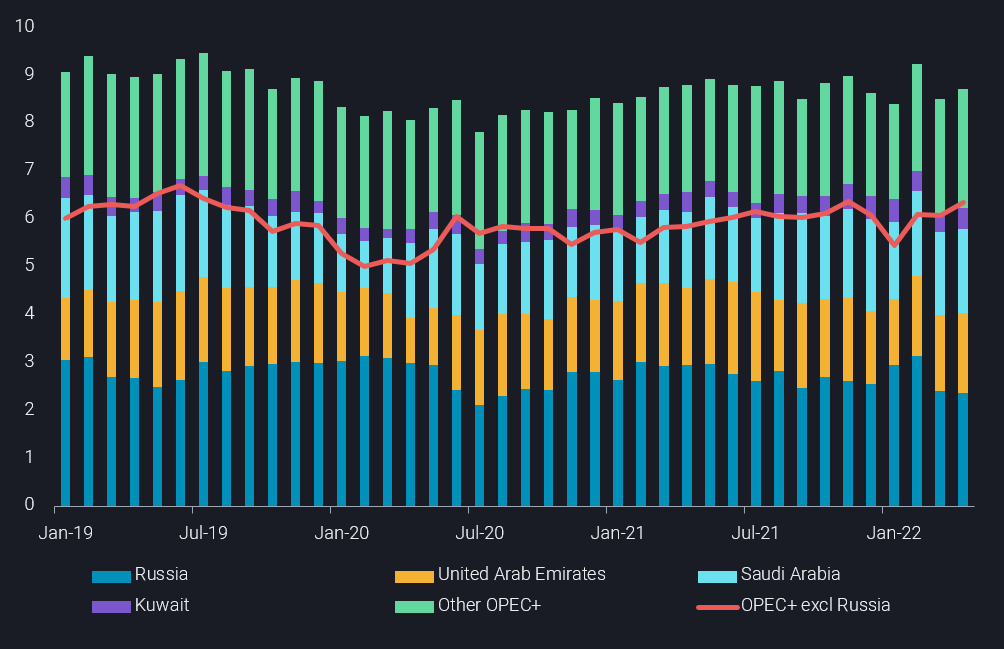