Vortexa analysts take a look at the impact on price curves for fuel oil and gasoil.

With less than ten months to go until the International Maritime Organisation (IMO)’s 2020 bunker specification comes into force, Vortexa analysts take a look at the impact on price curves for fuel oil and gasoil.

To recap, from the start of 2020, the maximum permitted sulphur content for marine bunkers will be reduced from 3.5% to 0.5%. This will mean a huge drop in demand for high sulphur fuel oil (HSFO) – potentially 3.4m b/d (around 16m mt per month) – and bunkers demand shifting to blended 0.5% fuel and middle distillates-based marine fuels.

Demand for HSFO will then be limited to pockets of utility demand, mainly in the Middle East, and marine demand for vessels that can use HSFO because they are equipped with exhaust gas cleaning systems, also known as scrubbers.

This very steep backwardation of an average of $8/mt per month incentivises traders with tanks not to store HSFO, as it has a declining value over time. Traders with HSFO in tank are faced with the problem of covering this monthly decline in value plus their monthly storage cost in order to breakeven. At the front of the market, the February 2019 contract was seen at $3.25/mt over March, but the backwardation increases as we approach 2020 with the strongest intermonth spread being September-October at $12.75/mt.

Backwardation is usually associated with the front of the market being strong because of a lack of physical supply. In this case, the extreme backwardation took hold in 2016 after the IMO’s decision to lower the cap on sulphur in bunkers was made, which saw a collapse in future values for fuel oil.

In a self-fulfilling twist, this backwardation has given legitimate strength to the front of the market because of the painful storage economics: with traders avoiding storing HSFO, there has been a shortage of prompt availability in key pricing hubs, which has seen premiums rise.

In contrast, Low Sulphur Gasoil futures are in contango; where nearby contracts are trading below contracts that expire further into the future. The February 2019 contract was at an $8.50/mt discount to the February 2020 contract.

The gasoil curve is opposite in structure to fuel oil and not with the extreme steepness of fuel oil. This perhaps indicates a bleak future for fuel oil where demand will be minimal.

In contrast, the mild contango in the gasoil curve suggests there will be increased demand in the future, but that supply can adequately cover it. If there was widespread belief among traders of gasoil scarcity in the future, the contango for gasoil prices would be much more extreme.

The absolute difference between the price of HSFO and gasoil is what ship owners will look at when considering whether to install scrubbers or not. The differential for HSFO and gasoil across 2020 contracts was recently averaging $309/mt. The cheaper HSFO is, relative to gasoil or other 0.5% (max) sulphur compliant fuels, the more quickly the owner will get payback on their scrubber. Carrying out a scrubber retrofit for an Aframax or LR2 tanker costs around $2.3m plus the opportunity cost of sitting in drydock for around three weeks.

Owners must decide between this or burning the more expensive compliant fuel – but time is running out for scrubber ordering and installation prior to January.

Across the market, 0.5% sulphur fuel oil futures contracts will be going live for Rotterdam Barges, Singapore and US Gulf Coast cargoes and the respective quality differentials over the long established regional high sulphur curves. 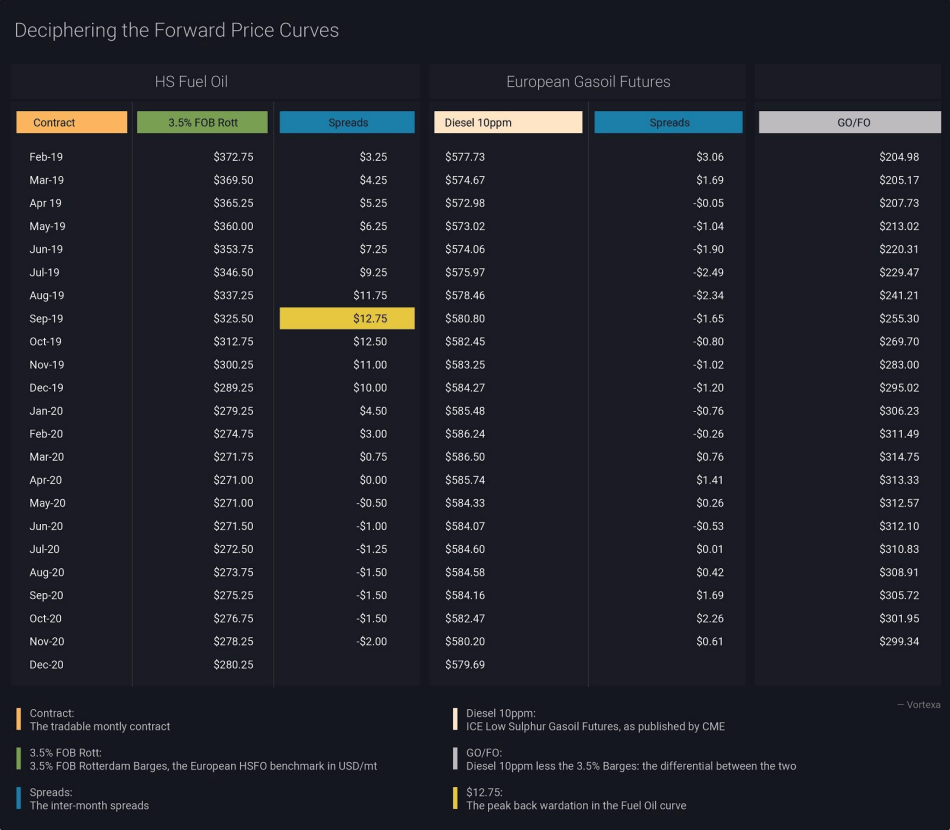