Part two of a three-part series looking into ship surveillance and tracking with satellite imaging.

Ship surveillance & tracking – part 2: towards fully convolutional network, for more interpretability (example of CAM attention), early localisation properties, and capability to evolve into an image segmentation model. In the process, we’ll delve into the technique of transfer learning.

Motivation: although the simple ConvNet we built in Part 1 did pretty well at the classification task we gave it, the usage of dense layers makes it hard to interpret, both by human, and for further models to be built on top of it. In this post, we explore a different ConvNet structure that uses convolutional layers and pooling layers instead of dense layers, keeping connections localised. It is not only more interpretable when used for classification, but can also evolve into an object localisation / segmentation model, which we will present in part 3, with a U-Net.

While we’d like to start with the beauty, we often need to face the beast first:

Visualisation of the model’s attention, and with it emerging localisation properties. More details at the end of this post.

This is the 2nd part of a 3 blog posts series:

What you will learn in this post (Ship detection – Part 2):

Transfer learning is the idea that strong neural networks trained for one application have generalisable features that can be leveraged for other applications. This means a large network fine-tuned for weeks on problems such as ImageNet, with 1000 classes and 1.2 million images, would have learned something fundamental about processing features, e.g. detecting edges, managing contrasts, etc.

Training those networks is expensive though: for example with ResNet50V2 the iteration time on my machine (CPU only) was 12h per pseudo-epoch vs 35min for the simple ConvNet presented in Part 1 (side note: with GPU you get a 15x increase in speed so that changes the game).

To choose what network to transfer from, I took a look at the performance on the ImageNet competition. A word on popular networks you may want to use for transfer learning:

First go at transfer learning on TensorFlow 2.0 with MobileNetV2

Given my computer’s performance limitations, I had a go at MobileNetV2, and got a pseudo-epoch iteration time of 2.5h (CPU).

Using the pretrained model as a feature extractor, a classifier can be built by adding 2 layers:

The model quickly converged to 77.5% accuracy, which may sound ok, but actually corresponds to the class imbalance. Looking more closely, the model only learned to always predict “no ship”, and the loss stayed flat for 5 pseudo-epochs (i.e. over 200k images). I explored a range of learning rates, but this didn’t change much: 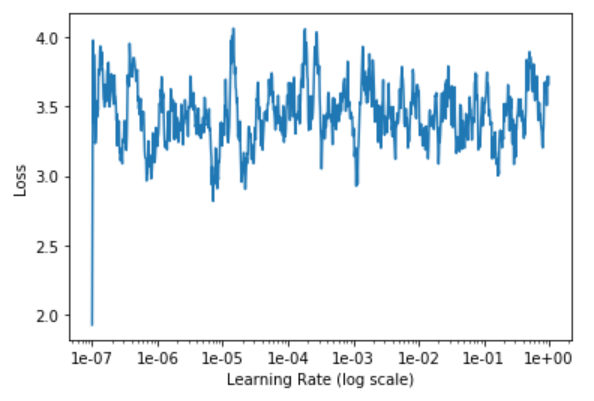 Although the model may not have enough capacity, and acknowledging the ImageNet dataset is pretty different from our satellite images of ship, I felt such a bad performance was suspicious.

I tried feeding the network repeatedly the same single batch of 40 images to see if the model is able to fully overfit, but it didn’t seem to? The model clearly has enough capacity to learn by heart 40 results.

Turns out there was an error in the TF documentation, as raised in this Github issue: binary_crossentropy expects by default a probability, not a logit (raw value, without activation). Fix in flight

Lessons learned: trying to overfit a single batch to check the feedback mechanism works can be a pretty handy sanity check tool

Second go at transfer learning on TensorFlow 2.0 with MobileNetV2

With transfer learning we observe quickly very high performance while only training 1k parameters. However, strangely the model starts to overfit despite so few parameters.

I tried adding dropouts, and even 50% didn’t curb the model’s overfit. I tried GAP instead of GMP to spatially regularise, and performance went down closer to 80% than 90%. The ImageNet images are pretty different from ours, so I decided to fine tune the last layers of the network with a small learning rate (3E-5), and got a boost in performance initially, and very quickly more overfitting. I didn’t try increasing the training set size as the model starts overfitting before having seen the entire data set!

At this point I thought the model may be stuck on a local optima, may benefit from larger images, fine tuning of deeper layers, or counter intuitively need more capacity / a new architecture. Let’s try some of those!

Transfer learning from Xception network, and learning rate cycling to get out of local optima

We first get a baseline with Xception of training the base classifier + fine tuning, without learning rate cycling:

You can observe that fine tuning initially gives a boost in CV accuracy, but leads to aggressive overfitting.

Neural networks have a reputation for being hard to interpret, and are often described as black boxes. With CNNs using global pooling layers, an activation map indicating the discriminative image regions used by the network can easily be calculated.

Just before the final output layer, we have performed global pooling on the convolutional feature maps, and then used those features in a fully-connected layer producing the desired classification. Given this simple connectivity structure, we can identify the importance of the image regions by projecting back the weights of the output layer on to the convolutional feature maps, a technique known as Class Activation Mapping (CAM).

Another way to understand this is to look at our simplified architecture:

The quantity we show on the heatmap is the Xception output, summed over the channels axis, with the sum weighted by the Classifier’s weights for each channel.

This simple quantity can be directly visualised. In practice though the resolution is quite low (10×10), as we are deep into the network , so in the visualisation above we have upsampled it (back to 299×299 to overlay with original image).

Core part of the calculation. The dotprod is what we show on the heatmap, after upsampling. More detailed example here.

I hope you enjoyed the ride and got some good takeaway. I’d love to hear of your own experience with transfer learning, and whether there are steps in the analysis you interpret differently! In the next post, we will reuse the Xception classifier we trained in this post to 94% accuracy, and will reuse it as the encoder of our U-Net for image segmentation / ship localisation.