Russia and Ukraine: What's at Stake for Oil?

Much has been written about Russia’s tremendous geopolitical leverage afforded by its role as a critical supplier of natural gas to Europe, especially now during peak heating demand season in the Northern Hemisphere. Less attention has been paid recently to Russia’s role as an oil supplier. But as global fears intensify over a possible Russian military invasion of Ukraine, it’s time to consider scenarios in which oil markets could be affected by an actual clash or even anticipation of one.

Russia is a key supplier of crude oil, refined products and natural gas - via pipelines and vessels. Most of these hydrocarbon exports discharge in Europe but significant volumes also head to Asia and North America 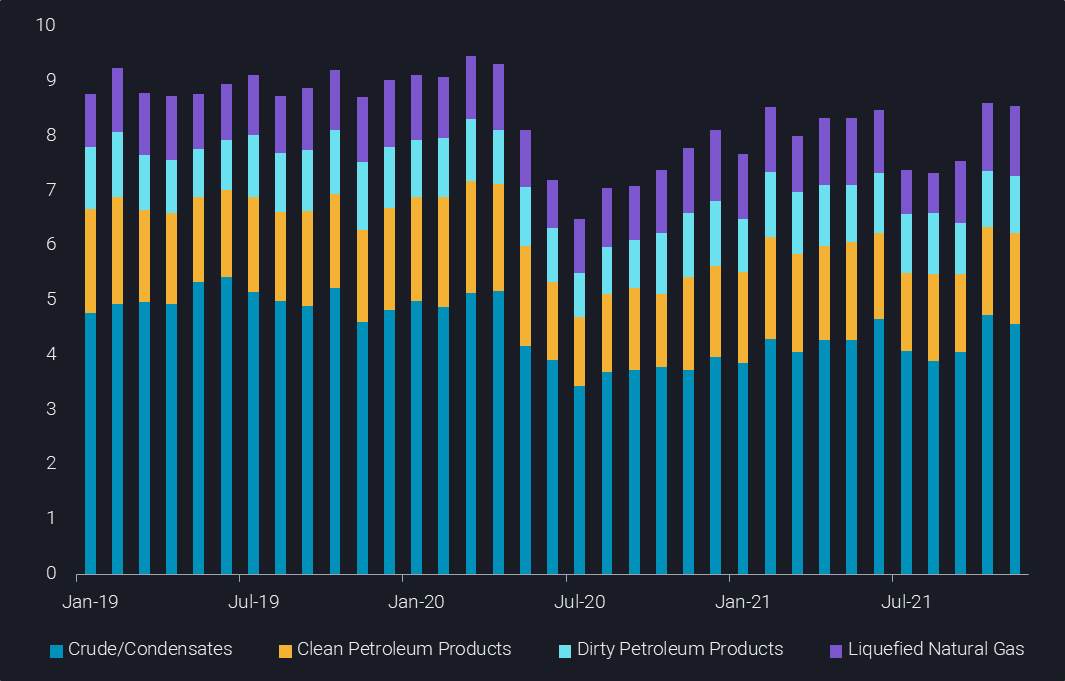 At time of publishing, we assess the likelihood of an invasion of Ukraine to be low. However unlikely, a military conflict could interrupt oil supplies for one or more reasons:

Europe is by far the region with the most vulnerability to an interruption in oil deliveries from Russia - its largest international supplier of crude oil, clean fuels and heavy fuel oil.

Our data shows Russia supplied Europe with around 2.7mbd of crude for the first 11 months of this year via seaborne tanker movements; around two thirds are Russian grades, the remainder is CPC Blend originating in Kazakhstan and sent from Russian ports. These seaborne flows are in addition to the 750kbd of crude oil that arrived from Russia via the Druzhba pipeline network, bringing the total volume into the continent to around 3.5mbd.

Russia is also Europe’s top outside supplier of refined products. European countries receive 1.1 mbd of clean fuels from Russia, including diesel and gasoline, double the volume of clean fuels they receive from number-two supplier the United States. As for dirty oil products like fuel oil, Russia is also Europe’s top foreign source, supplying 85 percent of its dirty product imports at 510 kbd.

Interestingly, Russia is also an important source of fuel oil imports to the United States. Our data shows 250kbd of Russian-origin fuel oil arrived at US ports in November, accounting for one third of total US fuel oil imports. Among the large US refinery systems taking Russian fuel oil cargoes in November were Valero, ExxonMobil, Chevron and Shell.  In reality, the reliance of US refiners on Russian fuel oil is likely to be understated in our flows, because some Russian-origin fuel oil is often transported to Rotterdam and non-Russian Baltic ports for blending and subsequent re-export.

Russia is a huge global player in the oil market and is most relevant for European buyers rather than any other region. If European imports of Russian oil experience delays or interruptions, the available alternative sources will come at a higher cost. For example, for diesel and crude oil, Europe could lean increasingly to US or Middle East exports to offset any potential Russian supply disruptions, although resulting price spikes for these commodities would cause demand to pull back.

In an extreme scenario about 5mbd of crude and product exports could be lost (assuming exports continue to Asia). About half of that could be counterbalanced from OPEC spare capacity in the Middle East (if politically agreed). Stockdraws can only be of transitory help in such a situation. Ultimately, 2-3 mbd of oil demand would have to be priced out of the market, equivalent to about 3-5% of seaborne crude and product supplies, a challenging but not impossible task.

When it comes to natural gas, Europe would lose about 55% of its gas supplies. If it were to source that volume on the global LNG market, all other recipients of LNG would be deprived of about 50% of their supplies. This indicates that the price reaction would be astronomical for LNG, even more so as winter demand is price inelastic, given life-sustaining winter heating and power generation requirements. Therefore any material disruption to imports of Russian gas would create a much more dramatic impact for European consumers even compared to a severe oil supply disruption.