In this insight we explore the latest trends with CPC Blend loadings and its impact upon crude supply in the wider Black and Capsian Sea region.

Black Sea and Caspian Sea crude supply is being increasingly hampered by falling loadings of Kazakh CPC Blend crude. Though other grades have increased volumes to some extent, the ongoing uncertainty over this flagship grade means wider regional supply volumes remain at risk, especially for European buyers. 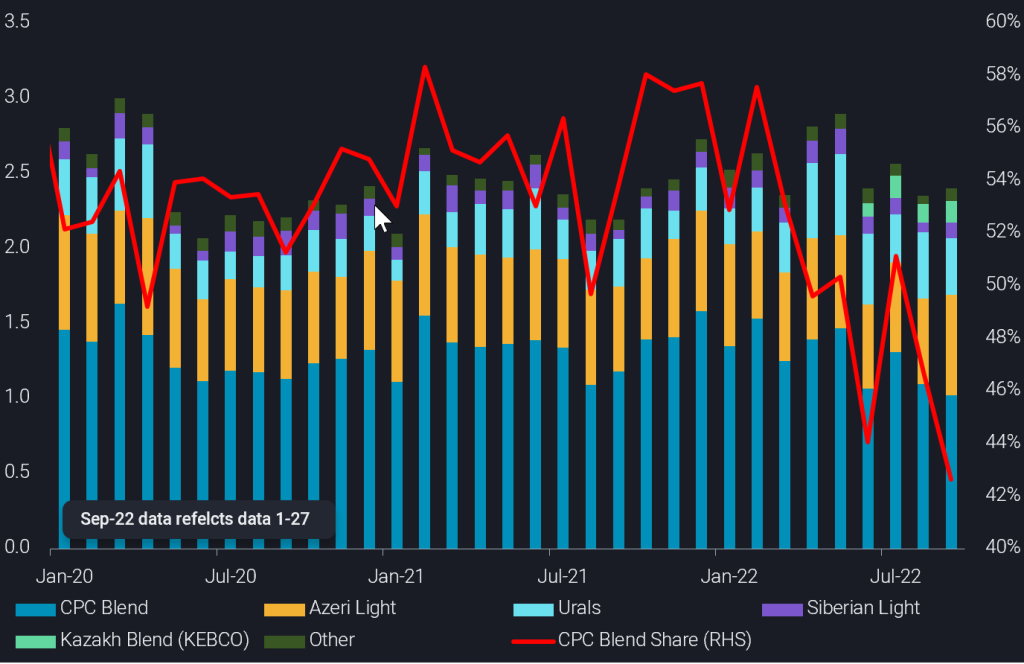 Total CPC Blend loadings so far this month (days 1-27) stand at just over 1mbd. Should this rate prevail through the end of the month, it would be the lowest monthly total since September 2016.

Loading activity at the CPC Marine Terminal in the Russian port of Novorossiysk has been disrupted on multiple occasions since the start of the Russia-Ukraine war. The grade, though Kazakh in origin, and therefore unaffected from western sanctions on Russian oil, is still highly exposed to geopolitical risk because it can only be exported in significant volumes via the Russian Black Sea.

The CPC Marine Terminal has been operating at around 50% capacity for most of September but part of the decline in loadings is also attributed to ongoing maintenance work at the Kashagan and Karachaganak oil fields. The combination of these factors means preliminary loading schedules for October show an expected 7% m-o-m drop in crude loadings (Argus Media).

As the largest single crude grade in its region, the lack of CPC Blend supplies has kept total Black/Caspian Sea loadings firmly below pre-war levels. Total Black/Caspian Sea loadings so far in September are largely flat m-o-m at 2.4mbd, well below the 2.9mbd peak seen in May. Supplies would have been even lower were it not for a slight uptick in the Azeri Light crude loadings (BTC Blend) – the second largest stream in the region.

Azeri light loadings from the Turkish port Ceyhan are up around 100kbd m-o-m so far in September at 670kbd, the highest since April. Other grades in the region show smaller m-o-m fluctuations in September – a slight drop in Russian Urals loadings is almost fully offset by more Siberian Light loadings. Black Sea loadings for recently re-branded Kazakh-origin “KEBCO” cargoes (previously sold as Urals) remain fairly stable m-o-m averaging around 140kbd.

Given that there are currently few signs suggesting a swift and large recovery in loadings of CPC Blend (and therefore total Black/Caspian Sea supply), we expect the current trend of European buyers diversifying their crude import slate to continue. For example, Italy, the European country that historically most reliant on Black/Caspian crude, has sharply reduced flows from the region, instead seeking more crude from elsewhere in the Mediterranean and also West Africa.

From a quality and regional perspective, the loss of CPC Blend volumes is currently relatively easy to digest, given that the evident surplus in global crude supply expresses itself in pressure on Atlantic Basin light sweet crude. But we should not forget how tight that very same market was just a couple of months ago. A rerun of tightening supply/demand patterns certainly cannot be excluded, especially under the backdrop of Russian supply losses and rising Chinese crude imports.