Iran exported 1mbd of crude/condensate in October 2022, a 300kbd increase m-o-m and 100kbd above the 12 month average. This marks October as Iran’s highest crude/condensate exports since January 2022, where exports surpassed 1.1mbd. Exports moved flat-to-lower since January, averaging 850kbd over February to September 2022, as Chinese buyers benefited from increased competition between Iranian and discounted Russian crude.

Meanwhile, Iran’s onshore crude inventories have broadly increased, sitting at 97.8mb in October, a 1mb stock build m-o-m driven by the refinery outages observed above. This is the first m-o-m stock build since May 2022, as Iranian crude stocks drew 8.5mb from May to September 2022 amidst flat crude production and an attempt to facilitate higher exports given heightened competition with Russia. 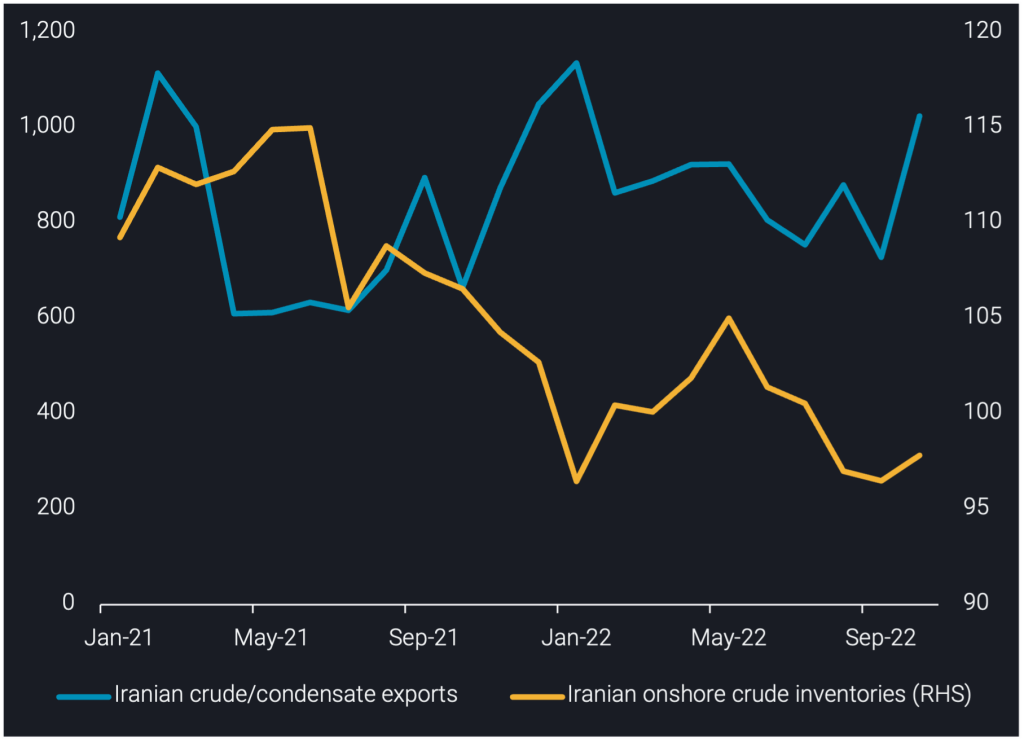 As of 1 November, South Pars Condensate in floating storage is assessed at 41mb, a 4mb increase m-o-m. There are two primary reasons behind this increase. Firstly, there is a decline in NITC tankers sailing for Venezuela. Venezuelan crude production was assessed at 12 month lows in September (OPEC), and has hence resulted in lower demand for Iranian condensate for blending purposes. Secondly, two non-NITC VLCCs newly joined the Iranian trade in October (port loadings), reducing the need to utilise NITC tankers. This has resulted in a larger number of NITC tankers on floating storage duty.

Iranian crude in floating storage is assessed at 16mb in October, a 7mb decline m-o-m. This decline is driven by China’s increased demand for Iranian crude. 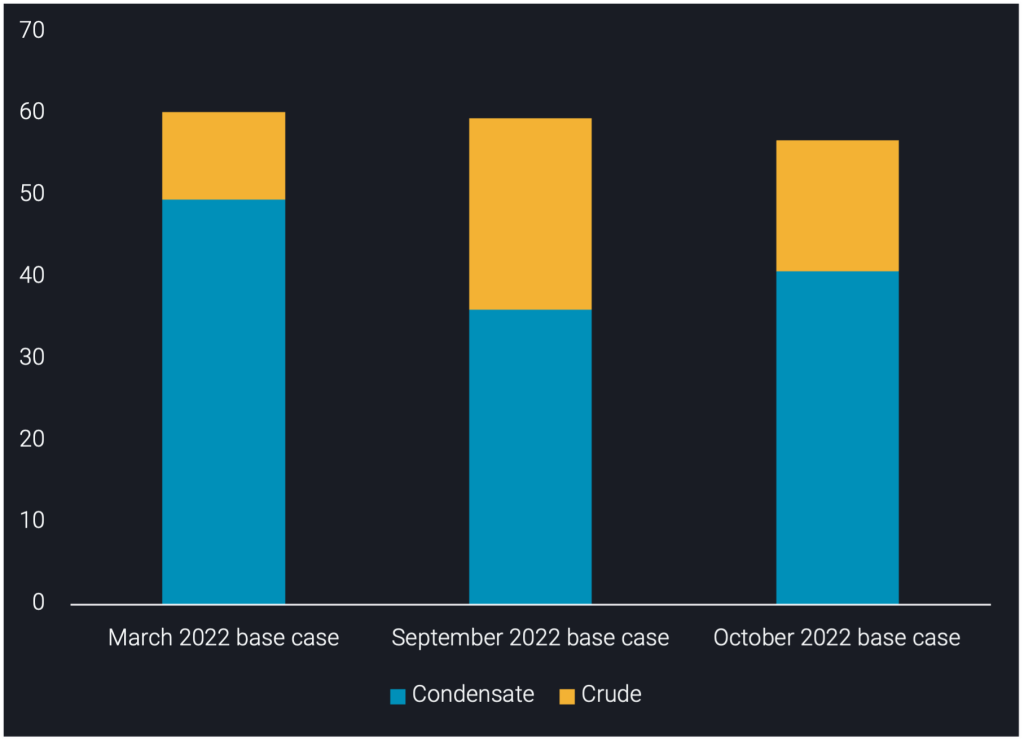 Russian oil exports on carriers previously involved in Iranian trade were 190kbd in October, only a marginal increase m-o-m, largely a result of the pause in STS activity of Russian Urals in the North Atlantic since August. As more companies scale back from carrying Russian crude/products, those familiar with the sanctioned crude trade will continue using their tankers to assist Russia in exporting oil East of Suez. 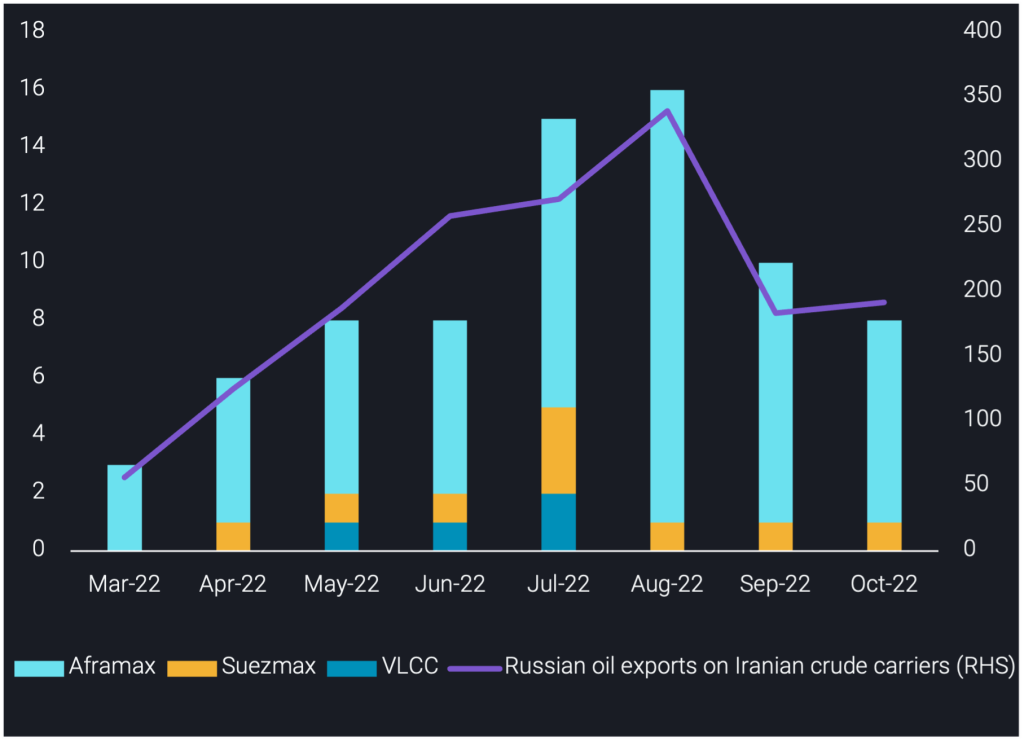 As of 1 November, we have grouped an additional 178 tankers based on their likelihood (%) of switching from Iranian trade to Russian trade into four groups:

> 75% (highly likely): 56 tankers with an average age of 20 years. This includes tankers 17 years and older, have China/India/Russia/UAE ownership interest, tankers belonging to the North Atlantic China network, no IR or EU flags and sanctioned under OFAC.

> 50% – 75% (likely): 47 tankers with an average age of 20 years. This includes tankers 17 years and older and ownership interest other than those listed above.

< 25% (highly unlikely): 51 tankers with an average age of 16 years. This is exclusive to the NITC fleet, which is highly unlikely to switch due to government ownership.

As the EU ban implementation fast approaches, any of these tankers could join the 40 tankers which have already made the switch, especially VLCCs which could perform STS operations via the Baltic. However, these STS operations during the winter will require the utilisation of ice-class vessels, though there is a shortage. 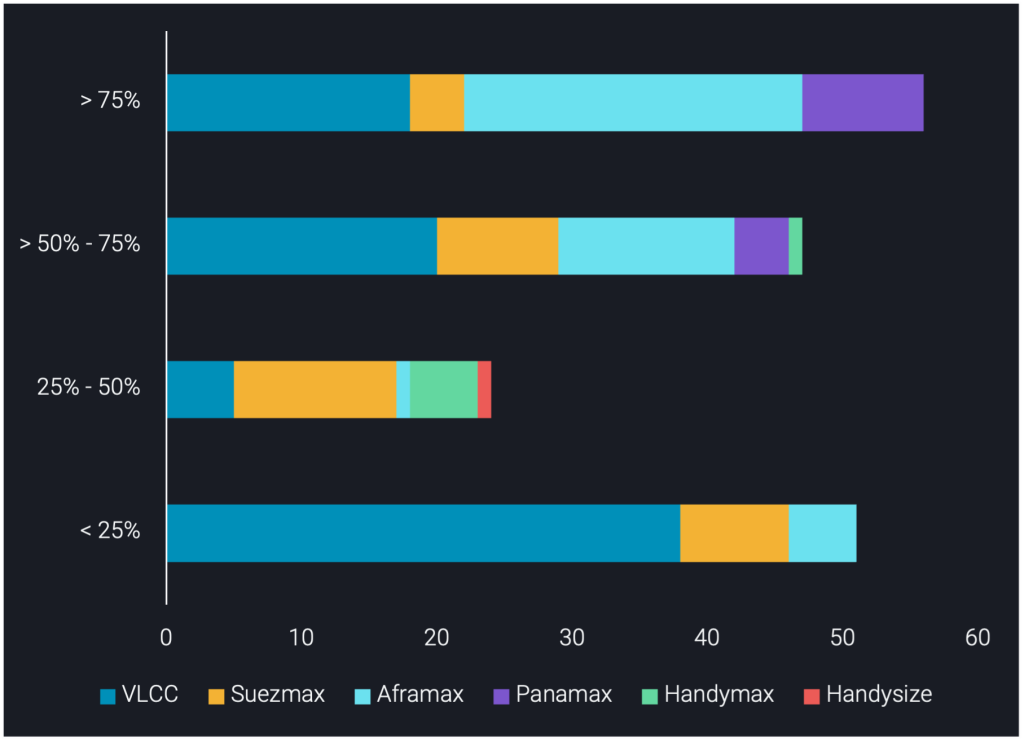