Higher core oil shipments in July have helped to cool pricing, but diesel is set for a bright future while for crude oil various supply risks loom.

WTI futures hit a fresh three month low of around $95/b on 22 July, a hefty $25/b lower than at the end of last month. Soaring inflation amid a global energy crisis turned recession fears from a downside scenario into a base-case assumption, at least amongst a wide set of market participants. In line with that, demand expectations were curtailed and oil prices came under pressure together with many other indices.

Leading investment banks (e.g. Goldman Sachs) and analysis houses emphasize that the oil market remains structurally tight with a lot of supply risks looming down the line (Russia, Kazakhstan, Libya amid others). And there is a good reason for this view. However, the latest seaborne oil flow data from Vortexa shows a massive pick-up in crude, gasoline and diesel exports from many places around the globe, including the United States. Various months of record refinery margins, political efforts led by the US, and probably also disappointing domestic demand levels are likely to be behind this development.

US shines as growing supplier of crude and diesel 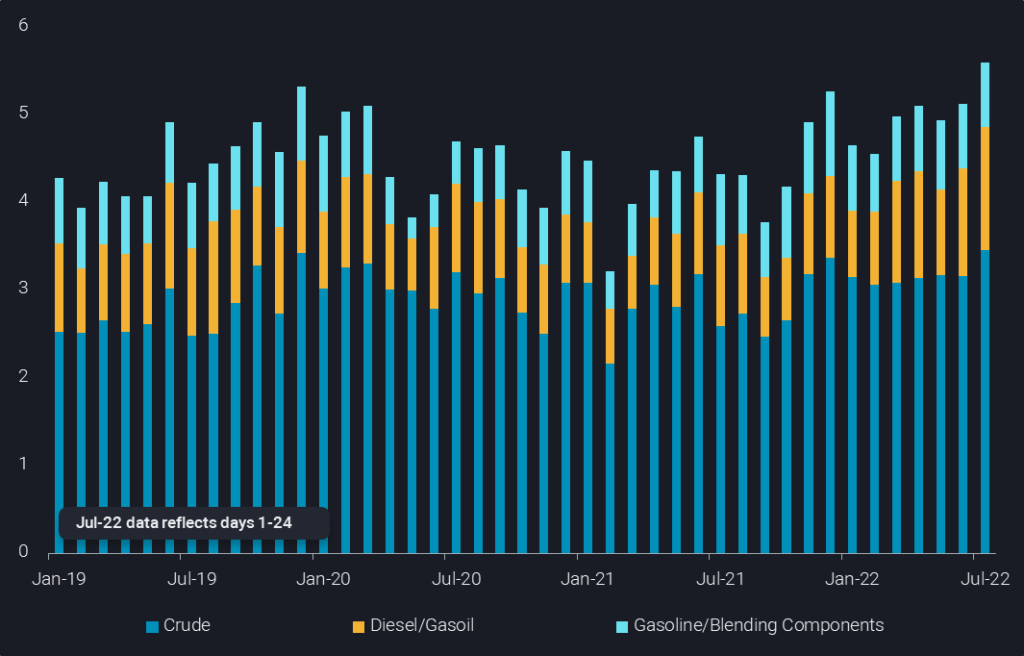 Starting with the United States, combined exports of crude oil, diesel and gasoline (incl. blending components) may reach a new all-time high in July, based on the trend of the first 24 days of the month. The preliminary reading is some 200kbd above the previous record of 5.3mbd set in December 2019. Diesel exports are a key driver, currently assessed at close to 1.4mbd. July is set to show the fourth seasonal record in a row in combined crude, diesel and gasoline exports, while any month-on-month increase would go against the seasonal trend and therefore be even more remarkable.

US motor fuel exports have been building steadily since a low point hit in February 2021, while crude exports are pretty stable at close to 3.2mbd ever since November last year. Clearly crude oil stock draws from the Strategic Petroleum Reserve (SPR), averaging 579kbd year-to-date as of July 15 and accelerating over recent months, have allowed US crude exports to stay higher over the summer months in spite of the peak in domestic refinery operations.

Political intervention by the Biden administration, apart from SPR releases and possibly pushing US refiners an extra inch to maximize fuel output, may have also helped to stimulate the recent surge in crude liftings out of Saudi Arabia and the United Arab Emirates. For 1-22 July, we currently have 1.7mbd higher exports than the pretty stable average of the previous nine months of 10.4mbd. However, there is good reason to be cautious. Saudi and UAE exports are often front-loaded within a month, and data corrections over time tend to bring volumes lower than original indications. Nevertheless, the two OPEC countries, likely the only ones with spare capacity, are surely increasing exports significantly at this point in time. 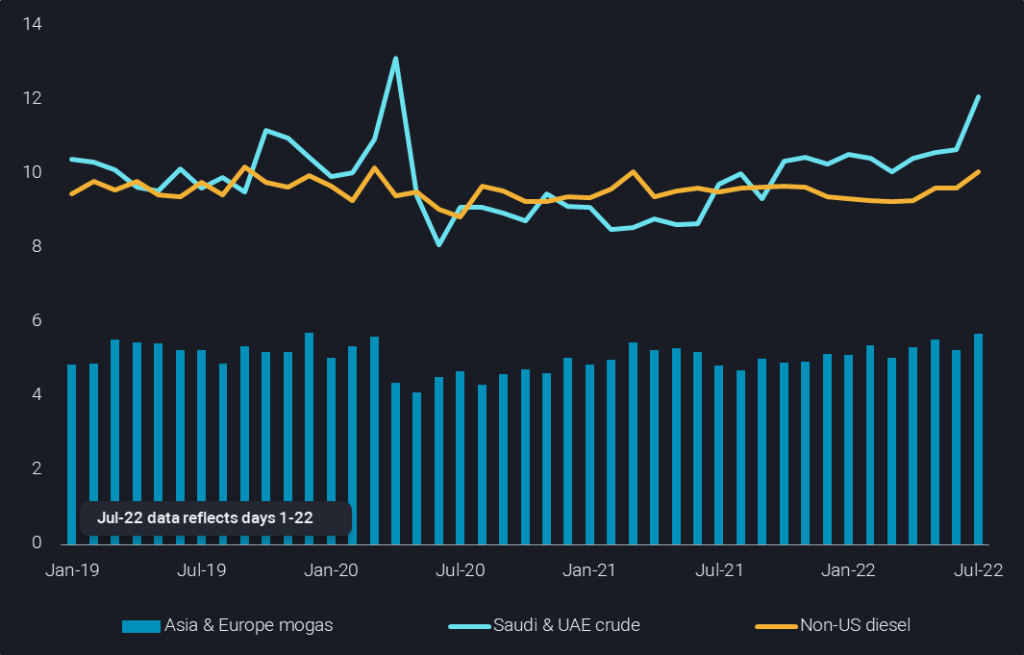 Refined products: all the focus is on diesel from here on

While crude oil is usually the focus of the financial oil trading community, recent months have clearly seen most tightness in refining operations, leading to gasoline, diesel and jet/kero cracks readings of regularly above $50/b across the globe. These times are over for now, most evidently for gasoline. Apart from strong US production that eased the domestic tightness, Asia and Europe are currently boosting gasoline liftings to a multi-year high of 5.6mbd. Many months of very low naphtha and petchem margins are partly to blame, freeing up molecules for gasoline production, while refinery utilisation has been pushed close to feasibility limits to ensure sufficient diesel supplies. Also gasoline consumption appears to suffer more from high prices than the more versatile diesel.

This brings us to the obvious star of the oil market in the next half or full year. While Europe has already significantly scaled back imports of crude and other products from Russia, Russian diesel flows remain close to the historical norm and pretty much entirely stay within Europe. In fact, July imports may even be 30% higher than the 2016-2021 seasonal average. But this is set to change from next year, with a 5 February 2023 deadline for a complete halt according to EU sanctions.

Both the United States as well as multiple other suppliers, especially in the Middle East, have hiked diesel exports in recent months. But this, combined with continued Russian flows to Europe, has failed to hinder diesel cracks from setting record after record and staying unseasonably high even in recent weeks. Russia is steadily scaling back natural gas exports to Europe, and global power generation faces multiple other challenges amid widespread extreme weather events (contributing also to nuclear power outages in France).

Consequently, diesel is set to be in high demand in agriculture (food inflation and fertilizer shortages), heating and (primary and back-up) electricity generation, in addition its dominant role as transport fuel, largely irrespective of the relative (crack) and outright price level. The US refining sector will play an even bigger role in meeting European and global diesel demand after the peak gasoline season, requiring previously unseen yield shifts from gasoline to diesel.

There is no reason to get overly bearish on crude

In spite of solid crude supplies from Saudi Arabia, the UAE and the US, as well as likely seasonally and refinery-margin-induced lower refinery run levels in the coming months, there are still various bullish supporting factors at hand, including the following: 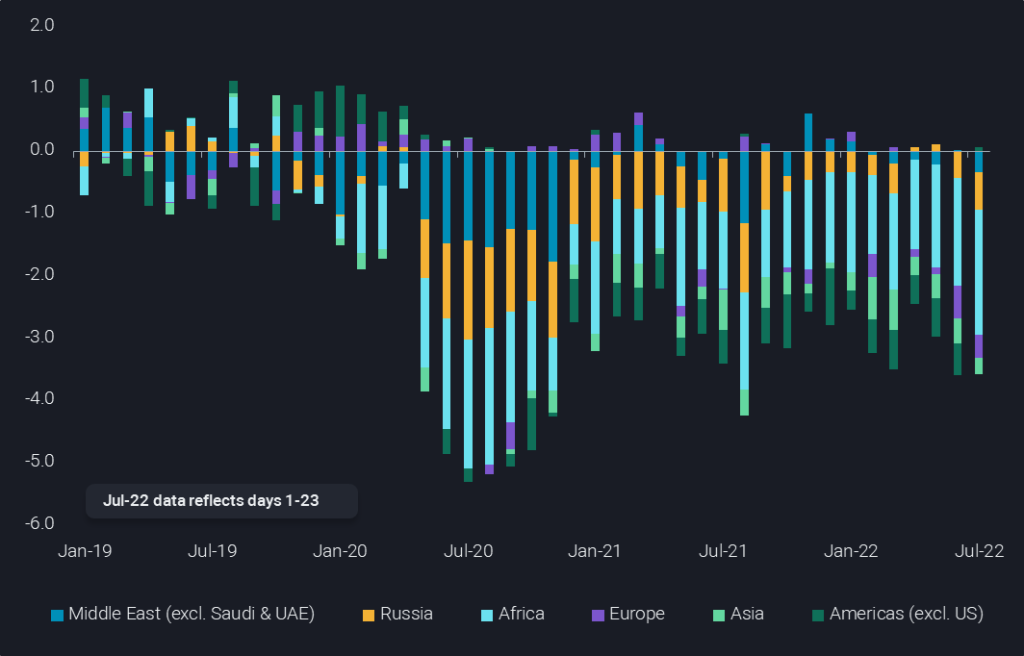