Libyan crude/condensate exports totalled an estimated 800kbd in May, continuing the decline from a yearly low in April and 350kbd lower than the 2021 average. This 30% decline from February is driven largely by oil production disruptions and port blockades, due to protests which started 17-April. Demonstrators shut down their largest oil field, the 300,000 b/d El Sharara field, and force majeure has been placed on Marsa el-Brega and Zueitina export terminals (Argus Media), reducing Libya’s ability to export normally. These blockades have been agreed to be lifted but no timeline has been provided for reopenings.

Flows to Europe, the largest destination for Libyan crude/condensates, have fallen m-o-m in May. France, Netherlands and the United Kingdom are driving the decline, but Italy and Spain-bound volumes have increased in May. Total Libyan crude/condensate exports to Europe have declined 150kbd in May m-o-m, reducing the supply of light-sweet crude in Europe. Libyan grades driving this supply shortage are El Sharara and Mellitah blend, which have declined by 130kbd and 55kbd since March 2022, respectively.

Es Sider terminal has however been unaffected by the protests, supporting the largely unchanged (m-o-m) exports of Es Sider to Europe – 270kbd in May. The increased European demand for light-sweet grades due to strong gasoline margins is reflected in the grade’s premium to North Sea Dated (Argus Media), with Es Sider assessed at a $2/bl premium to North Sea Dated as of May 24, 2022, a multi-year high. Meanwhile, as total Libyan crude/condensate exports falter, another North African supplier has seized the opportunity to plug some of the light-sweet supply deficit faced by Europe… 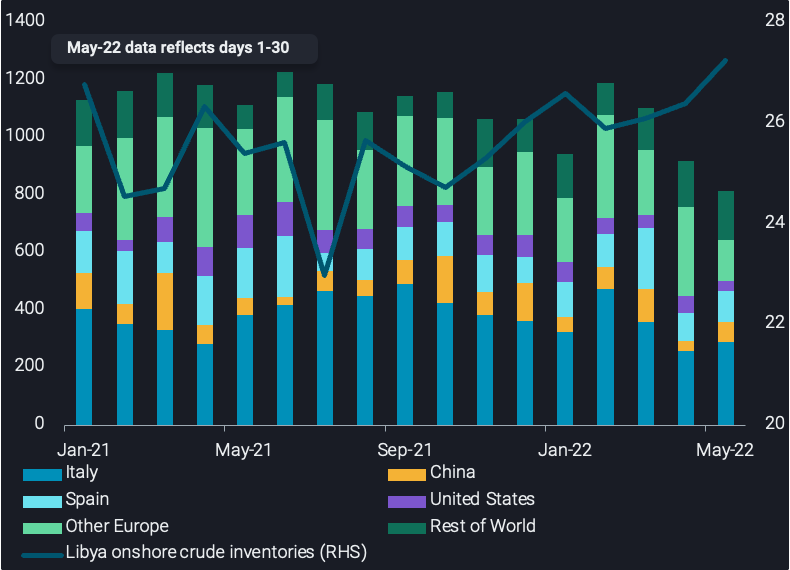 The increased demand for Saharan blend is further reflected in its widening differential to North Sea Dated, which sits at $3/bl as of 27th May 2022 (Argus), the highest in at least 5 years. This increase in European demand for Saharan blend coincides with Algeria having the ability to supply demand, as they have been increasing crude production over recent years – Algeria currently produces approximately 1mbd, a 100kbd increase y-o-y (JODI). 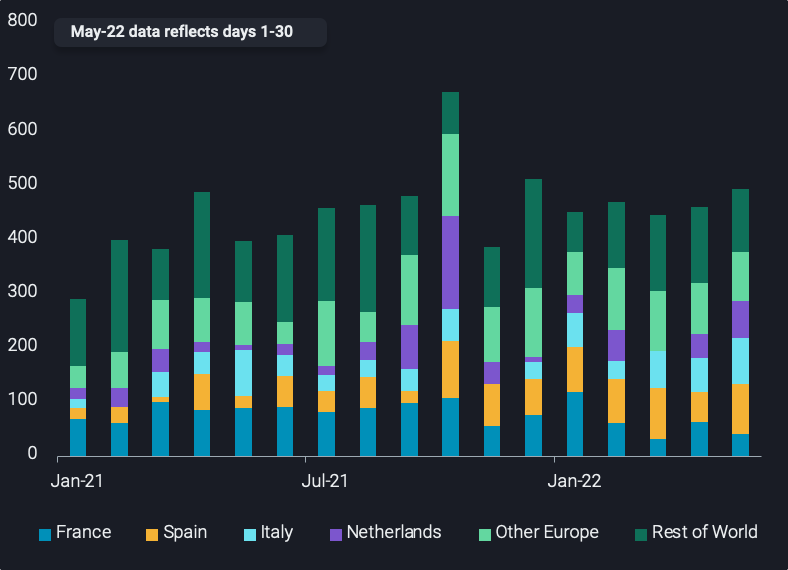 Aside from the tussle over European light sweet crude supply, North Africa is also having a growing impact on Europe’s desire to displace Russian Urals.

Egypt’s Sidi Kerir terminal is connected by the SUMED (Suez-Mediterranean) pipeline to Ain Sukhna, Egypt where Middle Eastern crude is loaded for export/re-export, mostly bound for Europe. Loadings from Sidi Kerir are an alternative source of medium-sour grades for the European market, largely composed of Mideast Gulf (e.g. Arab light).

Sidi Kerir crude loadings remain elevated at 600kbd in May, following a multi-year high in April. Firm loadings in May follow on from 770kbd in April, a 450kbd increase m-o-m and 250kbd more than the 2021 average. This two-year high in April was driven by loadings to Poland and Netherlands, up by 225kbd m-o-m collectively. Flows to Poland have continued to rise in May, as have those to Italy, but Netherlands-bound volumes have thinned.

The Mideast Gulf grades bound for Poland and Netherlands partly replaces Urals exports to various European nations which grow increasingly reluctant to import Russian crude. As Sidi Kerir loadings to Poland have increased, the export of Urals to Poland have declined over the same period, exporting 50kbd in May, down from 250kbd in February 2022. This fits with reports (Argus Media) of PKN Orlen contracting extra Saudi crude supplies from Aramco in light of uncertainty over the viability of Urals imports. 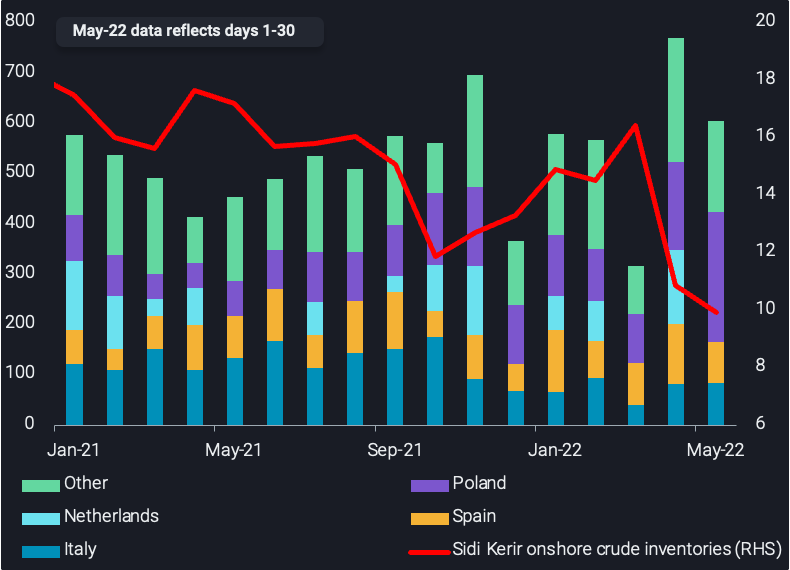 Looking ahead, Libyan crude/condensate exports may recover to more normal levels in the coming weeks, but the end of port blockades and field shutdowns are by no means a given. And Europe’s desire to wean itself off Russian Urals is only likely to intensify. With this in mind, crude/condensate (from light-sweet to medium-sour) loading from the North African region is likely to become an even more important element in determining European crude supply balances.