What is the current state of the Suezmax tanker market and how European appetite and regulation could shape the future?

The reshuffling of flows following the Russian invasion to Ukraine triggered a sustainable rally of Suezmax rates until recently, despite the fact that the tanker class lost its market share in the flourishing USG-to-Europe trade. Since late February, Middle East-to-Mediterranean (TD23) costs have surged by 130% while West Africa-to-UK Cont rates have doubled. The environment looks undoubtedly healthy when compared to the past two years. However, the rally has come to a halt over the past couple of weeks, with rates having plateaued or even declining. When studying the dynamics in the two regions (West Africa & Middle East Gulf) it is understood that the cooldown in rates was triggered by both supply and demand factors.

Demand-wise, west African crude exports towards Europe have declined in July for the 2nd consecutive month, denoting a 10% m-o-m decrease. West African crude grades, like the benchmark Bonny Light, are at a premium to WTI making them more expensive for European buyers. This has eventually trickled down to the employment of Suezmaxes, with utilisation levels dropping by one-fifth in a window of a month. 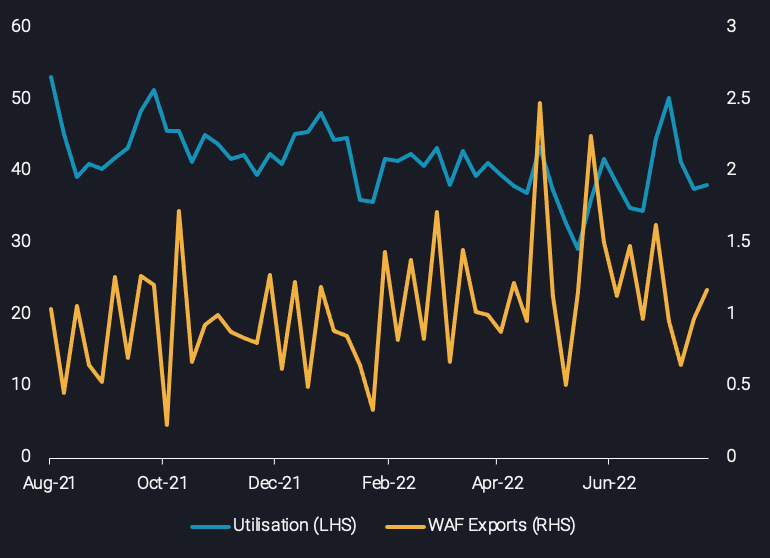 Suezmax utilisation out of West Africa (LHS – no. of vessels) vs West African crude exports to Europe (RHS – mbpd)

In the Middle East, however, the fundamentals’ landscape is different. Unlike West Africa, flows towards Europe remain relatively strong. Yet Suezmax utilisation also displays a decline since 10 July. This is likely caused by developments on the vessel supply side. Availability of Suezmaxes in the Middle East Gulf was tighter in June which may have prompted refiners to hire VLCCs out of the region for short-haul destinations. This has led to opposite tonne-mile trends between the VLCC and Suezmax mainly for cargoes heading to India but also to Europe. 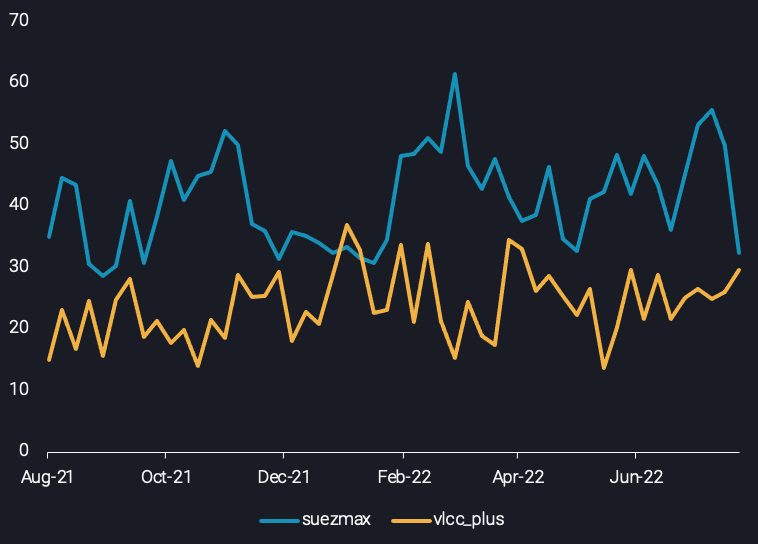 At the same time, Europe’s ever-changing appetite and regulatory changes bring alternative flows into the spotlight. This begs the question as to whether these could be satisfied potentially by Suezmax tankers. One such example is the emergence of North Sea flows, where Europe is seen to buy increasingly. North Sea supplies to Europe jumped in July by 25% m-o-m, reaching a 4-month high, nevertheless the Suezmax share thinned on the month and will remain that way. If North Sea barrels continue to cover short-distances, the smaller Aframax vessel class will be favoured. According to Argus Media, Johan Svedrup loadings are expected to rise in September. Loading schedules signal that volumes will continue to flow towards Europe, as no VLCCs, and just one Suezmax were nominated.

Another development to consider is the prospective recovery of the Libyan flows. The lifting of force majeure on oil production will bring Libyan volumes into Europe, competing with barrels from the US and the Persian Gulf. Looking at historical exports, an additional 300-400k bpd from July’s levels could potentially end up in Europe. Traditionally, this is another route where Aframax and Suezmax tankers compete. Yet the fact that a flurry of Aframaxes is ballasting towards the Mediterranean to capture Libyan stems does not leave considerable grounds for Suezmaxes to achieve a higher market share on this route.

In addition, a recent regulatory development could further impact Suezmax tankers. Due to the apparent energy supply constraints, Europe will likely allow the transportation of Rosneft barrels to third parties. These 3rd parties will likely be India and China. Such legislation reduces the risks for traders and may bring independent trading houses back into the fray. Their approach would be economies of scale, bringing in VLCCs to transport Russian crude via STS transfers to China. Furthermore, this would free up Aframax tonnage, which is currently bound by frequent direct shipments to Asia. Hence, in the scenario that we see a trading house comeback in the Russian-to-East trade – which is not certain –  this could create an additional headache to Suezmax operators via stronger competition from the Aframax segment on routes such as Cross-Mediterranean, US Gulf-to Europe, or North Sea-to-Europe.