Despite encouraging LNG pricing fundamentals, freight rates could plateau on the back of thinning US exports, reduction in tonne-miles and an influx of LNG tonnage.

Despite encouraging LNG pricing fundamentals, freight rates could plateau on the back of thinning US exports, reduction in tonne-miles and an influx of LNG carrier tonnage.

While US natural gas futures have established themselves solidly above $3/MMBTU in June, global LNG prices appear to be moving from one high to the next ever since March. Following up from our last LNG piece, we will investigate key drivers of the price rally, as well as current flow developments, and projections for the next couple of months.

On the demand side, the bumpy Covid-19 recovery path plays less of a role than for oil, given the pre-eminent role of natural gas for power generation. But related to the latter, seasonality is of essence. We currently see heat waves emerging in the northern hemisphere, including parts of the US, Europe and China, boosting the demand for air conditioning.

Meanwhile, it was eight years ago in 2013, that European storage levels have last been markedly lower at this point of the refilling season than current readings (GIE AGSI). US storage levels are not as low, but still less than the seasonal norm suggests. Accordingly, solid refilling efforts will add to running consumption in the months ahead, potentially tightening the seaborne LNG market. 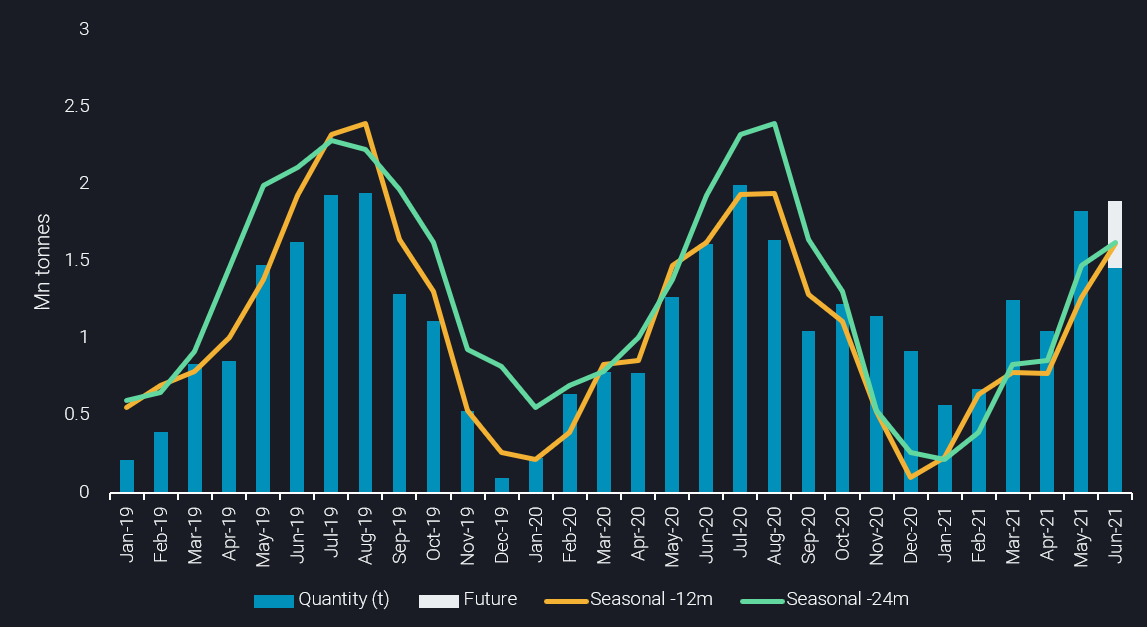 Currently two minor import markets are adding a lot of heat of LNG trade. Usually accounting for 4% of global activity, South America and the Middle East are currently taking twice as much LNG deliveries. And this share will rise further in the next two months with seasonal requirements peaking, with the final June figure also having room to the upside. While in the Middle East the cooling season is inflating requirements, in the southern hemisphere peak winter demand is driven by a mix of factors, including heating and agriculture. Furthermore, various countries are reporting declining domestic gas production, boosting the region’s import needs.

Supply-side problems are also supporting the LNG price rally in other locations, including issues at Australian export facilities. But we also see clear indications that the US will struggle to sustain its rampant March-May export levels into June and beyond. Given the slump in departures over the last two weeks and limited potential for loading in the remainder of the month, we expect US LNG exports to come in about 10% lower in June compared to May’s all-time peak of 6.35 mn mt. 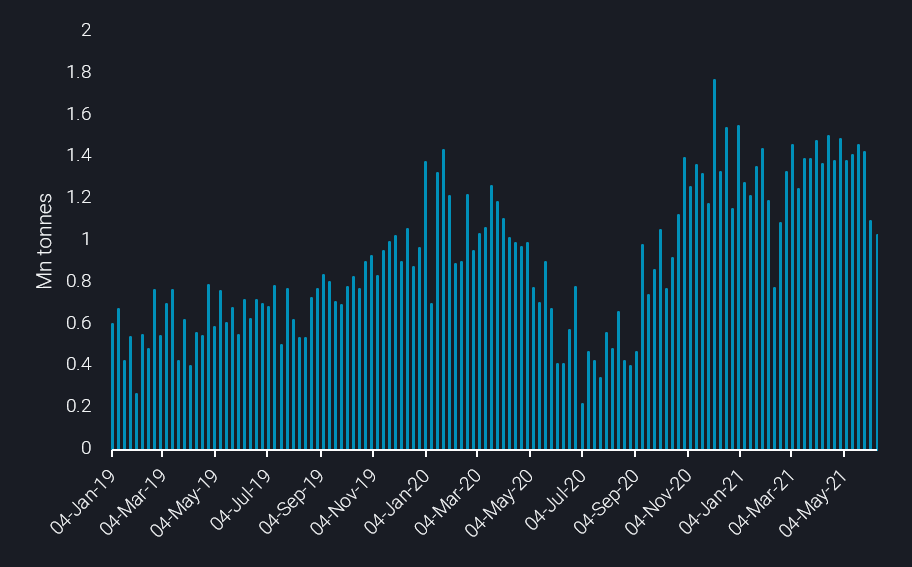 In line with booming exports, LNG carrier utilisation ex-US has surged over the second quarter of 2021. 85 LNG carriers were in transit from the US on May 16, recording an annual high and a 77% increase when compared to the abysmal period at the end of February. In a similar fashion, freight rates for the benchmark USG – Tokyo route have almost doubled in the quarter, according to Argus Media, as displayed in the graph below. 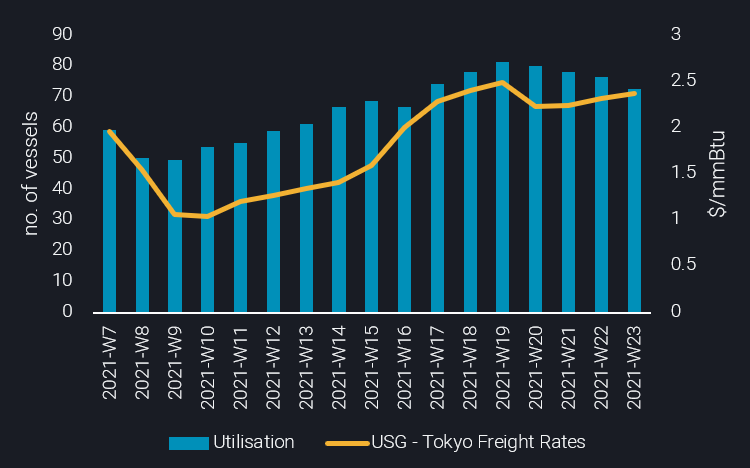 Looking to the next quarter, however, LNG freight rates may diverge from LNG prices. Taking another look at the graph, a slowdown in vessel utilisation is observed during June. This development is aligned with slowing exports, which may not fully recover in Q3 amid rising domestic consumption and ongoing stockbuilds.

On the supply side, the availability of ballasting LNG carriers is high in historical context in spite of the recent tightening due to the steady addition of new ships. Furthermore, seasonal peak demand in the Middle East and South America will primarily be met by nearby suppliers, taking away tonne-mileage. And for Europe, more local piped supplies are in sight with the commissioning of North Stream 2 and improving pricing conditions for all Russian supplies. The latter developments may also herald the end of the steady upwards trend for natural gas prices, making room for a more volatile, albeit generally supportive, price picture.