The recent bonanza of exports enjoyed by LNG producers such as the US, fuelled by a demand crunch in Asia, has rippled through freight markets for LNG carriers.

The recent bonanza of exports enjoyed by LNG producers such as the US, fuelled by a demand crunch in Asia, has rippled through freight markets for LNG carriers. Despite LNG cargo prices now gradually easing, we see LNG freight strength set to continue until at least end Q1 2021, amid European demand and ongoing congestion.

Availability in the Atlantic basin disappears, as utilisation surges

Colder-than-average winter weather conditions in Asia, coupled with relatively low storage volumes, boosted the price of spot cargoes for LNG. LNG freight rates followed suit, increasing two-fold to reach a record-high since assessments first began, according to Argus pricing data for the PADD 3 to Tokyo route via the Panama Canal. 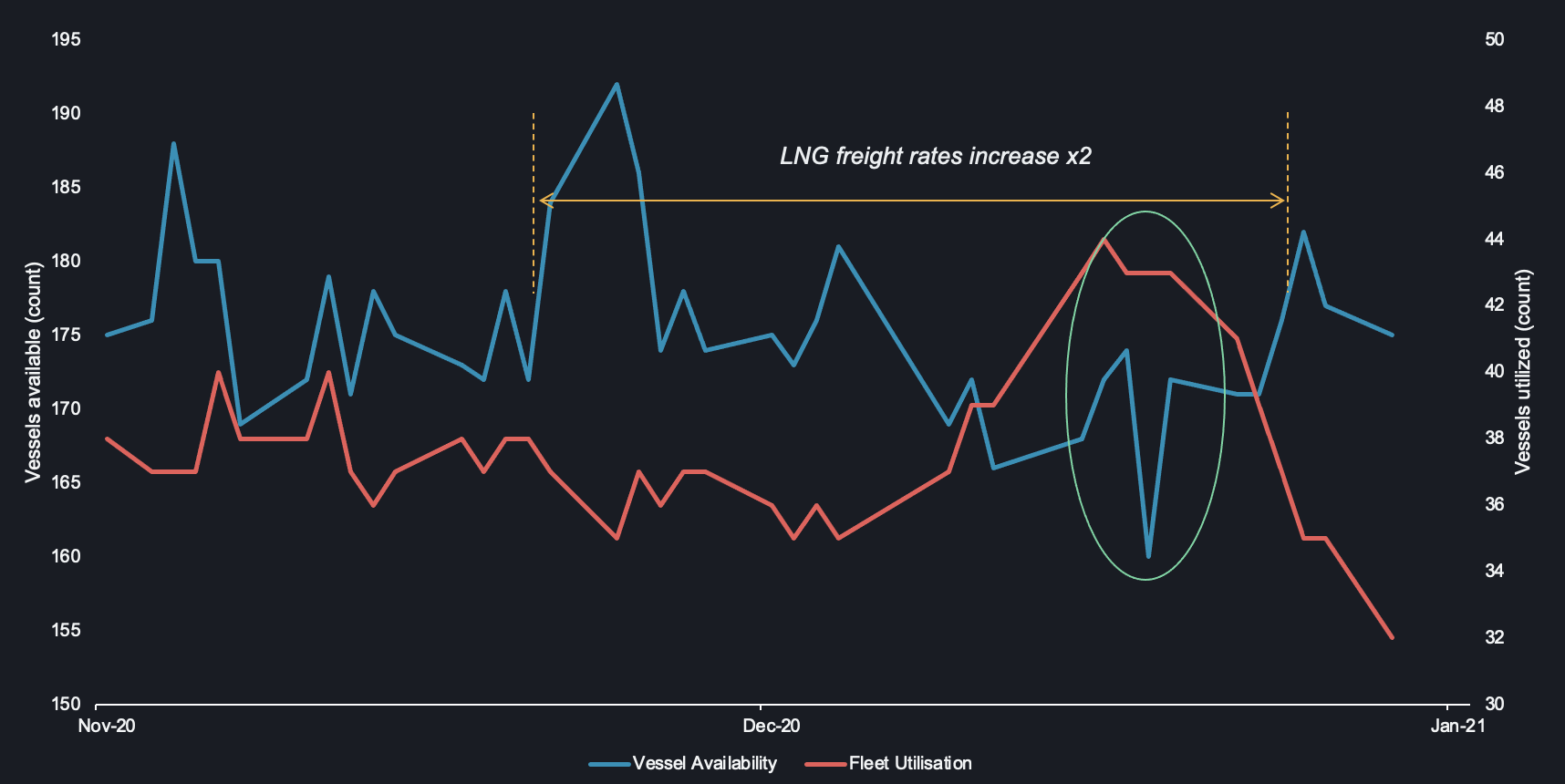 Our freight data shows that vessel availability at Sabine Pass over the last 90 days, as well as utilisation on the PADD 3 to Asia route, experienced dramatic inverse swings to help boost voyage rates to record-highs.

Vessel availability of LNG carriers at Sabine Pass decreased 17% over the course of three weeks from December 14, 2020 to January, 7 2021, marking the fastest removal of tonnage observed by Vortexa over the last 90 days. Availability plummeted as record-low temperatures in North Asia led to a flurry of bookings towards the year-end, concurrently with an all-time high of US LNG exports in December of 2020.

As delays started appearing in the Panama Canal, a waypoint favoured by LNG cargoes heading to the Far East (or in this case, the westwards across the Pacific), utilisation shot up by 26% along the PADD 3 to Asia route over the same period over late December-early January. Tonnage was kept employed longer as ships were held in congestion or decided to transit through alternative waypoints such as the Cape of Good Hope, further boosting freight rates.

Future prices are already starting to soften for March contracts, which could ease the current levels of freight rates. But with demand from Europe now set to increase to refill storage in Baltic and North West European countries and ongoing congestion, ships remain scarce and we predict elevated freight rates until at least the end of Q1 2021, even as cargo prices ease.

In the News – LNG