Event highlights: On the road to recovery, Asia’s crude and products trade flows in 2021
Share

Delve into this discussion about Asia’s recovering crude and product trade flows post-pandemic, and what it means for the global markets.

Our ‘On the road to recovery: Asia’s crude and products trade flows in 2021’ webinar was hosted by Vortexa Lead Market Analyst, Serena Huang and Product Specialist, Teo Rui Jie on 16 March, who together discussed the outlook for Asia’s trade flows and freight markets. 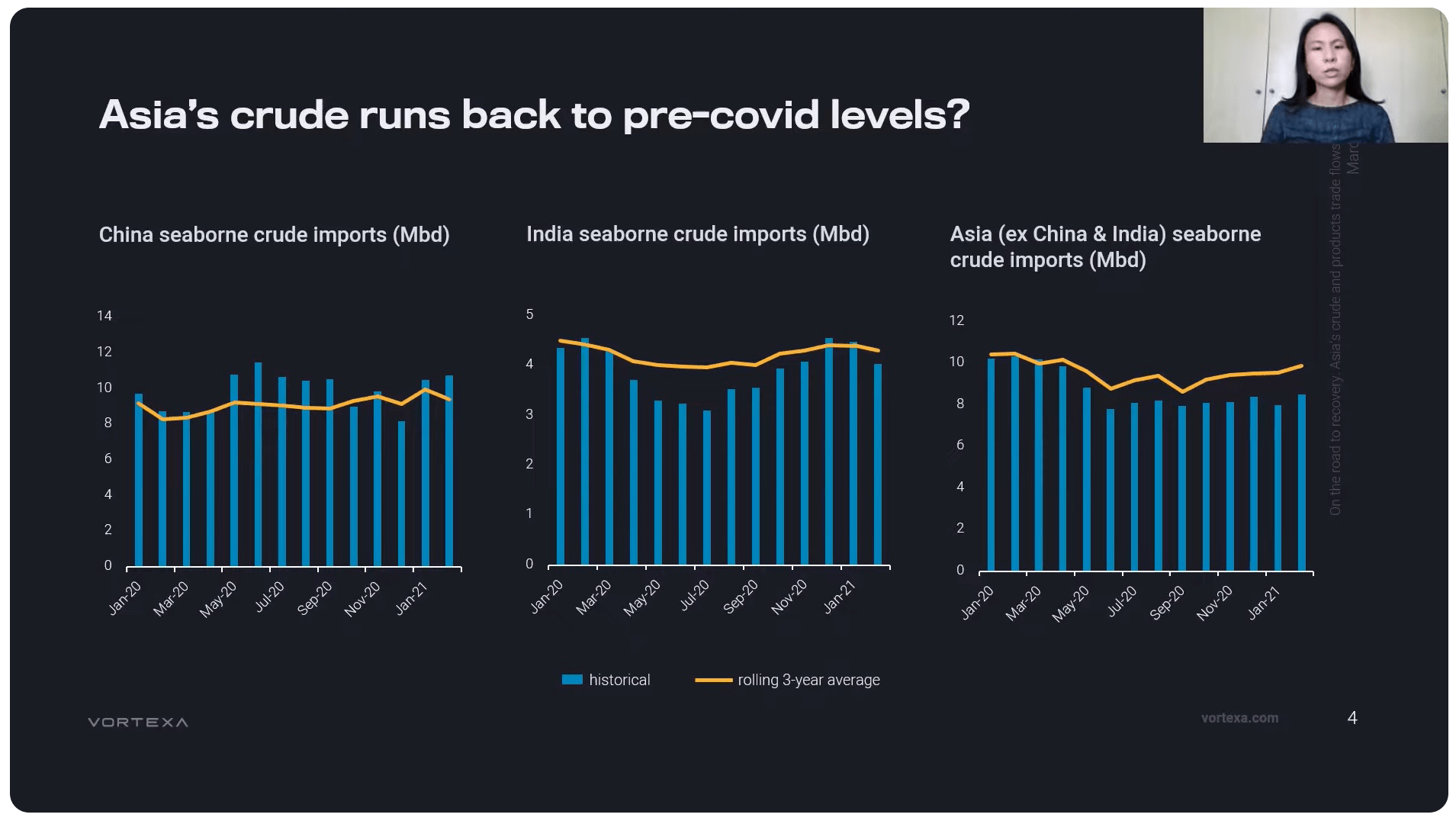 Serena and RJ drew upon Vortexa’s data to illustrate the rise in Asia’s crude and refined products trade flows, amid the new trade patterns brought about by refinery start-ups and rationalisations within the region. Key takeaways from the session:

Here are some of the questions that our analysts addressed during the webinar Q&A.

Q: Do you think oil prices will remain in the $60 to $70/barrel range this year?

A: Looking at the factors that have contributed to the run-up of oil prices this year, there is an expectation of global oil demand recovery with ongoing mass vaccinations and falling infections supporting a rise in consumer spending and global economic activities.

On the supply side, the OPEC+ surprised the market with their commitments to rollover production cuts to April in their last meeting, with Saudi Arabia maintaining its additional 1Mbd of production cuts, despite the strong rebound in oil prices at the start of the year. OPEC+ views this as a strategic decision that is key to facilitate the ongoing market rebalancing to maintain a stable oil price.

Both OPEC+ and non-OPEC seem to be committed to keep their production under control this year. If the market continues on a healthy rebalancing, we could expect all prices to remain elevated.

Q: How do you think Asia’s refining margins will perform this year?

A: Asia’s refining margins have performed better this year compared to last year with the improving prospects of product cracks, but still remains challenging for many refiners. Across the barrel, I would say that gasoline has been the best performer in terms of growth, as refiners turn down their gasoline production, which coupled with demand recovery, has tightened the market.

Diesel comes in second. Whilst demand recovery has been robust, and possibly stronger than gasoline, refinery supplies have far outpaced demand growth, which has led to the tumbling of diesel cracks from the highs seen in recent weeks.

Margins have not recovered as strongly as refiners would like, being dragged down by the run up of crude prices at the start of this year. The rise in crude prices, passing on to higher retail gasoline and diesel prices, would also have a dampening impact on demand recovery, and in turn a knock-on impact on refining margins. Overall, refining margins will be better than last year, but it could still be a challenging year for some refiners in Asia.

Q: Will Asia see more biofuel refineries this in the next few years?

A: The future and viability of biofuel refineries will be very much driven by government policies and mandates, as the cost of biofuels production is still more expensive than conventional fuels production. So in that sense, the US and Europe will lead the way, as oil demand is peaking and governments are accelerating efforts to curb carbon emissions in these regions.

Many of the older refineries in the West are facing growing competition from new refineries in Asia and the Middle East, eroding their margins and making it increasingly challenging for them to maintain their operations. Instead of shutting down, which will incur hefty costs of equipment dismantling and land restoration, the conversion to biofuels refineries has become an attractive alternative for many refinery owners.

But Asia will play an increasingly important role as the source for biofuel feedstocks for the West, including palm oil, rapeseed oil, used cooking oil etc. In fact, we are also starting to see nascent efforts towards raising biofuels production in Asia. Indonesia’s Pertamina, for example, has recently trialled biodiesel production at its Cilacap refinery, and building units at its Plaju refinery to produce biofuel.

Overall, we can expect an acceleration of biofuel refineries in the US and Europe, with Asia, trailing behind if supported by more government mandates on cleaner fuels production.

Make sure to watch the webinar to see the full breakdown of Asia’s recovery in crude and product trade flows for 2021. If you also want to keep up to date with all our webinar and events, subscribe to our Insights newsletter.