Calls on OPEC+ to raise crude supply faster than originally planned may not be the silver bullet some consuming nations expect as Vortexa data shows that OPEC+ sweet crude supplies are not keeping pace with sour barrels.

Major oil consumers have called on OPEC+ to raise crude production further and faster in a bid to tackle rising energy prices and inflationary concerns. But would a supply boost over and above the current trajectory really help? An analysis of Vortexa’s crude exports data reveals apart from concerns about overall OPEC+ supply levels there is a deeper issue of the group’s ability to supply the right type of crude.

Total OPEC+ seaborne exports have steadily risen from a trough of around 23.6mbd in June 2020 to 27.5mbd last month. But as we have mentioned in previous insights, much of this rise is on the back of stronger Saudi Arabia and UAE exports, and recently also Russia, all predominantly of sour quality. 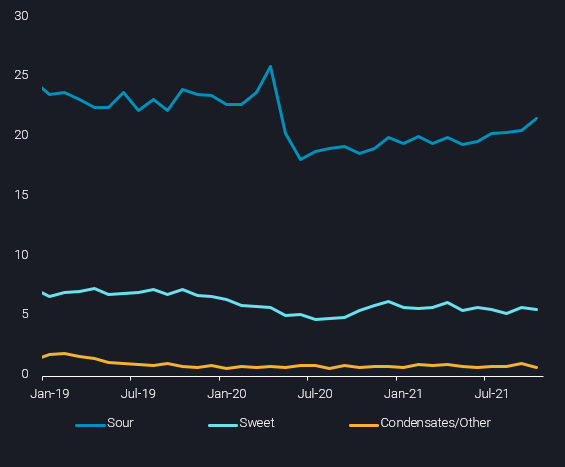 From the perspective of the global refining system, the marginal demand appears to be for sweet rather than sour crude. Rising gas prices have boosted the cost of hydrogen, the core component in desulphurisation processes. As a result, the cost of refining sour crudes vs sweet crudes has swelled. Rising demand for sweet crude can also be seen in wider premiums for WTI (sweet) over Dubai (sour) over recent months – coinciding with accelerating nat gas prices. Stronger demand for gasoline, as seen through firmer gasoline margins in Europe and especially Asia have also supported light-sweet crude more broadly. Finally, there is a clear call for higher refinery operations, which at the margin favours light-sweet crude barrels, as the recently non-operating capacity tends to be of lower complexity. 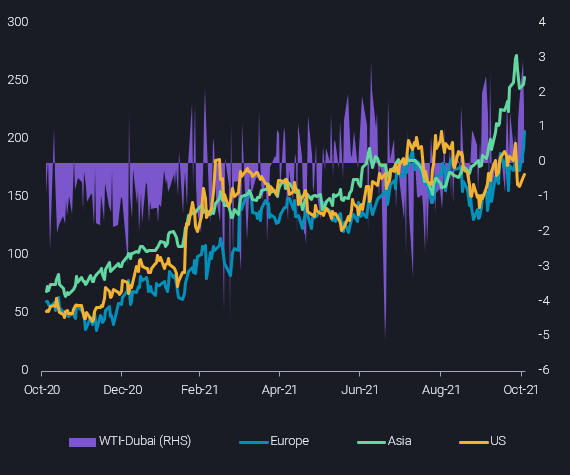 On the whole, OPEC+ has struggled to boost sweet crude exports in the same way it has done with sour crudes. West Africa, the largest producing region for sweet crude in OPEC+, has fared the worst, while Caspian sweet crude supplies have also fallen from pre-covid levels. Only the Mediterranean-North Africa region has shown some improvement recently. 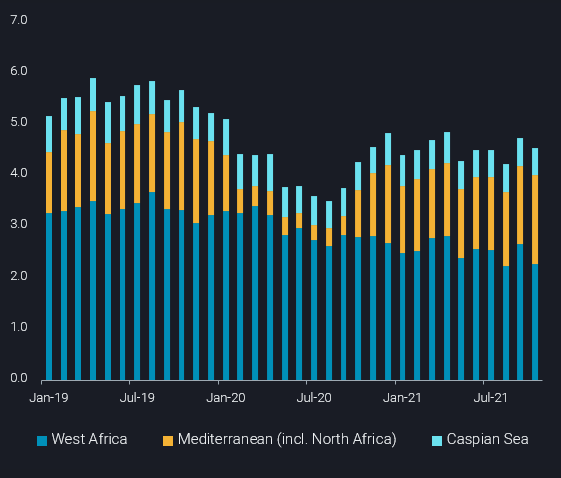 Nigeria and Angola, OPEC’s largest sweet crude exporters, have struggled the most with raising exports due to a combination of natural production declines and infrastructure issues. Combined exports from both countries fell 380kbd mom to 1.9mbd in October.

Caspian Sea exports of Azeri Light have also been relatively weak, with October exports down marginally mom to around 500kbd, substantially lower than the 2019 average of 620kbd.

Libyan sweet crude exports have not suffered the same fate and have held above the 1mbd mark so far this year, after a long outage was overcome in Q4 2020. Vortexa data shows a very slight mom gain in exports from 1.03mbd in August to 1.14mbd in October, but this is overshadowed by lower Nigerian and Angola exports.

Looking ahead, Algeria could emerge as a marginal supplier sweet crude – most likely Europe. The country has been able to lift exports every month (mom) since May. October exports fell just shy of 600kbd, the highest monthly total seen since February 2019.

Could higher OPEC+ exports also induce a rise in US crude exports?

Usually US shale players will have a close eye on OPEC+ policy from a competitive point of view, fearing a loss in market share and pressure on outright prices. But at this point in time, the situation may be different. More and more market participants agree that the overall supply picture will remain tight going forward (listen in to Clay Seigle’s interview on CNBC). And crude quality considerations and relative pricing could even incentivise higher US crude exports.

Under the backdrop of rising OPEC+ sour exports and rising desulphurisation costs, US refiners will be well positioned to digest more sour crudes and more Russian dirty feedstocks/fuel oil. This is thanks to more complex refinery set-ups and much cheaper natural gas and hydrogen costs. In doing so, US light sweet crudes would be freed up for export especially to Europe, but potentially also Asia. Refiners in these markets are faced with the challenge of producing more of all clean products, but with a strong eye on low processing costs and hydrogen needs.

If the above considerations materialise, it would also give a boost to dirty freight markets, as widening crude quality differentials allow for more long-haul shipments of both sweet and sour grades.