Asia’s chase for naphtha amidst a global shortage
Share

The peculiarity of a global gasoline tightness even as the western hemisphere heads into winter and the seasonal rise in ethylene cracker runs in the east has led to an intensifying competition for naphtha molecules. Asia’s naphtha cracks are barreling to multi-year highs that show no signs of abating.

The peculiarity of a global gasoline tightness even as the western hemisphere heads into winter and the seasonal rise in ethylene cracker runs in the east has led to an intensifying competition for naphtha molecules. Asia’s naphtha cracks are barreling to multi-year highs that show no signs of abating. 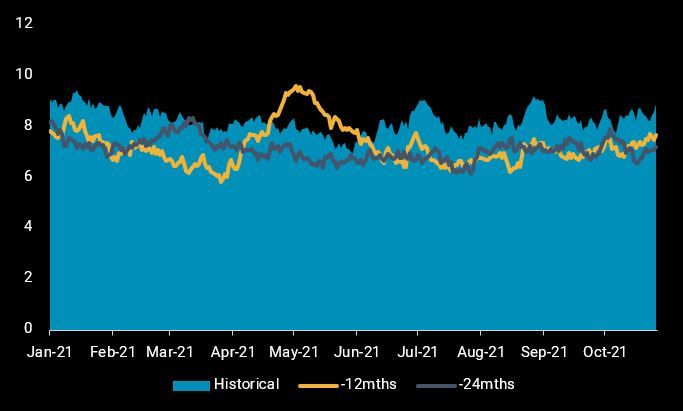 Despite rising naphtha premiums, robust ethylene cracker and gasoline blending margins in Asia have pushed up naphtha demand, with arrivals into the region projected to reach 6.3mt in October, the highest seen since last June, according to Vortexa’s data. Imports from Mideast Gulf (MEG) have climbed by four consecutive months to 3.8mt this month, hiking employment of LR1 tankers to the East. Competitive MEG – East Asia LR1 tanker freight rates to that of LR2 tankers in September have boosted the appeal of the former, due to its advantage of enabling a direct load and discharge for smaller parcel sizes, versus the need for co-discharges at multiple terminals if loaded on larger LR2 tankers. But this comparative advantage has been eroded from mid October as LR1 tanker rates rose above LR2, which has swung demand back to the latter. 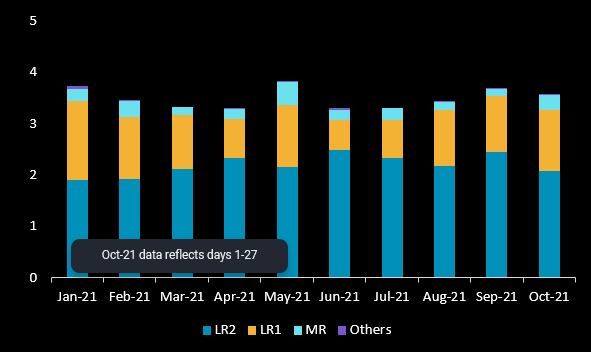 Naphtha exports from West Med and US Gulf Coast (USGC) to Asia remain thin this month amidst a closed arbitrage. Around 90kbd (or 50%) of West Med naphtha exports are headed to the UK Continent (UKC), the highest seen since March. Only two LR2 cargoes have loaded from Skikda for Asia this month, compared to the year-to-date high of seven cargoes in July. Asia-bound naphtha cargoes from the US Gulf Coast are also on-track to reach a 14-month low of 40kbd, losing out to the strong pull from South America and UKC.  With gasoline tightness in the western hemisphere expected to persist through this quarter, we see limited upsides on arbitrage naphtha exports to Asia. 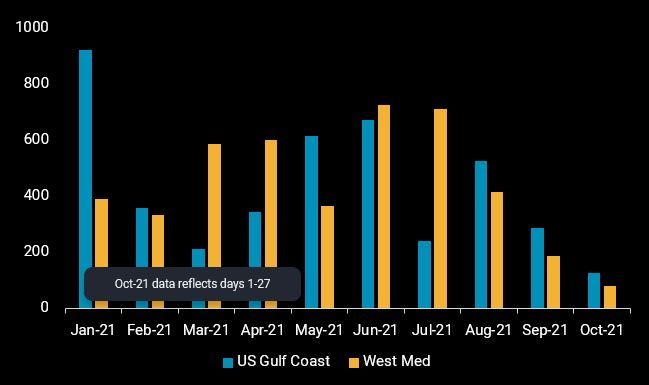 It is interesting to note that two Novatek naphtha cargoes loaded from Ust Luga en route to Asia have opted to take a longer route around Cape of Good Hope, instead of via the Suez Canal. While a narrow naphtha front-month spread means that the difference in delivery time is less consequential, the longer voyage distance in an environment of rising bunker prices would likely translate into higher delivery costs that are either incurred by the shipowner or priced into the charter rates.

Condensates to the rescue? Not exactly

Meanwhile, Asian refiners have stepped up condensate purchases in recent months to supplement their naphtha supplies. Condensate loadings to Asia climbed for three consecutive months to 500kbd in September, but volumes are cooling to 380kbd this month underpinned by a sharp decline in Australia’s exports. 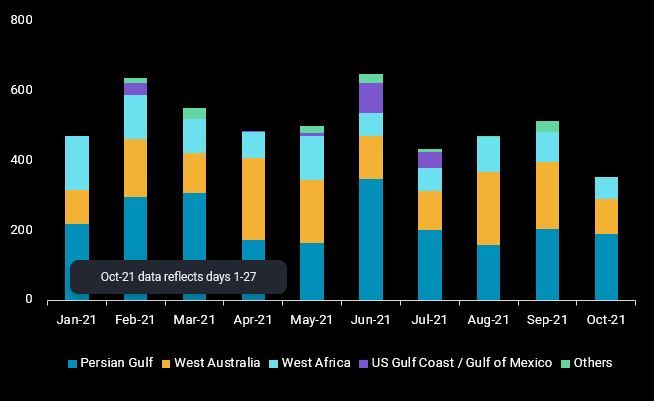 Besides Qatari condensates, the economics to import condensates from producers in the west are still not appealing enough to drive an uptick in imports by Asian refiners. A continued optimisation of naphtha yields or the processing of more light-sweet crudes would be more favourable, up to the limits of refinery technical constraints. Looking at the current trajectory, Asia could be bracing one of the tightest naphtha markets seen in years this quarter.