China recently lifted almost all of its travel restrictions and quarantine requirements in a sudden shift away from its zero-Covid policy towards a full re-opening of its economy, taking the market by surprise. Demand recovery, however, is far from imminent given the infection waves across the country which have crippled mobility and economic activities. Based on comparison against previous years, the recent allocation of crude import and product export quotas to refiners signal the government’s intent to incentivise refiners to maintain strong refining runs, whilst hoping for domestic demand to recover into Q2. Quotas in the second half of the year are likely to be pared back, as the government returns to its course of controlling its carbon emissions.

Although the combined first two batches of 2023 import quotas, with the second batch out last week, declined by nearly 20% from the first two batches issued in 2022, the third batch will likely come earlier this year, and qualified refiners may still get quotas for next year in advance, as they are encouraged to maintain strong run rates throughout the year.

This trend does not go against the government’s plans to eliminate excessive, inefficient processing capacity in favour of integrated and more technologically advanced complexes, as refiners who had their refining capacities removed in Q4 2022 as part of Shandong’s industrial integration and upgrade, or failed the tax investigations in Q3 last year, were not given any quotas for 2023.

The early release of crude import quotas has seen Iranian crude arrivals surging to a new record in December, with the lion’s share finding home in Shandong province, as local independent refiners have largely turned to discounted crude grades since 2H 2022 amidst sluggish domestic fuel demand and depressed refining margins. 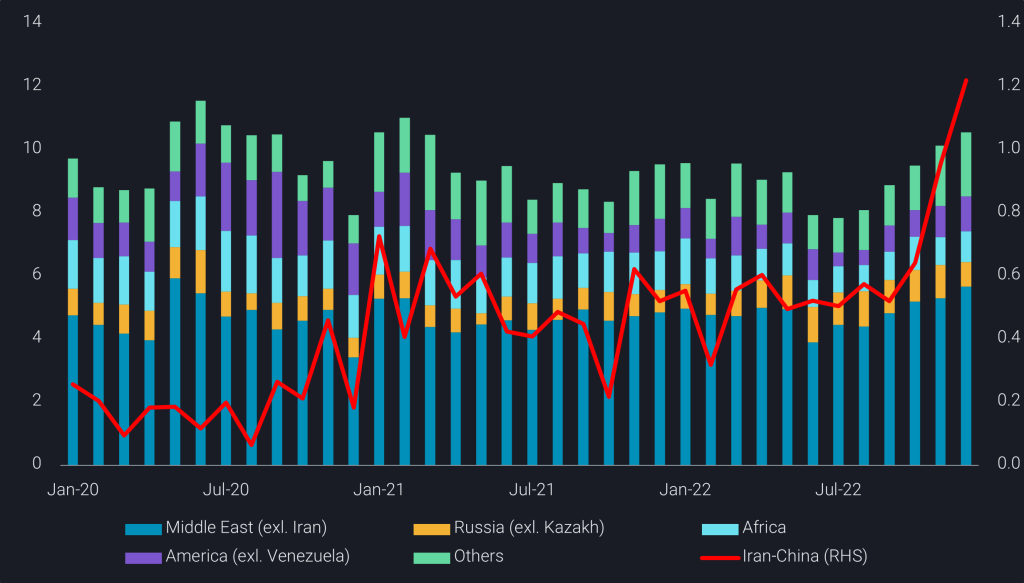 Last week, Beijing also issued the first batch of 2023 product export quotas to the state-run refiners and independent oil giant Rongsheng, up nearly 50% from the same batch for 2022, as domestic fuel demand is still weak after China removed most of its Covid restrictions.

The recently started independent Shenghong’s greenfield refining complex didn’t win any export quota in this round, while State-run PetroChina is unlikely getting additional quotas for the upcoming Guangdong refinery in the year, as it will shutdown its similar-sized Dalian plant once the Guangdong plant commences on-spec production. In addition, the 19mt issued for 1H 2023 is lower than the 29.5mt issued for 1H 2021, or the additional 13mt for Q4 2022, which signals that Beijing still aims to reduce carbon emissions and unnecessary crude consumption this year.

Chinese refiners have exported nearly 34mt of clean fuel in 2022, with monthly exports surging to an all-time high to 6.8mt in December, after Beijing issued an unusual batch of export quotas in late September to ease stock pressure and support economic activity.

If the refiners continue to utilise the remaining 2022 quotas in Q1 this year, China’s product exports are likely to remain doubling year-on-year in coming months. The government will also likely reduce the subsequent batches of export quotas to limit the total exports this year, as domestic fuel demand is expected to recover from Q2 as economic activities rebound. 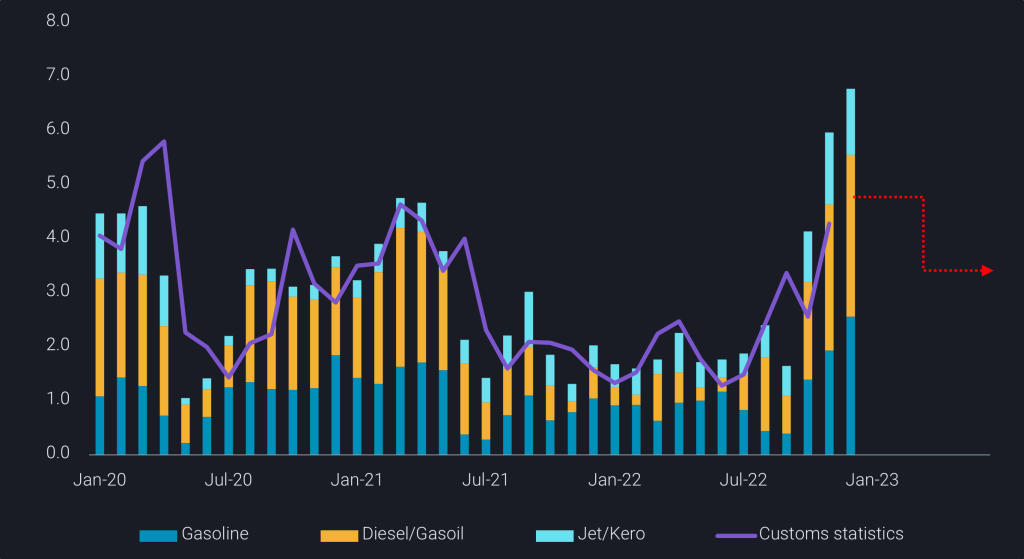