The global explosion of floating storage after the onset of covid-19 and the crash in global oil demand was not only concentrated to crude oil, but also led to dramatic changes across the refined products spectrum. This insight reviews the subject of clean petroleum products (CPP) floating storage, and namely its three main components gasoline, diesel and jet fuel. How are offshore floating storage volumes for these products faring globally, and what regional dynamics can we see? 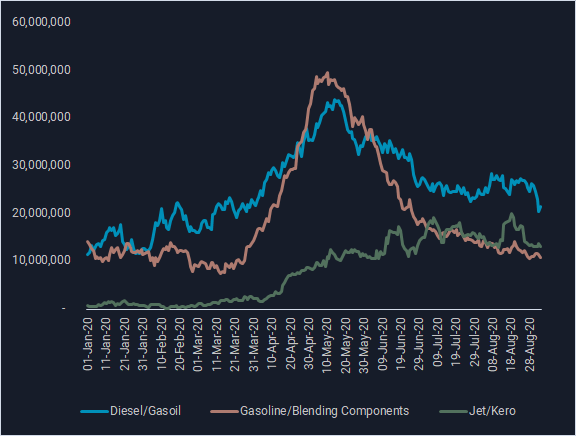 Back in March, Asia was the first region seen to be accumulating CPP in floating storage, in line with it being the first region to introduce widespread movement restrictions. Since then we saw sharp volatility for floating storage volumes across products in Asia. Volumes wound down between May and July but persistently weak diesel, in key export markets such as India and China, demand has kept offshore inventories elevated. 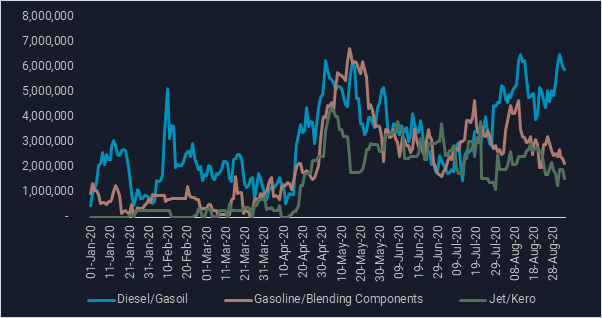 Over the course of the pandemic, Europe attracted much of the surplus diesel and jet fuel coming from the Asia, Middle East and the US. Subsequently Europe is now home to the largest share of middle distillates floating storage.

But as the European summer draws to a close, the seasonal peak in jet fuel demand for the year has already passed. Meanwhile, large diesel consuming nations – such as UK, France and Germany – are grappling with an economic downturn, curbing import demand. 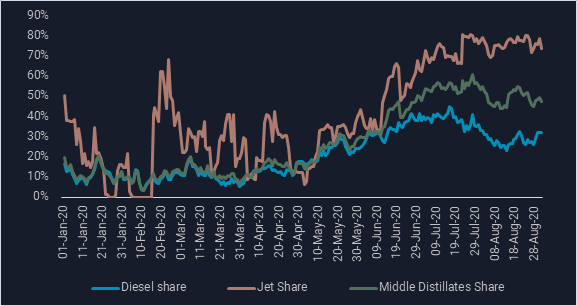 Gulf of Mexico: Wind down complete?

Unlike Asia and Europe, CPP floating storage activity in the Gulf of Mexico has all but normalised to pre-covid levels. During the period of peak demand loss (March to June), the majority of CPP floating off the US Gulf Coast, Mexico and/or the Caribbean was gasoline – most of which struggling to clear into Mexico. 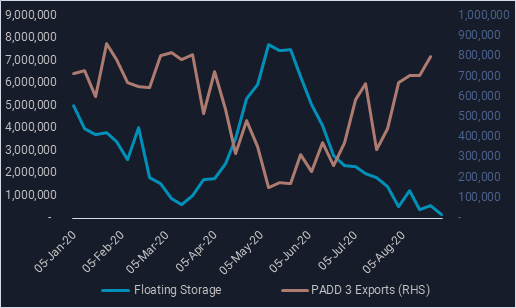 The arrival of the US driving season, in conjunction with a massive reduction in PADD 3 domestic gasoline output has helped clear offshore inventories (see chart) and is likely to prevent any build in offshore gasoline volumes in the near future.

Looking ahead, one factor to watch in the US is the impact of rising onshore diesel stocks. With EIA reporting distillate inventories at multiyear highs, and limited demand for surplus product into Europe and Latin America, US diesel floating storage volumes could rise.

Interestingly this month will see the arrival of two newbuild VLCCs laden with middle distillates from Asia and the Middle East into US waters, an unusual destination given that previous such cargoes have tended to head to Europe and/or west Africa: