While floating storage is declining around the globe on high prices and steep backwardation, VLCCs of Saudi and UAE oil are clustering outside Zhoushan, China.

With oil prices slowly but apparently surely approaching $90/b and backwardation strenghtening, any type of oil stocks can be expected to draw. This is also the case for floating storage – with one notable exception catching eyes.

At the end of Q2 2020, more than 200 million barrels (mb) of crude oil was floating on tankers, being 7 days or more stationary. This was a function of OPEC+ countries having temporarily battled for market share in spring, at a time when oil demand was eaten away by the first global wave of Covid-19. Oil prices had fallen to very low levels, with deep contango making crude more valuable while sitting and waiting offshore. Looks like a far distance now – only the coronavirus is still causing trouble.

Currently, crude on floating storage from any other country than Saudi Arabia and the United Arab Emirates is just above 50mb, marking a post-Corona low and a 71% decline from June 2020 levels. 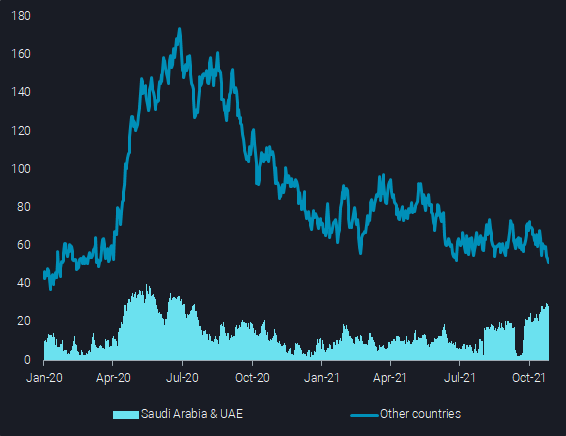 The situation is however very different for Saudi and UAE grades abord VLCCs offshore Zhoushan in China. The two countries are responsible for the huge majority of crude export increases from the OPEC+ group. In fact, Saudi Arabia and the UAE have added 1.6mbd of supplies to seaborne markets since April (when production quotas started to be relaxed in steps), while all other OPEC+ countries saw their volumes shrinking by 1.2mbd.

It looks like as if the two countries are struggling to place their marginal volumes to final customers, with now close to 30mb of crude on floating storage, which compares to 10mb on average over the first seven months of 2021. It is also true that only China is taking more crude from the two countries, when compared to 2019 levels, while other key buyers have yet to fully resume buying from these key suppliers at pre-Covid levels.

But the floating storage build-up off China is not due to a general lack of demand in the country, as onshore crude stocks have been drawing at a rate of about 1mbd over the last two months. It is rather a question of the very specific crude procurement framework in the world’s biggest importer. Independent refiners were kept short of crude import allowances this year and only received additional quotas over the last two weeks. One player specifically, Rongsheng, may have been too optimistic with its buying activity, potentially now struggling to digest all the arriving barrels. Other buyers, acting as middlemen between producers and smaller independent refiners, may struggle to find local buyers amid a raft of government regulations aimed at the curtailment of inefficient and poluting operations in a market struck by overcapacity.

Nevertheless, the current, probably temporary difficulties in placing marginal crude barrels suggest that the market is not yet falling dramatically short of oil supplies. This will be noted by OPEC+ decision makers ahead of fresh meetings next week, and probably hold them back from speeding up supplies to market beyond already agreed targets. It may also mean that product prices and refining margins need to rise even more before refiners act more decidely on the crude procurement front.