Seaborne crude/condensate arrivals around the globe rose marginally 250kbd m-o-m in November, with liftings staying essentially unchanged. However, global onshore inventories grew for the second consecutive month in November, close to 50mb or 1.6mbd. The fact that crude inventories have been building throughout the year, even though crude arrivals have not moved as much, paints a pessimistic picture of world oil demand, with negative momentum accelerating in November.

Rising seaborne supplies and onshore inventories are putting pressure on crude prices – as seen with ICE Brent futures reversing into contango at the end of November. Meanwhile, with the unprecedented situation of EU sanctions and the price cap on Russian oil coming into effect this month, OPEC is tentatively waiting for the actual market impact before making their next moves. 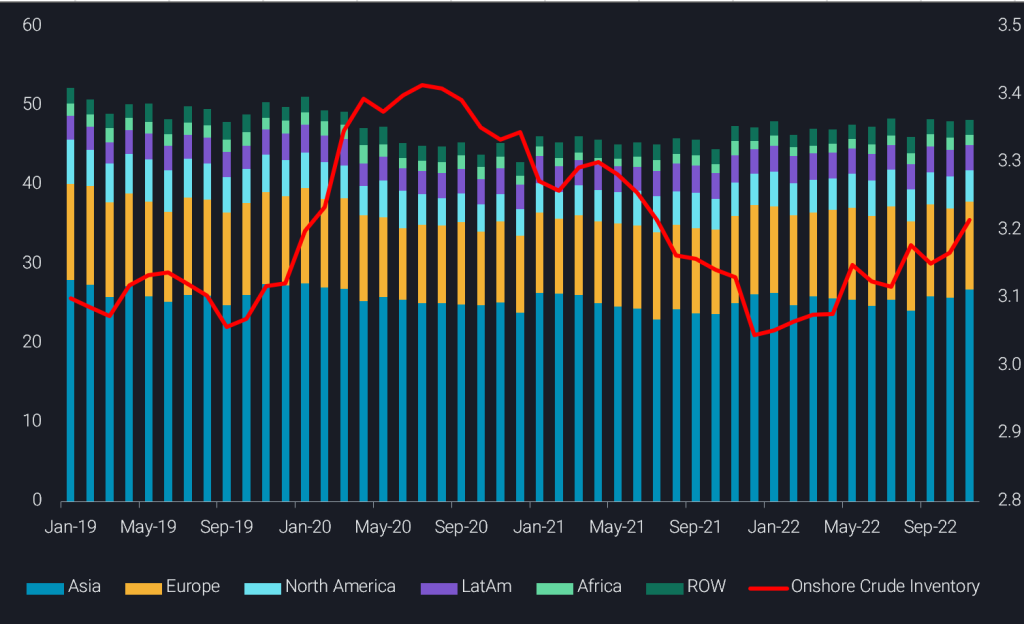 Exports of Russian crude remained stable in November around 3.1mbd ahead of European sanctions taking effect. The huge majority of Russian crude oil will not target either China or India. November seaborne arrivals into these two markets have been slightly up m-o-m to 2mbd, while remaining below their June high. It remains questionable whether enough buyers can be found in these two markets, with little Urals currently on the way to China for December discharge.

Regardless, the biggest problem currently is Turkey’s blockade of the Bosporus and Dardanelles, holding up around 25 Aframax and Suezmax tankers at the time of writing. Curiously enough, only two of these tankers appear to carry Urals crude, while all the other cargoes are Kazakh-stemming grades, according to our assessment. Turkey is demanding extra guarantees from insurance companies to cover potential accidents in Turkish waters, which insurers are unwilling and/or unable to give for cases where provided information on individual shipments is proven to be incorrect later on.

Chinese crude imports rise to a level that looks unsustainable

European imports of crude/condensates are down m-o-m for the second consecutive month to 8.4mbd. Noticeably, there has been an uptake in cargoes from the US. The US is currently exporting at record levels, and due to its proximity to Europe and its need to phase out remaining Russian imports, flows have been on the rise in November.

China’s seaborne imports exceeded 10mbd for the first time since March 2021, up for the fourth month in a row. Arrivals from all regions have either been stable or increased, apart from Africa which saw a 200kbd m-o-m decline, as the October spike in flows proved unsustainable. The increase in Chinese crude/condensate arrivals has led to a rise in stocks throughout November by 1.1mbd or 31mbbls, with stocks reaching the highest level since the end of August (see chart below). 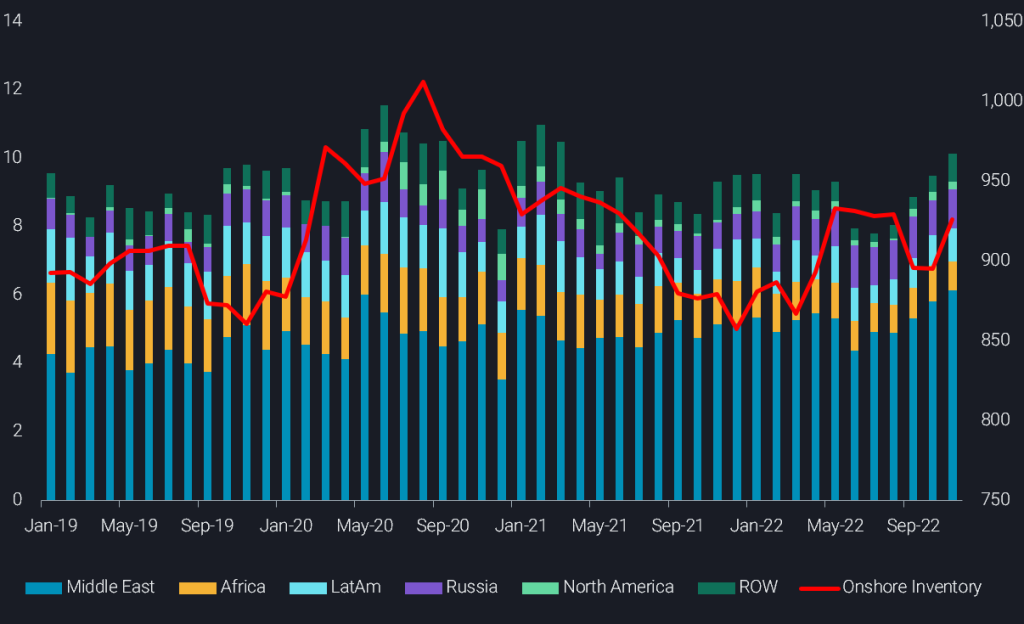 OPEC exports drop markedly, but this fails to support prices

OPEC (excl. Iran and Venezuela) loadings were down 1.1mbd in November. Most countries saw monthly declines, including the core producers in the Middle East as well as the North African member countries. Only Angola and Nigeria managed to increase their exports from very low levels. The primary reason for this is the Forcados terminal restarting at the end of October, having returned to its normal output of around 200kbd. But even with announced production cuts and actually falling exports, OPEC’s actions have failed to translate to an upside for crude prices, with Brent recently trading markedly below the $80/b level.

There are two reasons for this. On the one hand, the world economy and with it oil demand appears to be under severe pressure, as indicated by falling crude and product import levels in most markets over the last two months. Furthermore, the massive upside provided by China over recent months appears to be coming to an end, as indicated by collapsing VLCC freight rates and easing refinery margins.

Meanwhile, Atlantic Basin crude supply remains ample. Even though there has been a m-o-m drop in loadings of about 300kbd, average Oct/Nov liftings are up about 1.55mbd from year-ago levels. Kazakhstan and Norway added most supplies last month, while the US maintained exports at record levels.