In this insight we examine the diverging trends in the flows of Russia’s flagship crude grade Urals, when loaded in the Baltics versus Black Sea.

Much has been said about the emergence of a two-tier global crude market as Western buyers self-sanction Russian oil. But not all Russian crude oil shunned by Western buyers is flowing the same way. In this insight we explore the different dynamics behind the flow of Russian Urals crude, when loaded in the Baltics versus the Black Sea.

Russia’s flagship export crude grade is exported largely from the Baltic ports of Primorsk and Ust Luga, and to a lesser degree from the Black Sea port of Novorossisyk. Because of the larger proportion of Urals exported from the Baltic versus the Black Sea, the most dramtic changes for on-the-water volumes are being seen on the former. 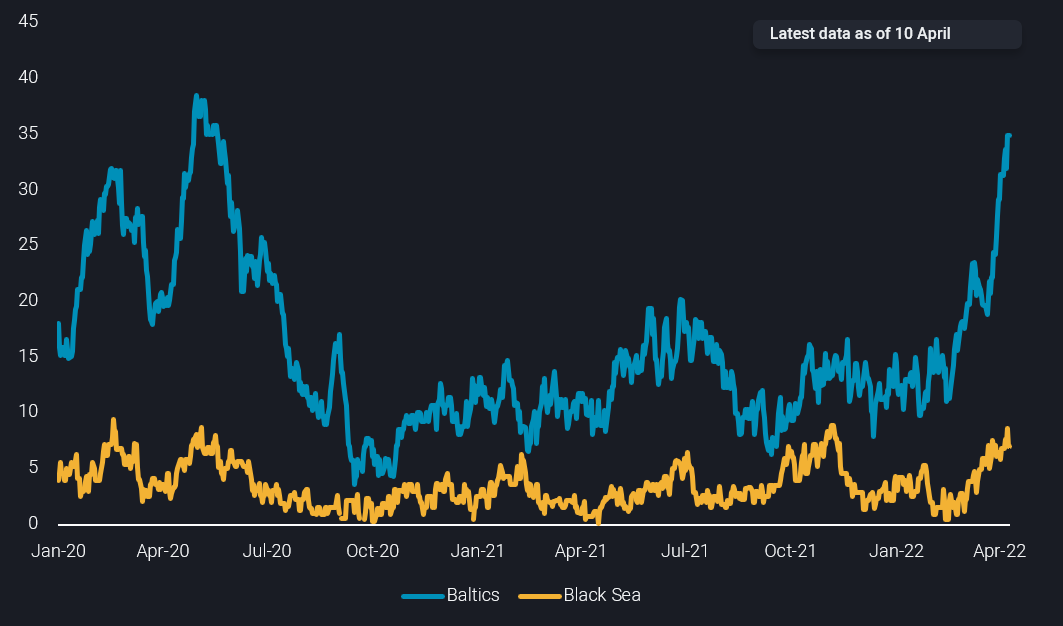 Rising on-the-water volumes for Baltic Urals are a function of relatively stable Urals exports (for now) along with very limited buying from the usual target market. This has increased the time spent for these cargoes on the water, either because they are sailing to further afield including in Asia or at least travel in that direction, awaiting orders as a deal is concluded.

Northwest European and Baltic refiners have sharply reduced Urals imports since the conflict in Ukraine. Total Urals arrivals into Northwest European and Baltic ports in March fell almost 460kbd m-o-m in March to around 620kbd. And this trend has been amplified in April with imports for the first 10 days of the month at only 370kbd. The decline would be even more dramatic were it not for rising imports by the Netherlands.

At the early stages of the Russia-Ukraine war, it was anticipated that cheap Urals crude would be scooped up from the Baltic region onto VLCCs for eventual discharge in China. However, this has not really materialised. Russian Baltic and Black Sea Urals departures to China were actually lower m-o-m in both February and March. China’s domestic demand is under threat from the impact of widespread lockdowns amid rising Covid-19 cases in the country and this has likely helped temper demand for spot purchases that would take more than seven weeks to arrive (Skaw to Ningbo).

India picks up Black Sea cargoes, and Baltic cargoes too

Meanwhile, an increasing amount of Urals from the Black Sea has been flowing to India – which represents a much shorter journey time than for Baltic flows to China.

India’s appetite for Urals has picked up in recent weeks, motivated by the deep discounts offered for prompt loading cargoes. Given that it only takes around 13 days for a Suezmax tanker to travel from Novorossiysk to West Coast India, Black Sea Urals also represent a relatively prompt supply for Indian refiners, i.e. faster than the delivery of crude from West Africa or PADD 3.

India received its first Urals cargoes of this year in March. Both cargoes were on Aframax tankers loading in the Black Sea. But since then, India’s Urals appetite has expanded to cargoes also from the Baltics. Total Urals departures to India (Baltic and Black Sea combined) since 1 March average about 500kbd, when including a number of cargoes that are so far signalling waypoints like Suez.

India’s rising appetite especially for Baltic Urals could be driven by the price dynamics which have made Urals from the Baltic much cheaper than Black Sea barrels. Price data from Argus Media puts Baltic Urals around $6-7/b cheaper than Black Sea Urals at latest reading (11 Apr), compared with a discount of less than $0.50/bl at the start of the year, and a $3/b discount at the start of the invasion (24 Feb).

Looking forwards, India is likely to continue importing both Black Sea and Baltic Urals, supported by the lack of competition from other buyers for these cargoes. But the main constraint in the short term is how much Russian Urals the Indian refining system can actually cope with, as not every cargo not purchased by Western or even Chinese buyers can be assumed to discharge in India. It will also be interesting to see whether opportunistic buying approach will run into any type of political limitations down the line.