China issued a third batch of crude import quotas last week, but limited quotas will keep crude imports subdued for the rest of the year.

China issued 4.4mn mt of crude import quotas to four independent refiners last week, down 84% compared to the same batch last year. The extra quotas were only granted to selected refiners in dire need of more crude import quotas, as the government continues to clamp down on excess refining capacity.

China’s crude imports marginally rebounded from July’s nadir, with seaborne imports at 9.2mn b/d for 1H August, albeit down 13% from a year ago. Refiners are reducing their refining runs as heavy rains in the central-east provinces and renewed travel restrictions due to the Delta variant spread dent domestic road fuel demand. Elevated crude prices, ample stocks and limited crude import and product export quotas have further curbed refiners’ buying interests.

Mideast Gulf crude arrivals into China have seen the largest increase this month to 5.4mn b/d in 1H August, up from 4.4mn b/d in July. Spot barrels from Angola, Brazil and Norway remained soft at 1.4mn b/d during this period, while Russian far east ESPO blend (seaborne) held steady at 660,000 b/d, despite its rising premiums against Brent. West African barrels may see a pick-up in October, as the spot grades favoured by independent refiners are currently offered at attractive discounts. The premiums of flagship Djeno crude (des Shandong) for October delivery has fallen to parity with Brent , from near $2/bl a month ago, according to Argus’ price assessments.

Meanwhile, Chinese independent refiners are ramping up their straight-run fuel oil imports to supplement their feedstocks amid limited import quotas. The current deep discounts of fuel oil to crude partly negates the fuel oil import taxes, to still offer positive margins to the refiners. The Shandong independent refiners imported a record of 45,000 b/d Russian M100 fuel oil in July, from 13,000 b/d in May and June and none before April. HSFO is expected to remain a favourable refining feedstock in the coming months. 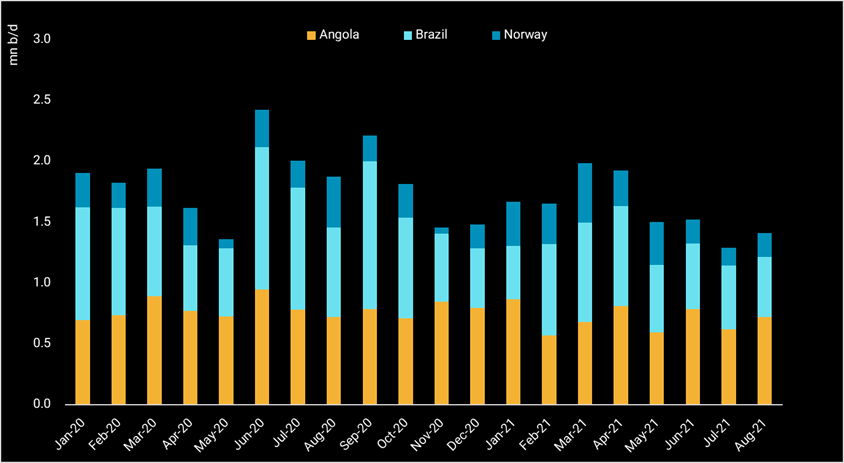 With domestic demand declining amid the heavy rains and renewed lockdowns, the surplus of clean products is set to grow, which would raise the country’s domestic inventories and push up exports this month. Some additional exports are enabled by the second batch of product export quotas recently issued to state-owned refiners. But the upside is expected to be moderated given the steep overall reduction in quotas.

China exported 196,000 b/d of gasoline/blending components in 1H August, compared to July’s year-to-date low at 91,000 b/d, as travel restrictions largely depressed gasoline consumption. Diesel/gasoil exports in the first half of this month remained around July’s 12-month low of 174,000 b/d, while jet/kero exports fell to 60,000 b/d, compared to 123,000 b/d in July. Higher exports last month were driven by the newly levied value-added tax on jet fuel that is not sold to aviation firms, limiting domestic outlets. Going forward, this is likely to be counterbalanced with refiners increasing diesel output over jet/kero. 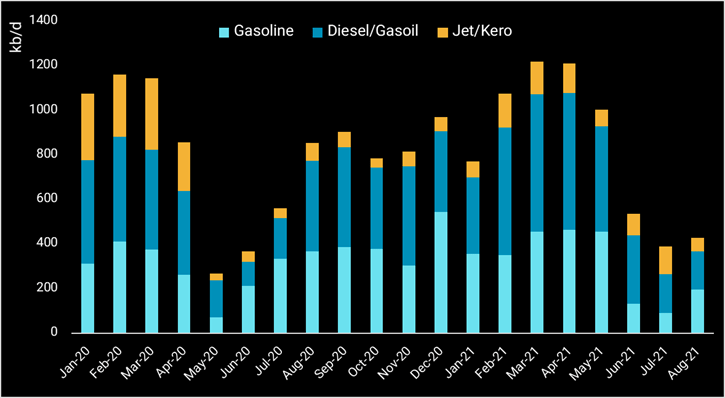