Seaborne crude oil supplies made a step higher in October and early November, as core OPEC+ suppliers hike exports. But this is not necessarily bearish as it exposes a lack of spare capacity.

OPEC+ countries’ seaborne exports for October and the first half of November have seen a clear increase. Amid other factors, this has helped pause the oil price rally over the last couple of weeks. But the flip side of OPEC+ production increases is always a mirroring decline in spare capacity. A look at the details suggests that there is much less spare capacity in the market than most players think. 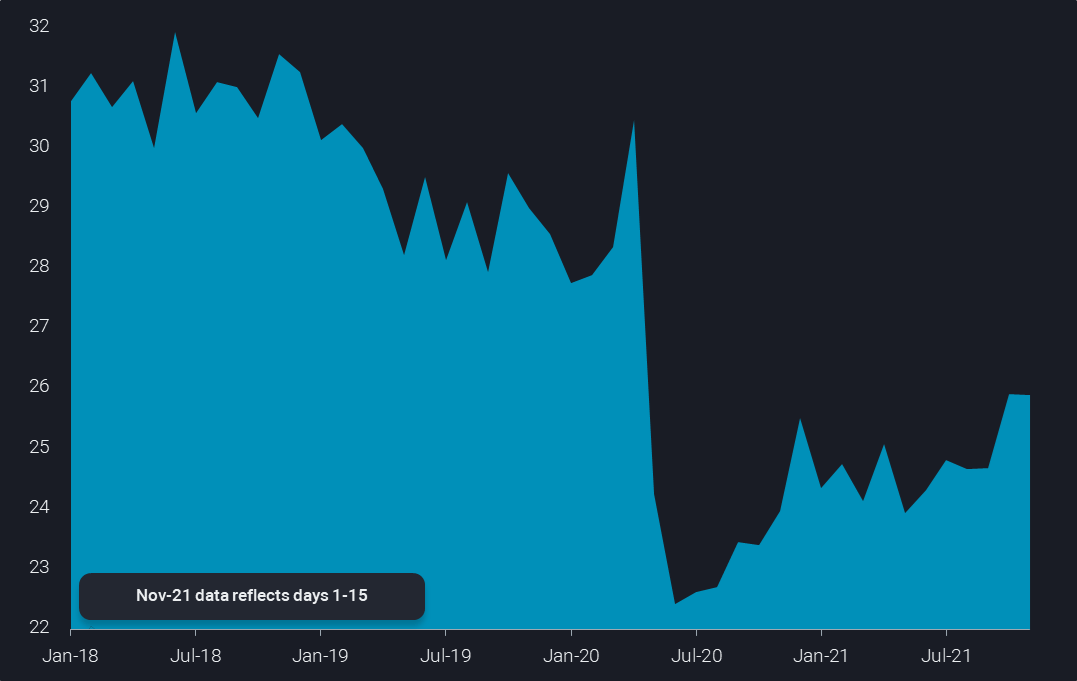 Over recent months we have written frequently about the strong divergence between crude export paths of individual OPEC+ countries. The group as a whole has actually only raised exports significantly as of October, making a 1.2mbd step higher to 25.9mbd.

Saudi Arabia and the United Arab Emirates increased their external supplies three months earlier as of July, and are now up by more than 2mbd from the average H1 2021 level. But their supply additions were eaten up by disappointing export levels elsewhere, including at that point of time Russia. However since then, the big OPEC+ partner has together with its neighbours Azerbaijan and Kazakhstan hiked seaborne exports in October to a post-Covid high of 5.1mbd. Other countries have not really contributed much in the form of increases, but rather experienced a stagnation or further declines in production and exports. 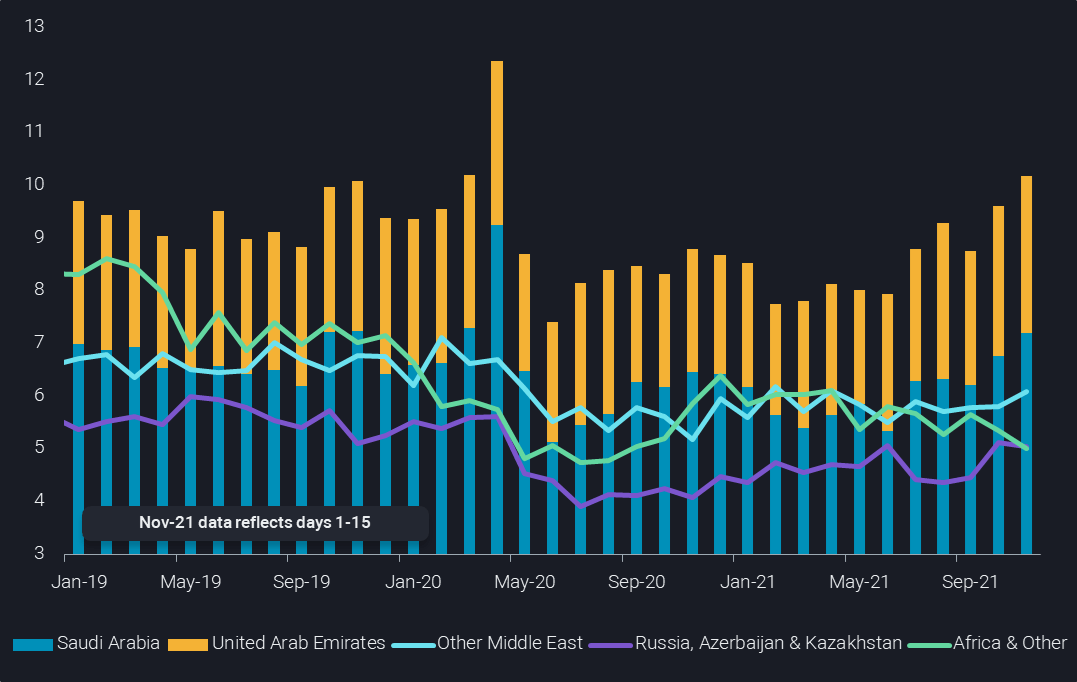 Comparing the exports over October and H1 November to the average 2019 level, shows that Saudi Arabia and the UAE are already exporting 0.5mbd more than the pre-Covid, pre-cut level. And these two countries are the only ones in the entire OPEC+ group, which can make this claim. Other Middle Eastern and the Caspian countries are sending a combined 1.2mbd or about 10% less crude to global markets than in 2019. All other countries are exporting a combined 2.6mbd or one third less than just two years ago – a dramatic decline. 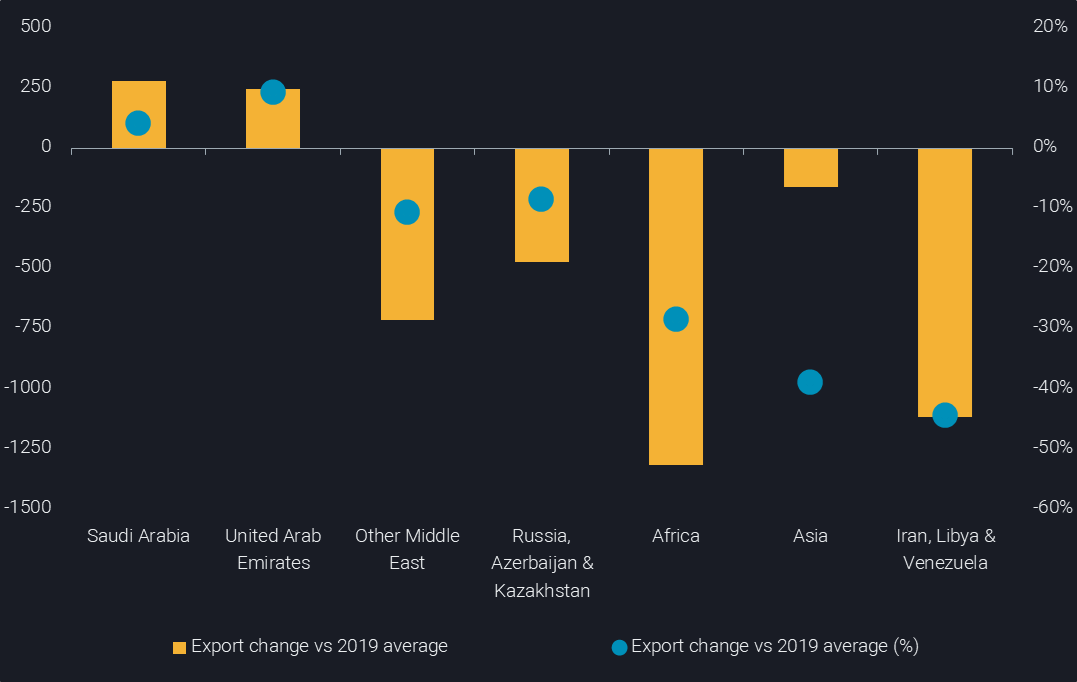 How likely is it that individual OPEC+ countries hold spare capacity? According to Argus Media data, all Middle Eastern countries have been producing below their allowance in October. What would hold countries like Iraq and Kuwait back from producing more in the current market environment, where all major consuming markets cry for more oil, and any government in the world would appreciate additional income?

I would argue that apart from Saudi Arabia and the UAE only Russia is a candidate for spare capacity. But the Russian energy minister has recently stated that 2019 production levels will only be reached again in 2023/2024 (Argus Media), axing any hopes for relevant volumes from that player. Meanwhile, the Saudi oil minister has warned about the lack of global spare capacity, while stating that the 1mbd extra raising capacity in Saudi Arabia to 13mbd will only be reached in 2027 (Reuters).

According to the EIA, global spare capacity in October was 6.2mbd, while according to the Saudi oil minister it is 3-4mbd. I would argue we have at best 3mbd, up to 2mbd in Saudi Arabia and less than 1mbd in Russia and the UAE combined. If demand were really to reach 2019 levels soon and declines at many producers continue at recent rates, most of that cushion could be used up within the next 12 months.

Each week, Vortexa Market Analysts produce exclusive reports highlighting product flows in Asia, Europe, and Americas. Receive these directly to your inbox, and see how effective data using Vortexa Analytics can be. Sign up here!