As the world adjusts to new trade flows of Russian crude oil, we at Vortexa see an increase in ship-to-ship transfer activity (STS), at previously uncommon locations. This insight explores the reasons behind this shift in Urals flows, the final destination of the cargoes and the profile of tankers involved in STS activity.

Offshore Ceuta (Spain) and Kalamata (Greece) are emerging as key hubs for STS transfers of Russian Urals, involving 9% and 11% of Russian Urals exports in December, respectively. This contrasts with other STS locations, which accounted for only 3% of December exports. This reflects the change in sentiment towards Urals STS activity in certain locations pre-war vs post-war and the new routes which have arisen to East of Suez.

Post-war, the North Atlantic coast (close to Azores) was initially a key location for Urals STS activity, accounting for 60% of the STS activity of Russian Urals from May 2022 to August 2022. The VLCCs that loaded Urals during this period later discharged in China and then ballasted back to the Atlantic in Q4 2022 for a second round of transfers. But high tides in the Atlantic make it unfeasible to conduct STS operations in the same locations as before. 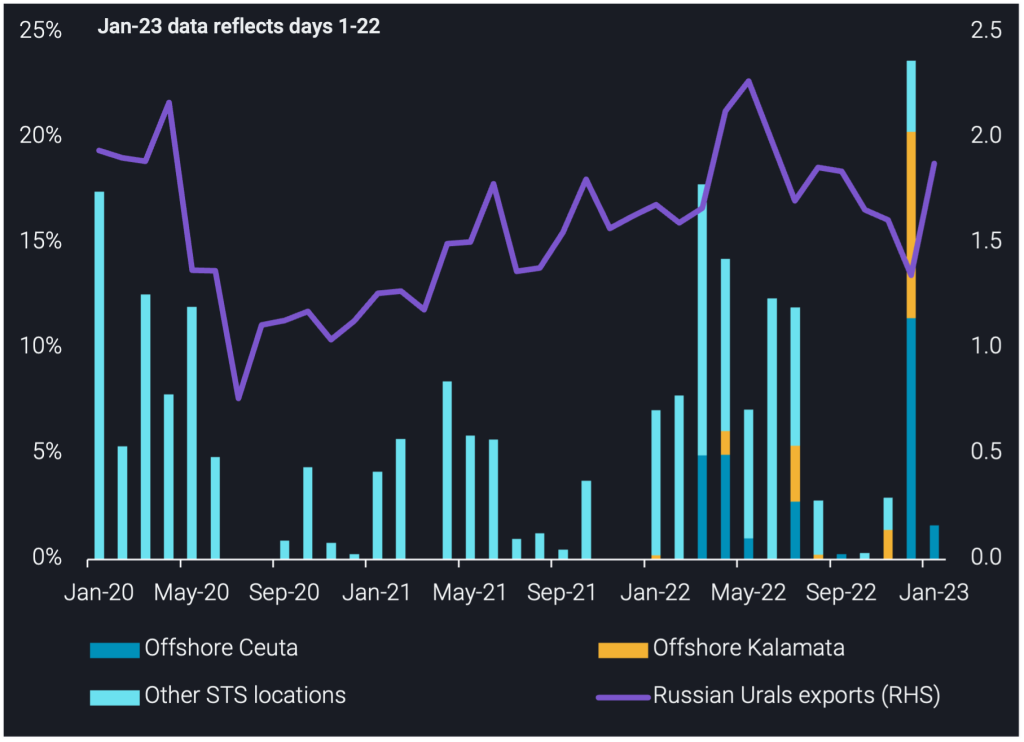 Urals via STS destined for China and India

Every Urals cargo loaded from Russia in December that went on to STS via Kalamata was ultimately discharged in India. The choice of India as a destination for cargoes via Kalamata STS makes sense given the Suez Canal is close – so easily accessible for tankers to sail towards India.

Meanwhile, Urals loadings in December that went on to STS via offshore Ceuta had a mixture of both China and India as final destinations. Offshore Ceuta is situated near the Strait of Gibraltar, making it a prime location for Urals feeders (typically Aframax tankers) utilising the shorter voyage between the Baltics and Ceuta as opposed to sailing directly East of Suez.

However, unlike offshore Kalamata, there are VLCCs sitting offshore Ceuta, that have the option of two routes to East of Suez:

Since December, six VLCCs have sailed to offshore Ceuta. Three are awaiting Urals feeders and three have departed after loading Urals via STS. The three VLCCs last seen offshore Ceuta are all Chinese operated, the average age is 17 years and two participated in the North Atlantic dark STS activity in 2022. Of these three, one tanker previously carried Venezuelan crude.

VLCCs are awaiting offshore Ceuta, rather than the North Atlantic because the peninsula offshore Ceuta provides protection from prevailing Atlantic wind and swell that comes in the Mediterranean but also provides proximity to the Atlantic for voyages to China via the Cape of Good Hope.

A crucial phenomenon observed in 2022 was the switch made by tankers from already sanctioned trade (Iran and Venezuela) to Russian trade. Of the twelve tankers that conducted STS transfers offshore Ceuta, seven have been observed carrying Iranian and/or Venezuelan crude before. In contrast, zero tankers conducting STS transfers offshore Kalamata have previously carried any sanctioned crude. This hints at tankers offshore Ceuta to be of a higher risk profile. 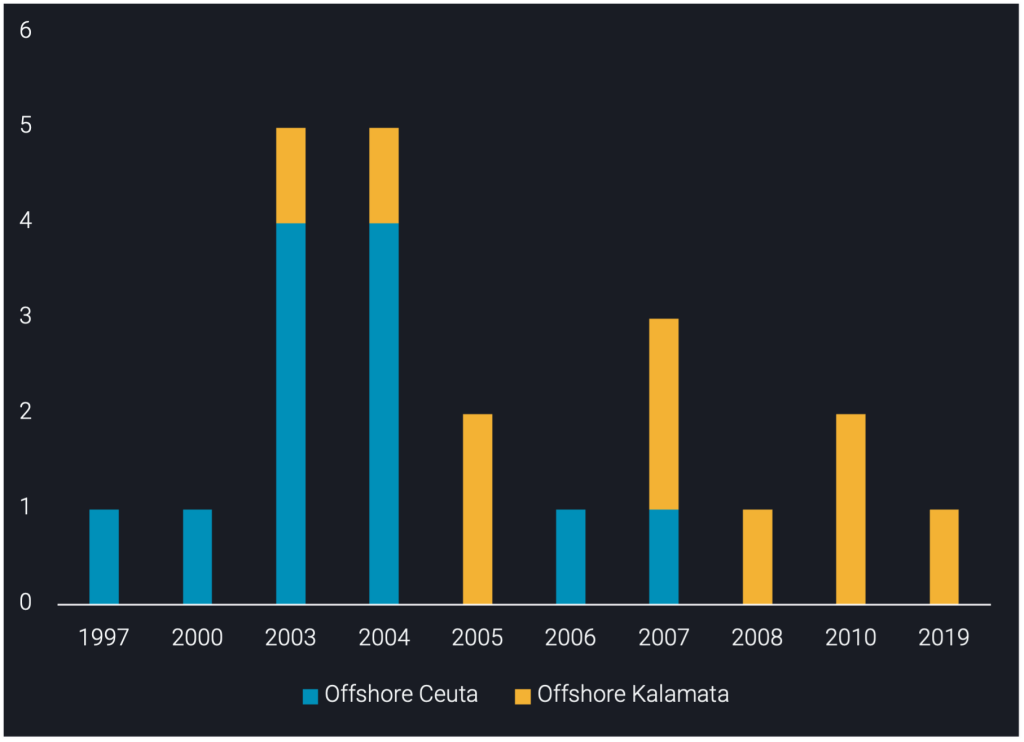 Looking ahead, we expect rising STS activity offshore Ceuta (versus 2022 levels) as other VLCCs join those currently loading Urals for China, to support or even build on current levels for Russian Urals exports to China. The STS transfers to VLCCs allow for better economies of scale (lower costs) and advert an overheating of the feeding Aframax and Suezmaxes classes. The potential increase in Chinese-operated VLCCs (engaged in Urals STS transfers) would likely boost the number of high-risk tankers congregating offshore Ceuta in the coming months.

But looking further ahead into the summer, once tides subside there could be a reversion back to dark STS activity off the North Atlantic. This would likely raise the complexity of tracking Russian Urals flows, as was the case in the summer of 2022.