The rise in rates is evident across all segments and routes in the East of Suez. LR1 and LR2 Middle East-to-East Asia rates have more than doubled according to our freight screen, while similarly MR rates from Southeast Asia-to-Far East have risen by 80% to Argus Media price assessments.  To understand the reasons behind this behaviour, attention must be given on both sides of the freight fundamentals: demand and supply.

Looking at the former, global utilisation for tankers carrying clean products (excluding LPG) is on an upwards trend reaching a 12-month high. This underlines the reality that currently product demand continues strong amidst low levels of CPP stocks globally. It is not only that  Europe continues its buying of diesel from Russia with a reshuffled, more concentrated offtaker portfolio, while sourcing also products from afar. It is also the diesel appetite of Latin America and the US gasoline demand ahead of the summer driving season that propelled a rise in flows. At the same time, the logistical issues with regards to the Russian – Ukrainian conflict created confusion amongst operators, adding fuel to the fire as delays in schedules led to a rise in cargoes on water, thus minimising the available fleet for hire. 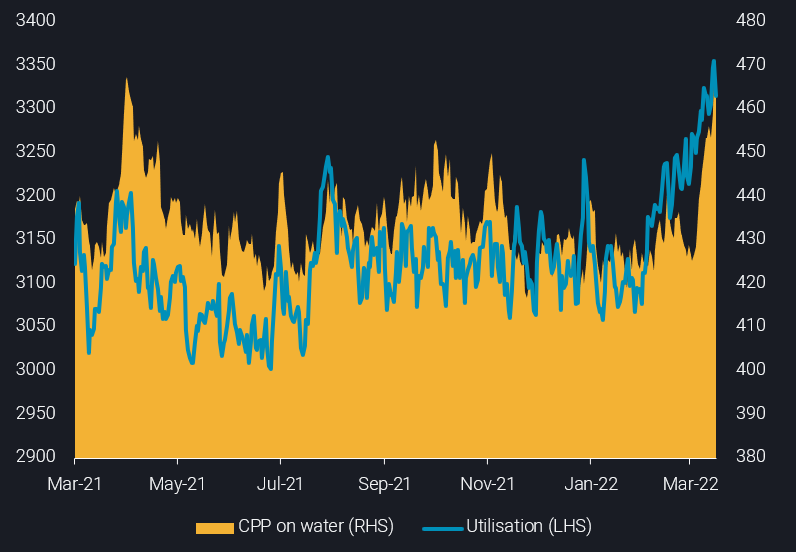 This ubiquitous boost in product demand however only tells half of the story regarding the freight rate rally. The fleet repositioning pattern that has taken place in the East of Suez has played a significant role in the freight rate trajectory of the region.

Over the course of 2022, an increasing portion of the MR fleet has repositioned from the East to the West of Suez. This has started from well before the conflict and has mainly to do with the strong performance of gasoline and diesel early in the year and good chances for much higher US refining activity this year in order to satisfy strong product demand in the Americas and potentially also Europe. Unsurprisingly this development has left the East of Suez undersupplied in number of vessels. At the same time, LR1 and LR2 availability out of the MEG has declined on the back of a rebound of naphtha loadings towards the East as well as due to the increase of Indian diesel flows towards Europe. 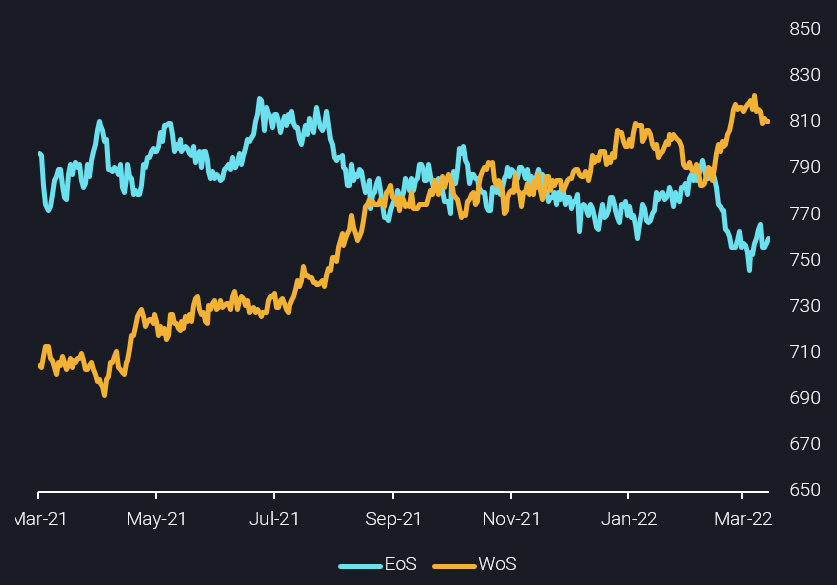 MR tankers located in the East of Suez vs. West of Suez (no. of vessels)

Looking ahead the outlook seems divergent between the MR and LR vessel classes. Although Europe continues to buy Russian diesel the region will continue to hedge its reliance by looking for cargoes not only from India, but from the Middle East as well. Flows to Europe from the latter region were limited in Q1 2022, as refineries in the Middle East were undergoing a heavy maintenance schedule. This is likely to change during next month as refineries come back online. Diesel flows to Europe are predominantly utilising LR1 and LR2 tankers thus this development is poised to further support rates for these segments.

In the chart above, it can be observed that MR tankers are gradually trying to reposition back towards the East of Suez. However it is for now doubtful whether this increase in tonnage will be matched with an additional boost in trade flows that primarily satisfy this segment. The MR fleet could potentially be absorbed by a rebound in China’s CPP exports. Various cities in China are entering lockdowns owing to Covid cases resurging, which could effectively lead to a decrease in CPP consumption, making the case of higher exports viable. However the current policy of the nation directs to a restocking of crude and CPP supplies instead, making the scenario rather unlikely to materialise – at least for now.