US crude exports to Europe rising and on larger tankers
Share

US crude/condensates exports to Europe are rising in April as the continent pivots further away from Russian supplies. As exports to Europe rise, so too are volumes loaded onto larger tankers, possibly indicating the start of a longer term trend.

US crude/condensates exports to Europe are rising in April as the continent pivots further away from Russian supplies. And the growing flows to Europe are being loaded onto larger tankers, likely reflecting a longer-term trend.

US crude exports to Europe stand at almost 1.5mbd so far this month, up by 200kbd from the March total. Departures along the route are currently at their highest for any month since March 2020. Rising US flows to Europe are underpinned by the desire from many European refiners to reduce exposure to Russian crude. European trading firms are also scaling down activity in Russian crude with numerous public statements made to stop trading Russian crude, in line with vague indications from European politicians.

In addition to the total flow volume rising, so too is the volume of cargo travelling on larger tankers. European buyers have historically received US crude/condensates cargoes on Aframax tankers, but the recent surge in demand is prompting flows via Suezmaxes and VLCCs. 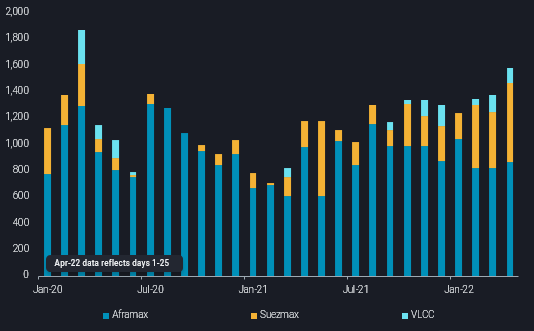 US crude/condensate exports to Europe by vessel class (mbd)

Total US crude/condensates to Europe carried via Suezmax and/or VLCC tankers reached 660kbd in April, the highest on record for Vortexa data. More than 90% of these cargoes in April have/are headed to either Netherlands, Spain, UK or Germany.

The uptick in larger US-origin cargoes will help save logistical costs in moving more crude into Europe, but it does then also naturally restrict discharge locations. So far in April, Suezmaxes have accounted for most of the increase in US crude exports to Europe,  but exports via VLCCs have also grown m-o-m. VLCC flows from the US to Europe are much less frequent than those on Aframaxes or Suezmaxes but in April two cargoes headed each to Rotterdam and Wilhelmshaven.

Another interesting US export this month is that of the Suezmax tanker ADVANTAGE SPRING, which has been reported (Bloomberg) as carrying crude lifted from the US SPR. The tanker loaded partly via berth in Beaumont and again via STS before discharging into Rotterdam.

The arrival of the ADVANTAGE SPRING could be a sign of things to come as the US SPR release takes effect. The US announced late last month it would draw down its SPR to the tune of around 1mbd from May onwards. As the release takes place, the market could see rising volumes of sweet US SPR crude head to the export market.

Though much of the releases expected in May will be of sour crudes, a significant 3.5mb of the 30mb expected to be released will be sweet. These sweet crude barrels could head to European refiners, who are facing a double whammy of rising desulphurisation costs – as European gas prices climb amid the conflict with Russia – and the impact of around 500kbd of Libyan (sweet) crude production capacity reportedly offline (Argus Media). The recent return to normal loading activity of CPC Blend loadings will provide some respite to European refiners, though.