West African crude exports to China continue to decline in May, following multi-year lows in April.

West African crude exports to China continue to decline in May, following multi-year lows in April. This is largely driven by faltering Chinese demand and discounted Russian crude. These West African barrels have however found some solace in Europe, the reasons behind which will be explored in this insight piece.

West African crude exports to China totalled an estimated 600kbd in H1 May, edging lower from record lows in April and continuing a 30% decline from March. This slowdown in exports is driven largely by reduced crude import appetite from Chinese refiners in lieu of weak domestic demand and a ramp up of seasonal maintenance this quarter. Being purchased on a spot basis, West African crude is typically seen as the marginal barrel for Chinese refiners, meaning flows are likely to decline quickly as refiners cut runs. This contrasts against Middle Eastern grades, which are typically sold on long-term contracts, guaranteeing a minimum off-take volume by Chinese refiners every month.

Additionally, the slowdown in Chinese refinery runs has also resulted in a rise in onshore crude inventories by nearly 10mb w-o-w as of May 12, 2022, continuing their ongoing stock build since late March 2022.

The decline in West African grades heading east is led by Angola, which accounts for 60% of all West African crude exports to China since 2019. Exports of Angolan grades, such as Cabinda, Mostarda and Pazflor, fell 200kbd m-o-m collectively, accounting for a large proportion of the decline in exports. Meanwhile, Angolan crude exports to Europe saw a significant increase in April, sitting at two-year highs at 320kbd. Demand for medium, middle-distillate-rich grades has been propelled in Europe by record premiums for diesel and widespread efforts especially in NW Europe to replace Russian Urals. This has made grades such as Cabinda, Clov and Dalia attractive. The current major destinations in Europe of Angolan crude include the Netherlands, Italy and France.

The increased European demand for Angolan grades is reflected in their premiums to North Sea Dated (Argus Media). Cabinda and Dalia were trading at a premium of $2.10/b and $0.95/b to North Sea Dated at the end of March 2022, respectively. This reflected the high European demand for these grades, though this has now softened given these grades are trading at discounts of $2/bl and $0.5/bl as of the 6th May, respectively. This coincides with apparently limited interest from both European and Asian buyers. 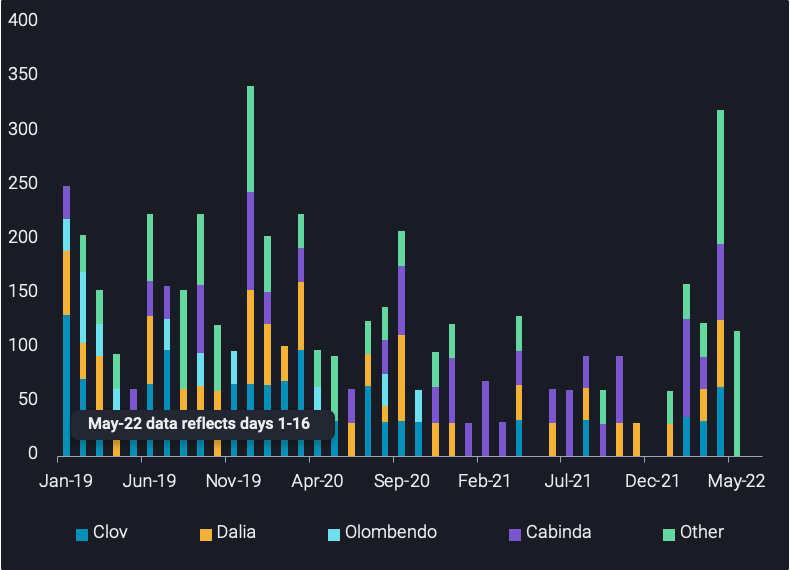 Looking ahead, it is possible that West African crude exports to China will increase over the coming months, as China targets for lockdowns to end, allowing in extension for crude purchases at more historically normal levels. The question then may be less about appetite for West African crude, but rather the ability for West African producers to keep up production. It remains a concern for the wider market that key regional producers such as Nigeria and Angola have regularly missed their OPEC production targets given under-investment in their oil fields. Nevertheless, European purchasing looks to be falling, suggesting a return to normality of West African grades heading East if and when Chinese lockdowns ease.