Rising interest rates, soaring inflation, and a slowing global economy have slammed the brakes on the world’s oil demand growth, in a sharp reversal from just a few months ago when the oil market experienced one of its tightest periods in history. Leading trade flows and price signals suggest that the demand slowdown could accelerate as we step into the new year.

Since their peaks in August, global crude prices have steadily cooled, accompanied by a narrowing market backwardation as growing oil supply narrowed the gap against falling demand. With crude liftings consistently surpassing refinery consumption over the past months, onshore crude inventories globally saw a 90mb (or 640kbd) build between August and mid-December. Interestingly, offshore crude floating storage inventories have declined by nearly 20mb within the past month, driven by the discharge of Iranian and Venezuelan crude into China, helping to free up sanctioned vessels for the Russian crude trade.

Dirty tanker rates, another indicator of forward crude demand, have seen a sharp downturn in the recent weeks, reflecting the sluggish demand outlook. TD3C Mideast Gulf to China VLCC tanker rates, for example, have slumped by over 35% between end November and mid-December. At a global level, VLCC utilisation has declined by 5% within this period, but is set to retreat further as price trends typically precede vessel utilisation. 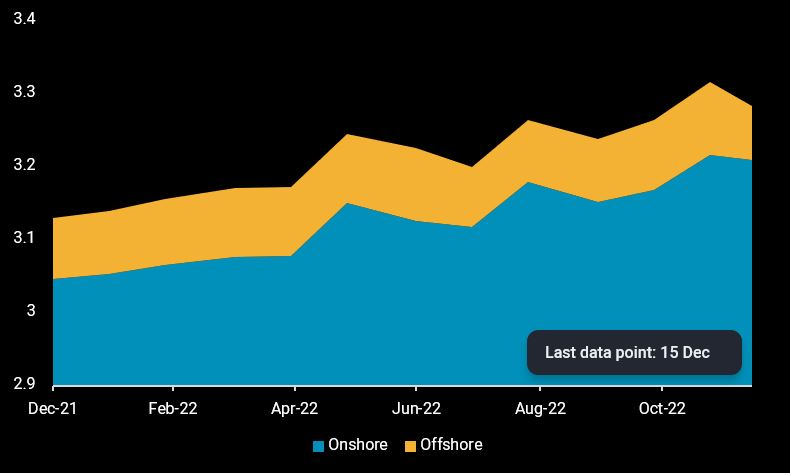 In the refined products market, ample gasoline and diesel supplies in the US Atlantic Coast and Europe respectively, coupled with hefty clean tanker rates, have shut export arbitrage to these markets. Middle East and Asia diesel exports to Europe fell to a four-month low of 610kbd in November and are on-track to decline further in December based on preliminary data. Europe’s gasoline exports to US Atlantic Coast in 1H December, meanwhile, is down over 40% m-o-m. Even South Korea’s jet fuel exports to the US West Coast, which rose to an eight-month high in November, has declined to 20kbd in the first two weeks of this month, hinting at a slowing demand outlook. 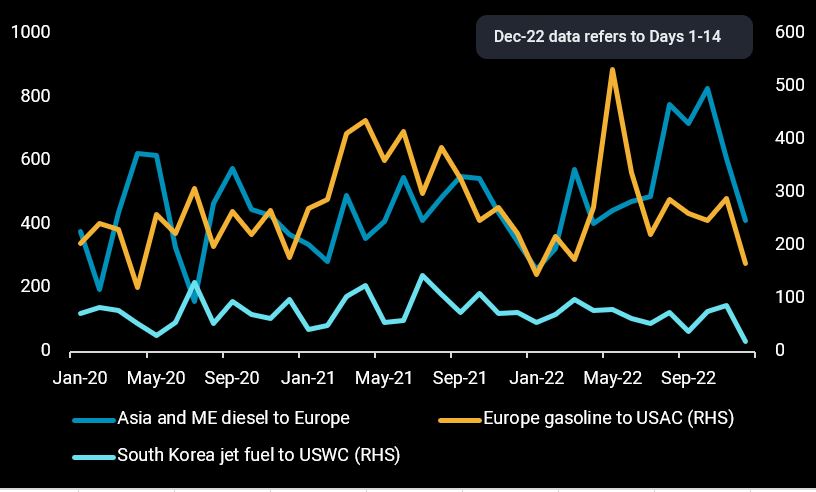 Is it all downhill from here?

Not really. The two wildcards that could cushion the demand and trade flows slowdown next year would be China’s re-opening and the EU ban on Russian oil imports. Europe is still importing 800kbd of Russian diesel today but would soon have to start sourcing longer-haul supplies to prepare for its eventual pivot from Russia. It remains unclear where Russian diesel will find its next home, and how much of it will be absorbed by alternative markets, which potentially means that the global diesel market could see some tightening, at least in the interim.

Meanwhile, China has committed to ending its Covid restrictions to reinvigorate its flailing economy but expect it to be a bumpy one. Its recent round of restrictions easing has led to a spike in Covid cases and caused widespread disruption to the country’s manufacturing activities and supply chain. As with other countries, it would take awhile for infection rates to peak and subside in China, which means that demand recovery may only come in the second half of next year.

Clean product imports from Australia, East and South Africa as well as Latin America have remained resilient so far. Whilst downside risks loom from slowing economic growth, these countries may even look to rebuild their product inventories next year for energy security if prices prove attractive.