China’s rebound in purchasing amid a much more ample global crude market lifts VLCC rates across all fronts, with much higher anticipated clean product exports from China, additional US SPR releases and imminent peak winter demand all pointing to a sustainable demand for crude tanker owners for the remainder of the year.

VLCC rates across the board, like the trademark routes TD3C, TD15 and TD22, managed to surpass the levels reached during Q2 2022 following the Russian invasion in Ukraine, moving recently to fresh 2.5-year highs.

The surge on rates is partially tied with China’s comeback in purchasing more crude after a very weak summer period (in terms of arrivals). Easing prices, in particular the sharp correction in the Brent/Dubai spread, lifted especially shipments from the Atlantic Basin during the past two months. 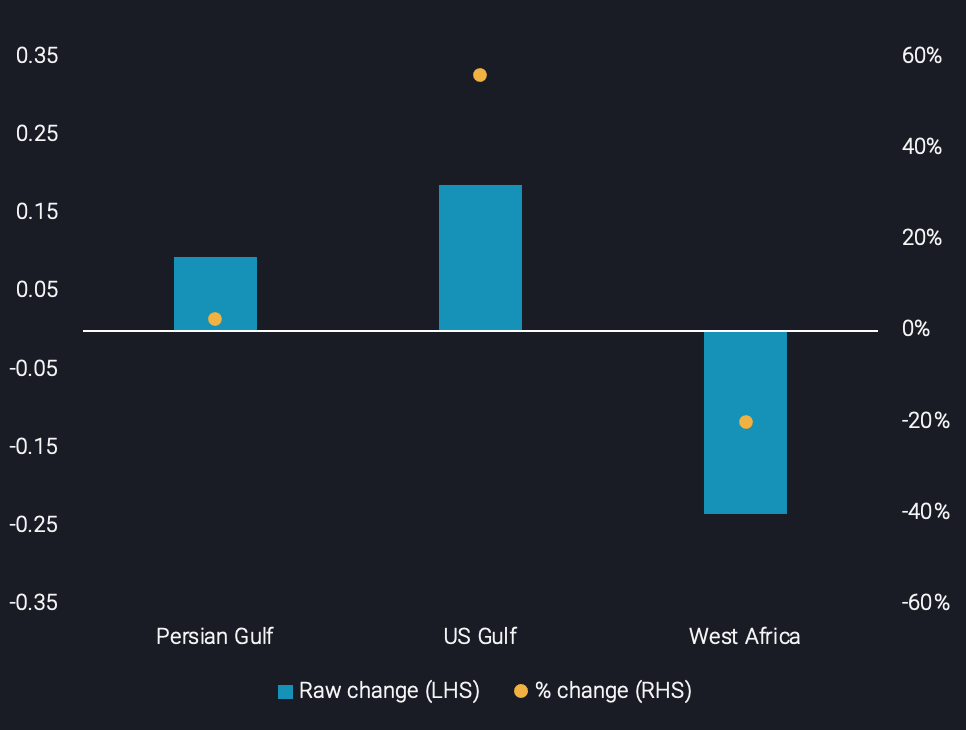 China’s exposure on US barrels has surged VLCC daily tonne-miles for the US Gulf-to-China route by 50%, when compared to the first 7 months of the year. Similarly VLCC employment has been supported marginally out of the Middle East, contributing an additional 100 million tonne-miles on the VLCC fleet on a daily basis.

In order to understand the redirection of US Gulf flows to China, the recent developments unfolding in Europe must be examined. Crude tanker utilisation for the US Gulf-to-Europe route is falling during recent weeks. This signals that European imports for US barrels in October might end up on a lower level on a m-o-m basis, in response to the autumn refinery maintenance schedule. But overall, the crude supply side is now simply much more ample than earlier in the year.

This is reflected in Northwest European imports in September, reflecting the solid availability and variability of inflows into the region. Middle Eastern flows into Europe are steadily rising, evidently as a direct quality-for-quality replacement of Russian crude. Similarly, African supplies are staging a strong comeback, partly a function of Libya resuming normal supplies, but probably also reflecting collapsing differentials of West Africa grades vs Brent.

Europe’s buying interest, steadily declining West African supplies, limited domestic demand and even cheaper crude from the US capped China’s buying interest and limited VLCC demand out of the region. This caused tonne-miles for the West Africa-to-China route to display a negative trend, as indicated by the graph. Nevertheless, when zooming to September, the decline in West African premia have triggered a rebound in VLCC West Africa-to-China tonne-miles, closer to yearly average values. This contributed positively to the overall VLCC tonne-mile demand which – similarly to rates – is currently hovering around a 2.5-year high.

Looking ahead, the recent announcements from the two strongest economies – US and China – paint a positive picture, not only for VLCCs but for crude tankers in general. Starting from the latter, China will likely issue a fifth batch of product export quotas amounting to as much as 15 million tonnes. In the current diesel-thirsty world, and with the prospect of Russian diesel volumes being removed from the market following the EU product and shipping insurance ban, this provides an excellent opportunity for China to place its barrels. This development will inevitably trigger a higher crude purchasing from refineries, thus continuing the recent tonne-mile trend, with VLCCs being the ultimate beneficiaries.

In a similar fashion, the US Department of Energy announced that it will offer an additional 10mb of SPR crude into the market in November. These supplies are poised towards Europe, as refineries will return from scheduled maintenance.This will come at a time where high refinery runs for diesel production will be key to satisfy heating as well as power generation demand into a challenging winter. This will likely cause a resurgence of USG-to-Europe flows towards the end of the year, providing support on smaller tankers such as Suezmax and Aframaxes, with VLCCs primarily heading to Asia.