After a period of prolonged strength in the Atlantic gasoline market, crack spreads subsided in November on the back of weakening demand fundamentals (seasonal, another Covid wave) as well as growing supplies. The recent cool-off in prices has had an impact on the freight universe, particularly for tankers operating in the region. More importantly, tonne-days for MRs carrying gasoline out of North West Europe remained suppressed during the month of November, forcing owners to look to PADD 3 for employment opportunities.

Subsequently, availability of MR tankers in PADD 3 gradually increased during the past two weeks. The longer tonnage list has provided greater flexibility for negotiation on the charterer side and as a result, MR rates for the USG to Europe route dropped by around 20% throughout this 2-week window, according to Argus price assessments.

On the other side of the Atlantic, MR rates for the Europe – Atlantic route picked up by 20% during the past week because of limited availability, as vessels had moved towards North America. However, the current spike in tonnage supply as shown in the chart below, signals a low probability of a further rise in rates. At the same time, refining economics currently clearly favour the US over Europe, potentially weighing on transatlantic gasoline shipments on MR vessels. 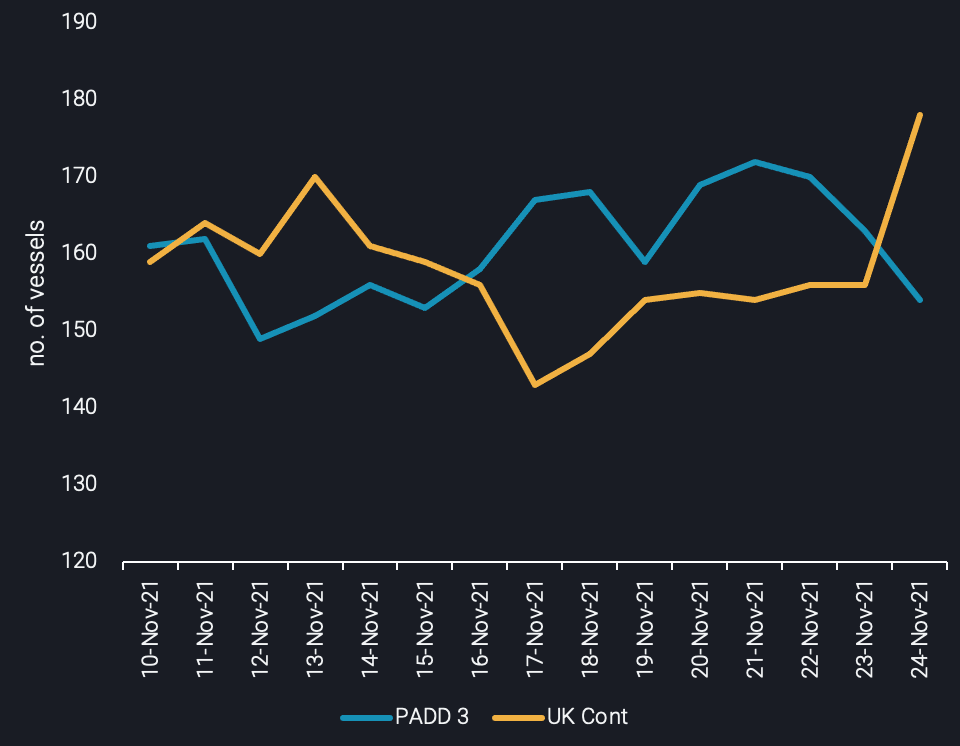 Potential MR availability in PADD 3 and UKC for a laycan window of 6-14 days (no. of vessels)

LR2s prevail against LR1s in the MEG

Looking at the larger classes however, a different story is unfolding. After a decline in October, naphtha flows out of the Middle East have rebounded considerably in the month of November, according to Vortexa preliminary data. This development has boosted LR2 tanker demand and thus rates for the ME – East Asia route have surged by almost 30% throughout November.

LR2s were employed at the cost of LR1 tankers as a more economical option for charterers. According to Argus Media the difference in freight rates between the two vessel types stood at around $7/t at the start of the month.  Evidently, this has been reflected in the tonne-mile share between the two vessel classes for naphtha cargoes out of the Middle East. As the graph below indicates, the current market share of LR1 vs LR2 tankers sits at a 22% to 78% split from a 50:50 situation in late October. 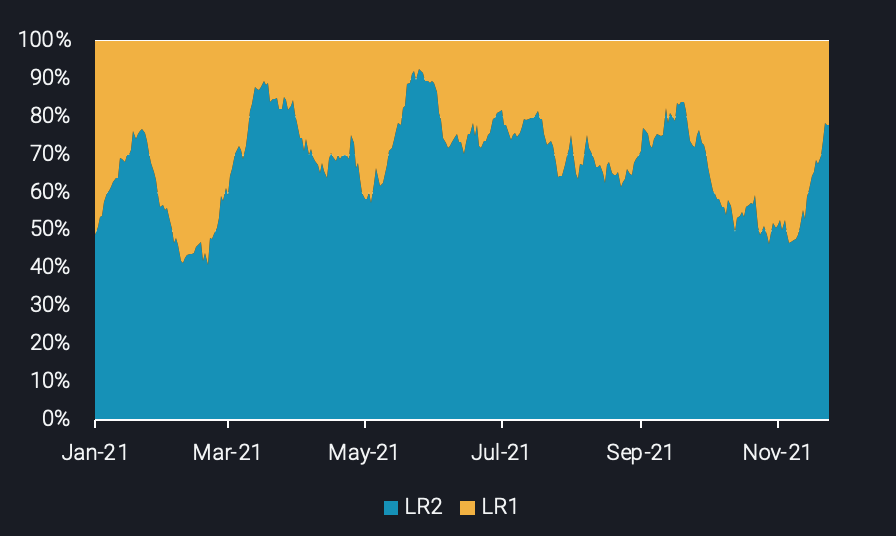 Eventually, the increased demand for LR2s left its mark on rate dynamics. The freight rate differential not only evaporated between the two vessel classes, but LR2s managed to surpass their LR1 counterparts. However, declining LR1 tonnage availability in the Middle Eastern region limits switching options to the smaller vessel class, as shipowners are positioning their LR1s to Europe to exploit better opportunities there.

LR1s find solace in Europe at the expense of MRs

Looking at the fleet distribution the number of LR1 ballasters towards Europe have risen since the start of the month, reflecting the rise for gasoline bookings towards West African countries. The rise in demand is stemming from tight gasoline supplies in the West African region. According to the Petroleum Products Pricing Regulatory Agency (PPPRA) of Nigeria, gasoline stocks stood at 1.14 mn tonnes on the 11th of November, a 2.5 year low.

As a result, LR1 UK Cont – West Africa freight rates have surged by 38% throughout November. On the other hand, this uptake in LR1 translates to the cannibalisation of the MR tanker class which compete on this route as well. This is also related with the economic advantages that LR1 tankers provide against MRs. At the start of November, LR1 tankers were at a $4/t discount. As the month progressed the spread even flipped temporarily, but for now the LR2s are approximately $2/t cheaper, according to Argus. 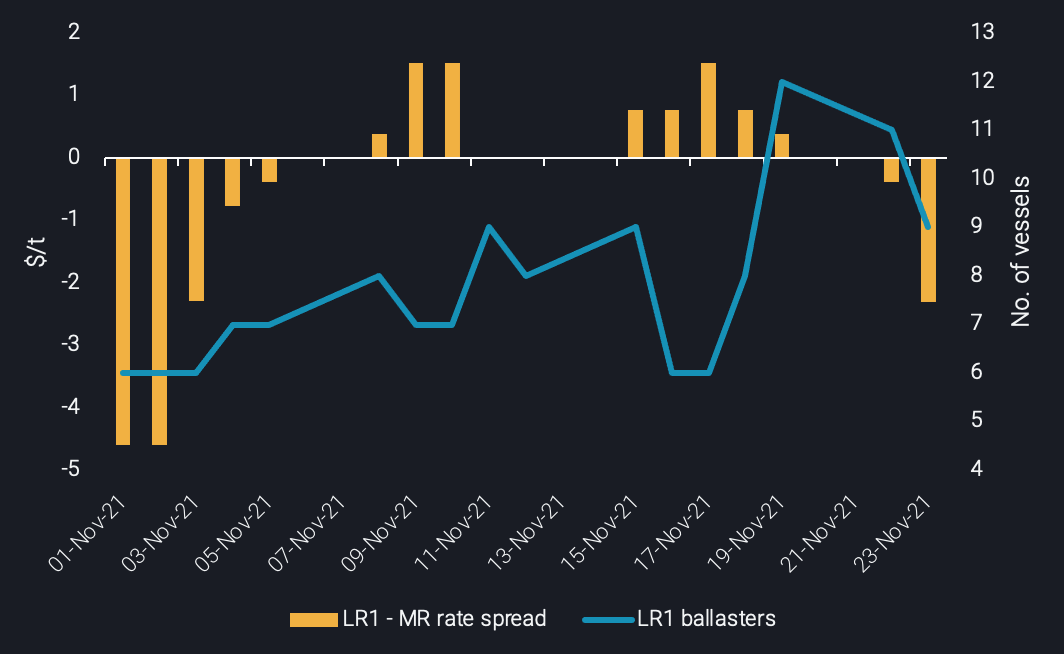 The economic rationale suggests that in the short-term, charterers will continue to favour LR1s for the Europe/West Africa route. However, increasing LR1 inquiries could lead to a considerable premium of LR1 rates which would in turn shift demand away from this vessel type while giving MRs in the Atlantic much needed breathing space, for the reasons explained above. If this is the case, LR1s will likely head towards the Middle East to compete with the currently more expensive LR2s for naphtha cargoes.