Clean tankers: LR2s in a position of strength as diesel market evolves
Share

Russia’s invasion of Ukraine has shifted diesel trade patterns and the clean tanker segment, but LR2s seem to be in a strong stance.

The Russian invasion of Ukraine is already having a profound effect on crude tanker markets, but this begs the question whether the reach of this event extends beyond the dirty tanker segment. As the world’s second largest diesel exporter, Russia is a key player in this market, therefore it is natural to explore any significant shifts in diesel trade patterns and their impact on CPP tanker demand.

Similar to the previous insight, we explore the key metrics which highlight to what extent the diesel tanker market has changed post-conflict (April to July 2022) compared to Q1 of 2022, and which other factors are contributing. We will begin with a global picture before drilling down into key trade routes and their roles going forward. 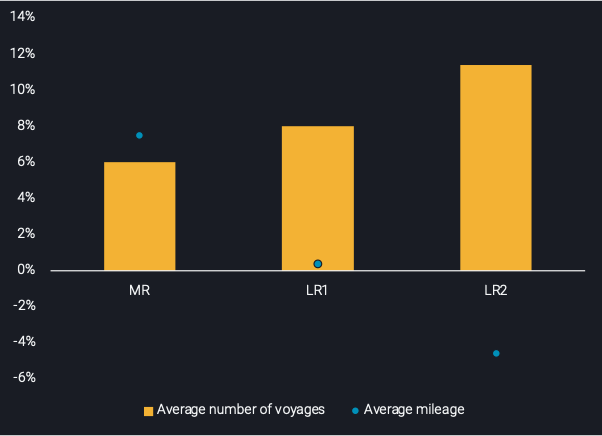 On the global stage, the three main tanker classes have all seen an increased number of diesel voyages per month post-conflict. LR2 tankers boast the largest percentage increase in diesel voyages (over 10%) whereas MR tankers have the largest absolute increase in voyages, seeing 56 more diesel voyages per month post-conflict. The tanker classes differed in average mileage figures, with MRs travelling further per voyage. LR1 mileage remained relatively unchanged and LR2s have been moving shorter distances, on average.

The global increase in diesel voyages post-conflict certainly points to higher diesel demand, especially given the consistent uptrend displayed by global diesel flows. This is likely to do with the ongoing recovery from the COVID-19 pandemic as well as with diesel’s broad potential as a replacement/back-up fuel in case of power shortages amid skyrocketing diesel cracks. The mileage figures give further insight into the effects of the conflict on trade routes used by clean tankers, most notably, the combination of a strong increase in LR2 voyages and a decline in mileage suggests a shift from conventional tanker behaviour. This is indeed the case as LR2s were seen cannibalising Pacific/Oceania MR routes. These are generally shorter-haul voyages which is almost certainly a cause of decreased average mileage by LR2 tankers post-conflict. For example, the East Asia to Southeast Asia route, perhaps one of the shortest voyages ever handled by LR2 tankers. 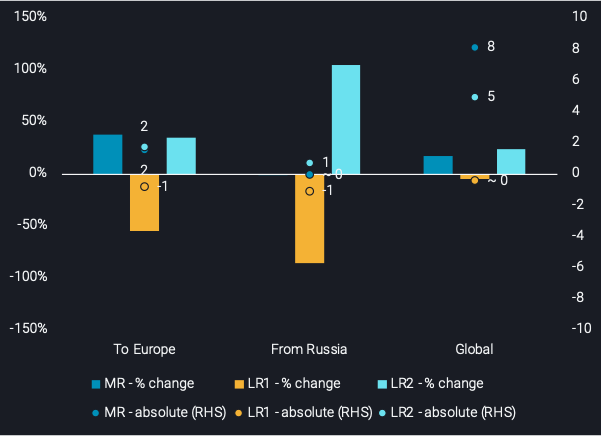 Focusing now on tonne-mile demand shifts, the MR tanker class has shown the second highest percentage increase in global diesel tonne-mileage post-conflict, with the largest absolute increase. From the chart above, we can see that tonne-miles out of Russia did not contribute to this change as they remained stable, which highlights Europe’s ongoing dependency on Russian diesel post-conflict. However, tonne-miles towards Europe contributed significantly to the change, mainly originating in the Persian Gulf as well as the US Gulf. The preference for these origins (prompted by the conflict, which caused Europe to seek alternatives to Russian supply) explains the increase in voyages as well as increased mileage, as these are medium-haul voyages for the MR tanker class. Additionally, the end of strict covid restrictions, increased demand for transportation and the previously high gasoline cracks and still relatively high diesel cracks all incentivized the CPP trade in both the Atlantic and Pacific Basin, particularly from the US Gulf to South America.

Turning our attention to the larger classes, LR2 tanker demand shifts were less obvious to deduce. At first glance, the chart above seems to suggest a large impact by flows out of Russia. Upon further examination, it is clear that the absolute change is actually lower than that for tonne-miles towards Europe, and only around a fifth of the global change. Diesel tonne-miles towards Europe once again contributed significantly to the increase above. As Europe diversified away from Russian barrels, LR2s were used to bring in diesel supplies from the Middle East and India, however, India reduced their contributions in the latter half of the post-conflict period as domestic demand began to rise.

Lastly, LR1 tanker diesel tonne-miles were relatively unaffected post-conflict, with slightly less activity towards Europe and from Russia being offset by increased activity from the US Gulf to South America and out of India to Australia and West Africa (while domestic demand was low).

Clearly, MR and LR2 tankers showed the most change, not only in their diesel tonne-mileage, but also in their behaviour. MR tankers developed a taste for medium-length routes while also increasing activity on some traditional routes, and LR2s cannibalised short-haul routes and found healthy levels of employment on longer routes as well. LR1 tankers seemed to offset changes caused by the conflict by simply increasing activity on a selection of traditional routes, not straying too far from their usual activity – this tanker class is less frequently used for diesel transportation anyway. Evidently the adaptive nature of the MR and LR2 tankers has seen them perform better in the diesel market post-conflict than LR1s, who adjusted activity levels on their usual routes but did not venture out to new routes.

In the coming months, more change is on the cards for these tanker classes. With the EU ban of Russian oil products set to take effect in early 2023, longer-haul routes could emerge from Russia to South America and/or West Africa, as well as more flows from India/Middle East to Europe. This should free up space on Pacific MR routes and give back some market share to MR tankers as LR2s move onto these longer employment opportunities, followed by LR1s. Naturally, LR2s are likely to prevail against LR1s on these new longer routes as LR1 newbuilds are currently nonexistent, not to mention the slightly larger size of LR2 tankers.

This outcome is of course dependent on whether bullish or bearish factors prevail in the diesel market. With serious concerns about the structural downside for diesel demand as imports (though rising) still remain below pre-pandemic averages as outlined in this insight blog. Additionally, the coming winter season will also play a role, as a cold winter could cause an increase in consumption which could contribute to higher earnings for clean tankers. Alternatively, warmer weather might decrease demand, and see clean tankers move to other product markets instead, the resulting deadweight tonnage supply increase in those markets could then see earnings fall.

In the case that diesel demand slumps, LR2s may continue their cannibalisation of MR routes and outcompete the smaller tanker class. If diesel demand booms and alternative imports into Europe are needed, LR2s will likely capitalise on new longer-haul routes, and MRs may enjoy having some of their Pacific market share back, increased activity out of the Atlantic Basin towards Europe and even some share of the new longer-haul routes if the East-to-West arb opens wide enough. Either way, LR2 tankers are seemingly in the strongest position going forward, and may be relatively better off than their smaller counterparts for the next few quarters.

Dylan is one of Vortexa's freight analysts, tracking freight developments and interpreting them through our freight newsletter and insights. Dylan also contributes to our market briefings, his current focus here is on the Asian freight market.