Russian-Ukranian conflict managed to shift the crude tanker trade patterns, however Chinese purchasing activity is and will remain a barometer for tanker recovery.

Six months have passed since the invasion of Russia in Ukraine, which caught most of the world and in consequence – shipping markets – by surprise. At the onset of the invasion, diverging opinions came into the spotlight regarding the overall impact that the conflict would have on the crude tanker markets.

In this insight we will attempt to assess the changes in crude tanker demand prior to and after the invasion on the most-affected trade routes, but also on the global shipping stage. Through this, we will try to understand whether the current volatility in the market relies solely upon the developments revolving around the Russian-EU relationship or whether there are other key factors at play. 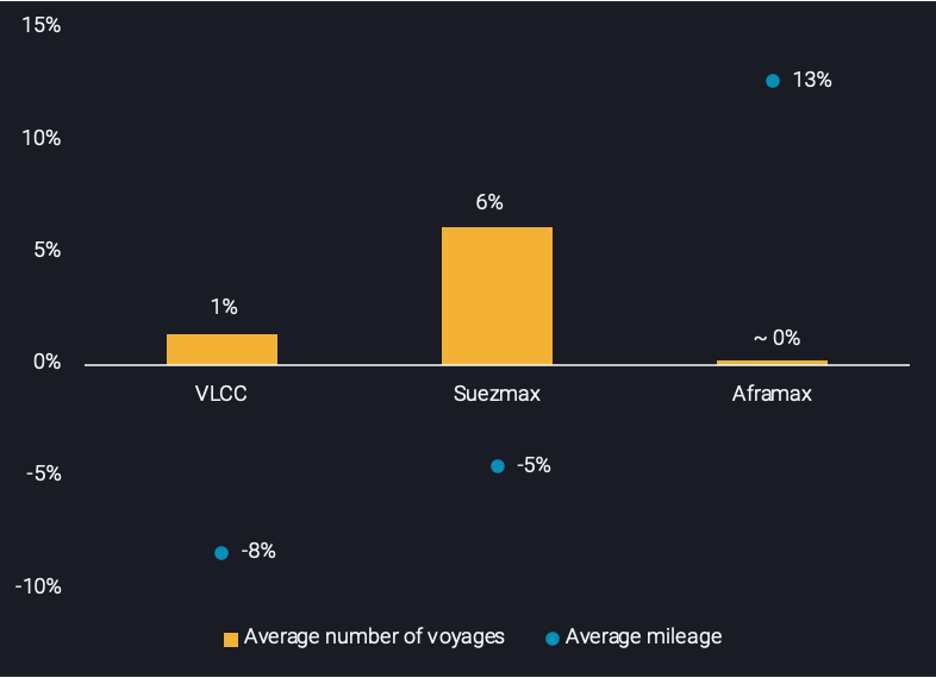 Globally, since the start of the Russia-Ukraine conflict, all main three dirty classes have seen some increase in the average number of voyages per month compared to Q1 2022 (pre-conflict). Suezmaxes showed the largest increase while Aframax and VLCC voyage numbers remained practically unchanged. Contrary to the trend observed in the number of voyages, the average voyage mileage declined for VLCCs and Suezmaxes, with Aframaxes being the only tanker class of the three to travel considerably further post-conflict.

Although the rise in voyages is marginal – apart from Suezmaxes – it reflects the gradual demand recovery from the COVID-19 pandemic. High product cracks in regions with no domestic crude production like Europe, incentivized higher crude flows. Similarly, the emergence of shorter-haul routes reduced the turnaround time for loadings. Drilling down to tonne-mile changes on relevant trade-routes, we can see clearer the impact of the Russian-Ukrainian conflict on vessel demand for each tanker class. 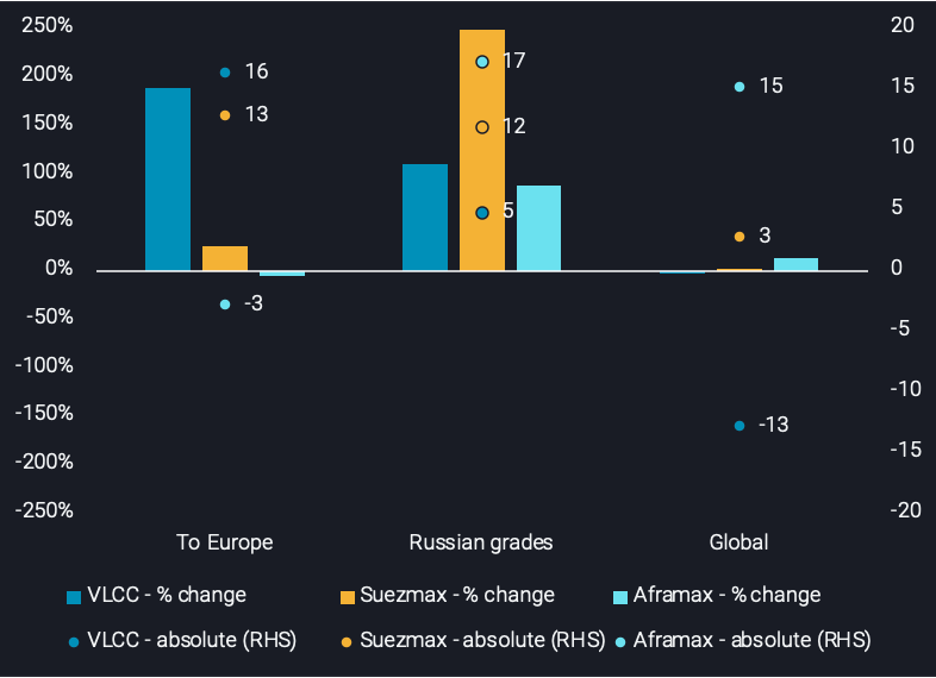 Starting with VLCCs, we again observe a minimal change in global tonne-miles, but a definite shift in trade patterns. In the chart above we notice a strong increase in VLCC tonne-miles towards Europe, this can mostly be attributed to increased intra-flows in the Atlantic Basin, mainly from the US Gulf and partly related to the SPR release. Additionally, more VLCC tonne-miles stemmed from carrying Russian grades, which were destined to India and China. Nevertheless, the growing intra-Atlantic Basin flows, including cannibalisation of other routes by VLCCs (such as Brazil-to-Europe) involved shorter-haul voyages compared to voyages towards China, which ultimately decreased the average mileage of VLCCs despite increased activity.

Moving on to Suezmax tankers, it is clear that much of their activity is pointed towards carrying Russian grades, while a smaller part of the increase also stemmed from carrying crude from the US Gulf to Europe. Russian grades were increasingly carried from the Black Sea/Baltic to India. In addition, Suezmaxes also penetrated some unconventional routes such as Russia Far East-to-China (TD24) and increased activity by 20% on the Middle East-to-Mediterranean (TD23) route post-conflict. This increase in shorter-haul activity decreased average Suezmax mileage in a similar way to VLCCs.

Of the three tanker classes, Aframaxes showed the largest increase in global tonne-miles after the invasion. This is unsurprising as they experienced increased voyage numbers, but more importantly, much higher mileage per voyage. While maintaining tonne-mileage on the US Gulf-to-Europe (TD25) route, Aframaxes also capitalised on the sustained activity on the Baltic-to-India route, starting in April. Aframaxes found shelter in longer-haul voyages following a 15% demand decrease on the very short-haul cross-Mediterranean trade route, which overall  resulted in increased average mileage per voyage.

Overall, VLCC and Suezmax show shifts in trading patterns due to the conflict. However, the global tonne-mile demand remains unchanged for these vessel classes, highlighting that the subdued Chinese import activity is equally a significant factor. In contrast, for Aframaxes, the Russian invasion pushed this segment into new markets, triggering the combination of a boost in voyages and mileage per trip which ultimately resulted in increased tonne-mile demand.

Come December 5th 2022, the EU ban on seaborne Russian crude oil will have taken effect, eliminating all arrivals except for Bulgaria. This effectively means that around 1.1mbd of Russian crude (700 kbd of seaborne and 400 kbd Druzhba pipeline) will need to find alternative outlets, as detailed in this insight blog.  As things stand currently, there are likely two suitors that are willing to take up these barrels: China and India, with the rest of the third-party countries keeping a distant stance. This scarcity of buyers will make it challenging for Russia to maintain its current production levels. Nevertheless, the wait-and-see approach that is currently observed by Chinese state-run refineries on Russian barrel procurement might well change going forward. Chinese buying is particularly sensitive to outright prices and the anticipated heavy discounts on Russian crude and the likely pickup in flows to China will likely replace the current appetite observed for Atlantic Basin crude (mainly from the Americas).

In contrast, Europe has a multitude of sources to replace its Russian dependency. The sources that can satisfy the region’s demand range from short proximity regions like Caspian, North Africa and the North Sea to medium proximity regions like North and South America, the Middle East and West Africa. A higher exposure on the former regions is poised to favour Aframax demand while a higher exposure on the latter will likely shift the balance towards Suezmax tankers. Yet for either of these scenarios to come true, a higher cargo pull from China is required to divert VLCCs away from employment in European destinations. This could be the case, as current import levels in China continue to be subdued and regardless of the impact of any fiscal stimulus they seem unsustainably low at these levels.

Overall, there are mixed signals for the development of tonne-mileage going forward. There is an upside on long-haul opportunities on VLCCs carrying marginal barrels from the Atlantic Basin to the East, which will leave more breathing space on Aframax and Suezmax tankers destined to Europe. It should be stressed out for one last time though, that this upside on VLCC tonne-miles is mainly dependent on China’s buying behaviour. The prospective Russia-to-China flows might occur to some extent on dark voyages or via sanctioned vessels, limiting the employment upside for the majority of the fleet and hence support for freight rates.