As summer approaches, VLCC and Suezmax rates still remain in the doldrums. Utilisation for these two tanker classes remains steady since the start of the year, hovering at around 600 tankers per day. However, this does not give the full picture of the tanker landscape.

On the one hand, tonne-days for VLCC and Suezmax tankers are decreasing throughout the year. On the other, the average distance travelled by these tankers has been on an upward trajectory since mid-April, resulting in stable utilisation. We will now use Vortexa freight data to dig deeper into these diverging underlying contributors to freight dynamics. 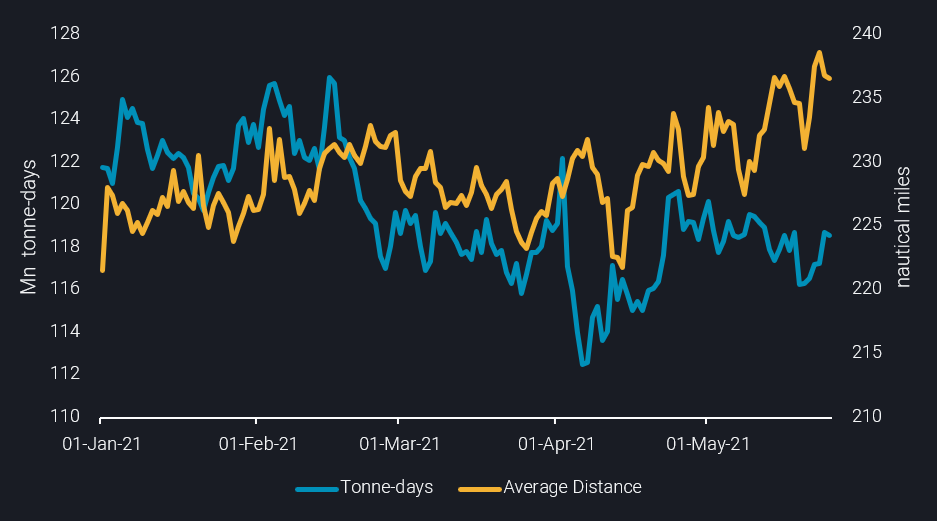 The drop in tonne-days demand corresponds to the gradual decline of the Middle East to Far East utilisation, which is the route that traditionally fuels the two biggest tanker classes. China’s limited import appetite for crude on the back of higher oil prices, elevated domestic inventories and refinery maintenance all contributed to decreasing the employment of the workhorses of the crude shipping market.

Against this backdrop, the VLCC and Suezmax tankers managed to find solace in an alternate oil import market: India. This would normally suggest a drop in mileage as the Middle East Gulf, the main crude oil exporter to the country, is very close to the Indian subcontinent.

However, OPEC’s decision to limit oil production despite rising oil prices sparked tensions between India and Saudi Arabia. As a result the former diversified its cargo sources, triggering a rise of long-haul voyages that eventually supported the average travel distance.

On the VLCC front, an increasing number of Indian-bound cargoes have been sourced from North and South America since mid-April. For the week ending 10 May, half of the utilised VLCC tankers towards India originated from either the Gulf Coast or the East Coast of South America.

Yet the Americas is not the only region that supports VLCC mileage. Since the start of Q2, around 10-15% of VLCCs towards the Indian Subcontinent came from Europe (UK Cont), at the expense of West African and the Persian Gulf cargoes (see chart).

VLCC origins towards India (%) vs. Middle East – Far East utilisation (no. of vessels)

Suezmax markets suffered from VLCCs picking up long-haul cargoes from the US Gulf, at the expense of their smaller-sized counterparts. However, losses in cargoes and mileage were compensated by Suezmax bookings from South America to India, a route for which currently utilisation has reached 10%, from almost zero a month ago.

Similar to VLCCs, Middle East to India crude oil volumes carried on Suezmax tankers gradually thinned in 2021, while volumes out of Europe gained market share. According to Vortexa data, in the course of May, utilisation from the Middle East Gulf dropped by 11 percentage points. Conversely, for the same timeframe the share of utilised Suezmax tankers originating from the Western Mediterranean and the Black Sea rose by 10 percentage points, adding approximately 2800 nautical miles per voyage. 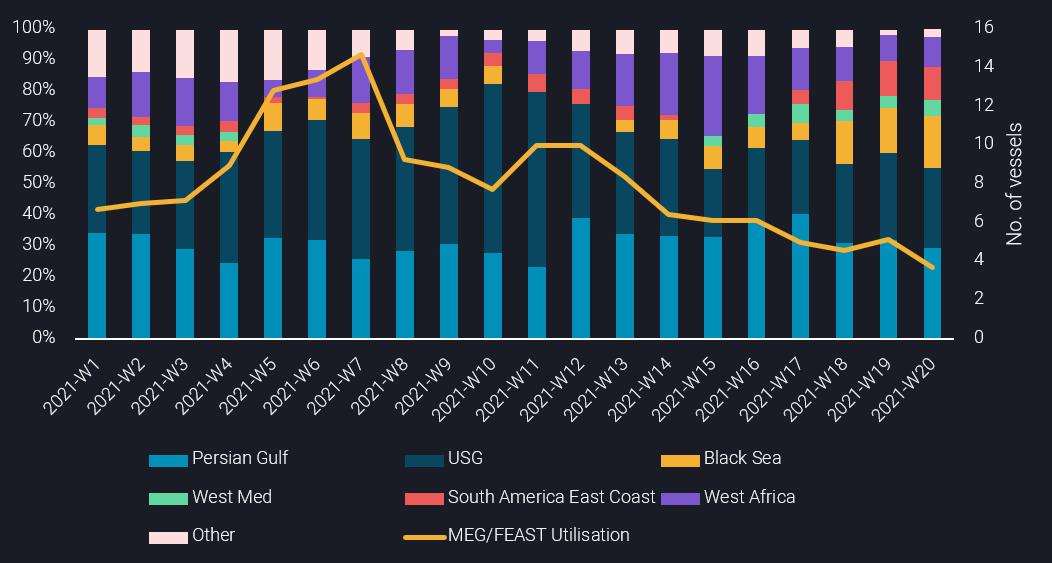 Will these long-haul voyages continue to support VLCC and Suezmax markets? Revisiting the relationship between India and Saudi Arabia, tensions have gradually relieved after the Kingdom decided to send oxygen to Indian hospitals amid the recent covid surge. At the same time, Covid-stricken Indian buyers are seeking to revamp their exposure towards more ample OPEC+ barrels, including a prospective ramp-up of Iranian exports.

Taking a step back and looking further than India, the signs are equally discouraging. Refining margins are rising in West of Suez markets while slumping East of Suez, primarily owing to diverging Covid-19 and related demand patterns. This development indicates higher crude volumes towards Atlantic Basin markets, which traditionally satisfy their demand via short-haul shipments. Every barrel staying in Europe or the Americas is therefore a double whammy for VLCC and Suezmax markets, as local shipments are frequently done on smaller ships, while long-haul exports to Asia shrink.

However, the current Covid-19 wave in Asia is likely to be overcome, and there is still a window for peak summer demand to support crude shipments and freight rates.