As the EU policies against Russia loom, we explore the the impact of trade flows reshuffling and the EU shipping ban on freight markets.

With the EU ban on Russian crude and products just round the corner, the unwinding of the Russian-European oil interdependency is underway. For crude barrels this has been the case for quite a while, with Europe managing to reduce its Russian crude purchases significantly. Yet for clean products (CPP) the change in trade patterns has just commenced. This is unsurprisingly most pronounced in diesel, as it is the main product that ties the two regions commercially.

It is also evident that the reshuffling is in full swing from both sides. Europe has commenced sourcing greater volumes of diesel from regions such as the US and the Middle East, while Russia has started raising its CPP exposure to outlets outside of the EU, the G7 as well as OECD Asia, as displayed below: 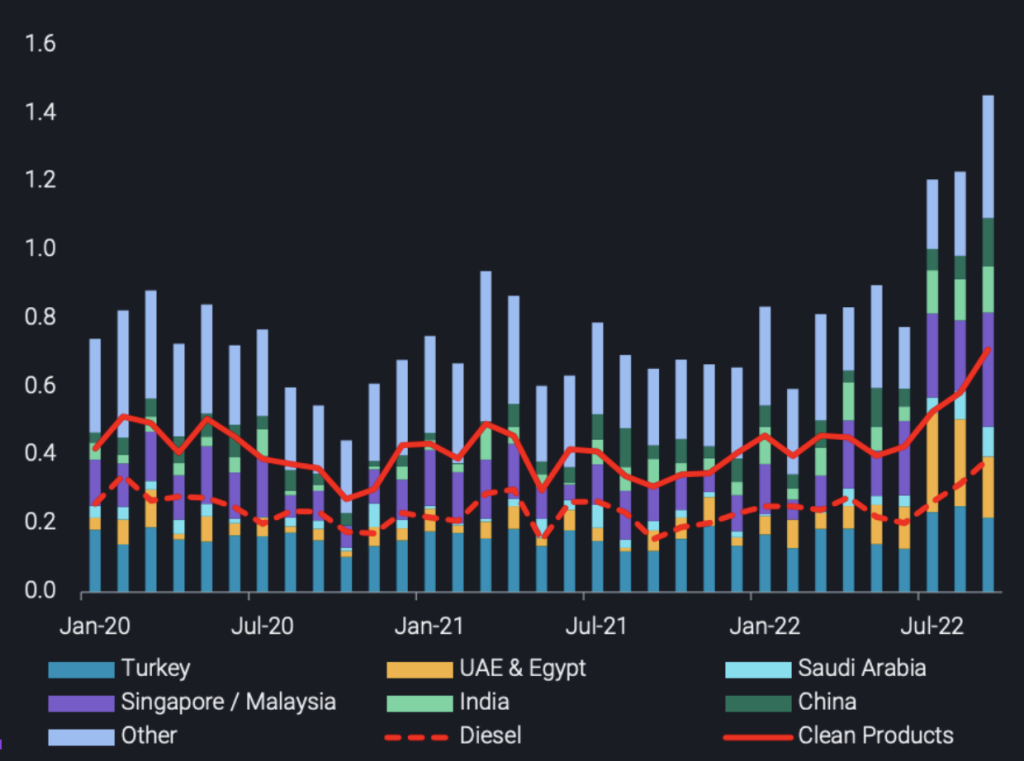 In this insight we will focus on how recent developments affect Russia from a freight lens, and attempt to answer two questions:

Russia mainly exports its products from the Black Sea and the Baltic regions and apart from buyers illustrated in the chart above, regions like South America and Africa have indicated appetite for Russian barrels. In a best-case scenario for Russia, the country would be able to maintain its current CPP volumes and redirect these to the aforementioned regions post the EU ban implementation.

In such a case the impact on tanker demand would be quite significant. To put it in numbers, this development would surge CPP tonne-miles out of the Baltic and the Black Sea by 70% and 40% respectively. Using our fleet utilisation data, this incremental demand corresponds to almost 10% of September’s global MR tonne-mile demand, while the percentage is substantially higher for LR1 (30%) and LR2s (20%). In vessel numbers, this corresponds to either an additional 86 MRs, 48 LR1s or 28 LR2s needed on a monthly basis.

Whether Russia will be able to maintain its product exports at current levels will not be impossible but rather challenging for a number of reasons. Referring to the chart shown previously and the lowering interdependence, the main difference is that although the latter has begun diversification it still struggles to find buyers to place all of its barrels. Even if it does so, the time lag and complexity of adapting to the trade framework of new unprecedented trade routes, and the possibility of a EU shipping insurance ban, both present hurdles for Russian export volumes. In a scenario where Russian CPP exports are slashed by half, there would be negative repercussions on the clean tanker market. This is translated to a loss of either 30 MRs or 17 LR1s or 10 LR2s, which would represent a 3, 10 and 6% loss in global MR, LR1 and LR2 tonne-mile demand respectively.

Talking about these hurdles, special attention should be given to the application of a shipping insurance ban by the EU-with the UK’s blessings – with the aim to hamper Russia’s oil and product exports, taking effect on the 5th December. In other words, the EU intends to sanction companies for insuring vessels carrying Russian cargoes to any destination. At the same time, there are efforts by G7 and the EU to implement an oil price cap on Russia. The oil price cap would allow exemption for vessels to be insured if the cargo is purchased at or below the price cap, however so far, these efforts have not amounted to anything substantial. Latest developments indicate that the implementation of a price cap by the EU has been agreed, however details on the level of the price cap are still being worked out.

Hence, this begs the question: Are there alternative candidates to carry Russia’s oil in the case that the shipping insurance ban takes effect and the oil price cap is delayed to be implemented or if Russia declines to sell cargoes below or at the agreeable level? If so, alternative candidates will mainly consist of Russian-affiliated vessels, tankers involved previously in sanctioned trades such as Iran and Venezuela as well as ice-class vessels which were purchased recently by Russian or unknown interests. This number of candidates are poised to increase as tanker sale and purchase activity has lately surged, reflected partially in old (15-year old and 20-year old) secondhand prices, in preparation of the ban. Moreover, a portion of the fleet might opt-in to get insured by markets outside the EU and the UK but this is not expected to happen at scale. 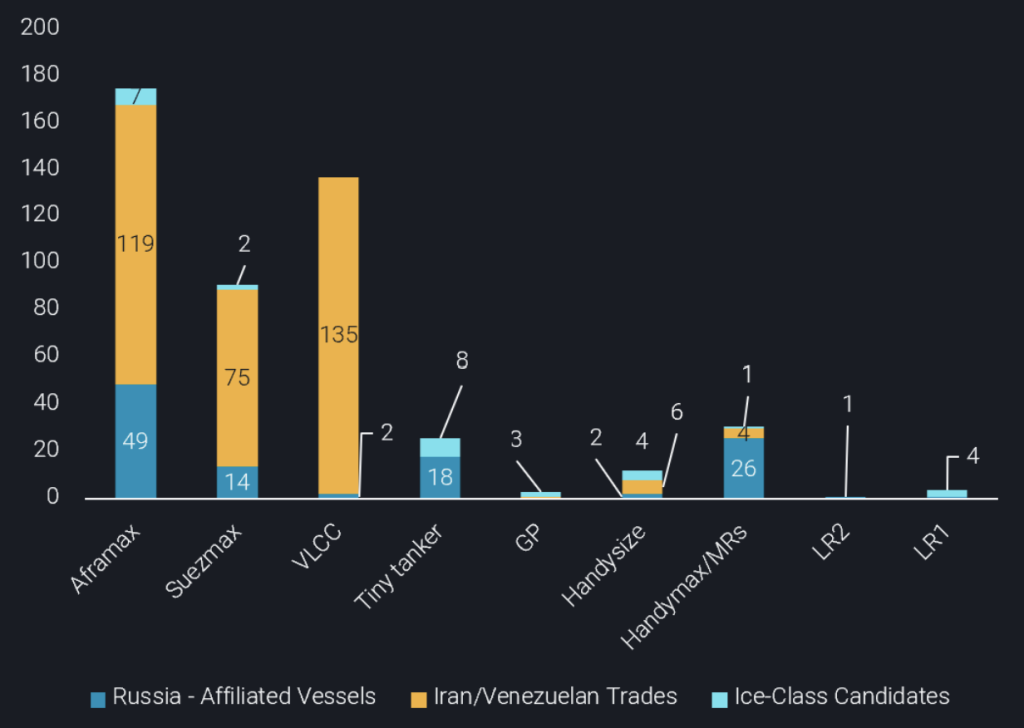 Number of candidates viable for carrying Russian oil and products post-EU ban (no. of vessels)

As the chart illustrates, the dirty segment has a greater number of alternatives which have previously been involved Iranian/Venezuelan sanctioned trade or have ties with Russian ownership. Additionally, India which has evidently ramped up its Russian crude exposure has displayed intent to insure vessels with Russian barrels heading to the country. However, the same cannot be said for the clean segment. For September alone around 150 tankers were utilised carrying fuel products out of Russia, while an additional 115 were ballasting back to the country to retain the continuous flow of cargoes. Even for the scenario where Russia’s volumes are slashed by half, the number of viable candidates remains dwarfed when compared to the fleet needed to transport such volumes.

This creates an additional headache for Russia, albeit a logistical one, but most importantly it highlights the impact of this specific regulation. From a shipping perspective the effects would be dire as these 200+ tankers would need to seek employment elsewhere. Russia and the mainstream shipping market are not the only two losers in such a development. In this diesel-thirsty environment, these Russian barrels could provide a lifeline and limit prohibitive pricing for diesel in the rest of the world amidst a challenging winter, further underpinning the criticality of an sensible oil price cap implementation, as the December deadline approaches.