In 2021, the majority of large-sized, newly-built crude tankers have been involved in clean petroleum products (CPP) trade for their maiden voyages. Until the beginning of May, 50% of the 14 VLCCs and 80% of the 16 Suezmax tankers that entered the fray loaded CPP, inevitably competing for cargoes alongside traditional clean tanker segments, such as LR2s.

Traditionally, these crude tanker maiden voyages are characterised by diesel/gasoil loadings in the East of Suez, either directly or via ship-to-ship transfers (STS), with discharging taking place in West Africa. Nevertheless, Vortexa recorded a Suezmax discharge in Northwest Europe during March, while a VLCC is signalling the ARA region for a discharge, an occurrence that has not been observed since October 2020. These cases of longer-haul shipments are adding to the tonne-miles of crude tanker classes, at the expense of LR2s.

The driving force responsible for this uptake of diesel cargoes is the currently depressed crude tanker market. This allowed charterers to benefit from the low freight rate environment of VLCC and Suezmax as well as the economies of scale that these tanker classes provide. This is more evident when looking at the 2021 average freight rates for the main routes of each tanker class. For VLCC and Suezmax tankers, rates have averaged 12.55 $/t and 7.69 $/t respectively, according to Argus Media. By contrast, the average rates of LR2 tankers are assessed at 21.38 $/t.

This stark difference between clean and dirty freight rates, is also underlined by two instances where Suezmax tankers were utilised for more than one clean cargo voyage. According to Vortexa data, CAPTAIN LYRISTIS and MARAN SOLON performed back-to-back voyages carrying CPP and clean condensates.  Even though this is quite infrequent, it is technically viable for newly-built uncoated tankers to ship CPP, but only for a handful voyages to avoid hull corrosion.

These developments had a severe impact on LR2 tanker employment. While utilisation of VLCC and Suezmax tanker newbuilds on clean maiden voyages rose considerably over the past two months, the number of LR2 tankers utilised in the East to the West of Suez carrying diesel/gasoil almost halved over April (24 LR2s in the end of March vs 13 LR2s during in the end of April), as displayed in the graph below. When looking at the bigger picture, these 11 unutilised tankers translate to almost 10% of the global LR2 average utilisation in 2021, according to Vortexa data. 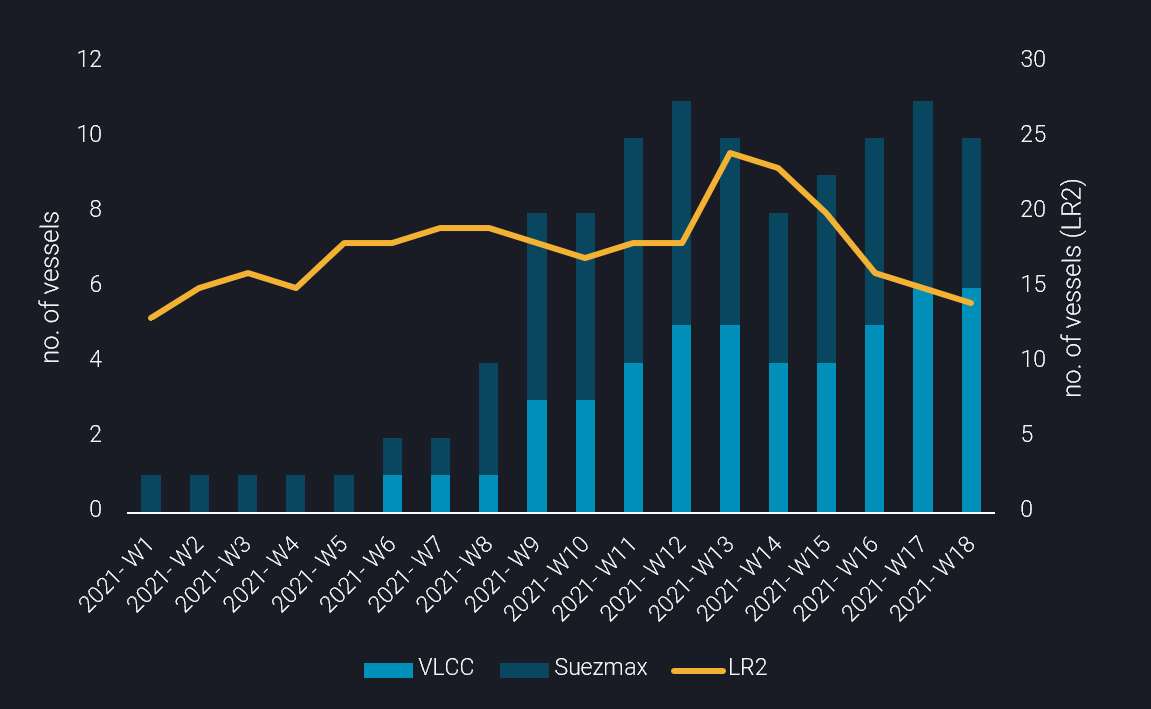 Utilisation of 2021 newly-built VLCC & Suezmax carrying clean (LHS) vs. Utilisation of LR2 from East to West of Suez carrying diesel (RHS) (no. of vessels)

Looking ahead, the uptake of clean cargoes carried by crude tankers on their maiden voyages is set to continue in May and June. According to our data, 1 VLCC and 2 Suezmax tankers have finished their sea trials and are expected to load CPP soon. Overall, 9 VLCC tankers are expected to hit the waters in the period May to June, keeping pace with VLCC deliveries recorded in the first 4 months of the year. Yet regardless of the number of deliveries, if an uptick in crude markets materialised in the months to come, this could dampen the interest for clean maiden voyages. However, despite an anticipated OPEC+ increase in exports, China’s potentially range-bound crude appetite may well cap any considerable increase in VLCC freight rates.