As the first half of the year draws to a close, Vortexa takes a look at the behaviour of newbuild supertankers and influencing factors.

Another quarter comes to an end, and except for short-spelled spikes, VLCC rates remain in shallow waters or often rather underwater. At the same time, diesel and other fuel prices are soaring, as the refining industry struggles to meet global demand, with strong pockets in various long-haul markets such as LatAm, East Asia and Oceania, East Africa and the Mediterranean. This is the main contributing factor that has driven both the MR and LR freight rates to 2-year highs at some point throughout Q2 2022.

Poor supertanker earnings combined with a tight clean tanker market amid high diesel trade demand are typically the ingredients which give birth to a surge in CPP-loading activity onboard newbuild VLCCs and Suezmaxes during maiden voyages. Nevertheless our data contradicts this idea, especially when compared with 2021. Utilisation of newbuild VLCC and Suezmax tankers carrying clean products has been on a declining trajectory post-Q2 2021 and a considerable recovery has not taken place. 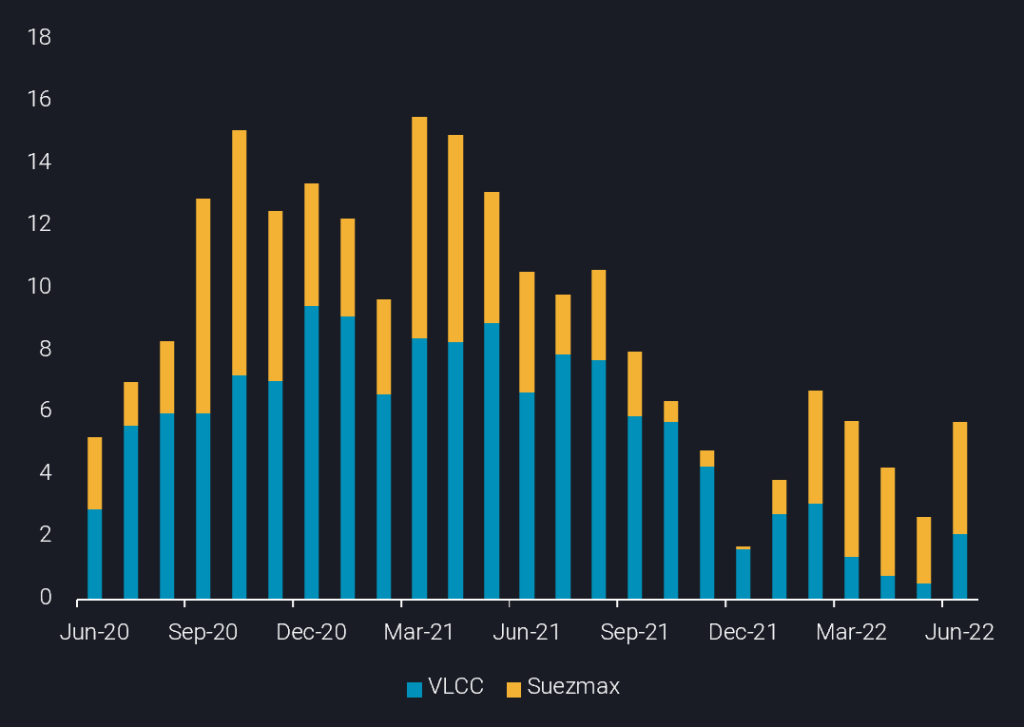 Utilisation of newbuild VLCC and Suezmax tankers carrying CPP (no. of vessels)

The dip in employment cannot be attributed to the amount of deliveries seen this year. The number of VLCC deliveries for both years is relatively the same. 23 VLCCs hit the waters in H1 2021, against 22 so far this year.  However, the percentage of VLCCs carrying clean has been slashed in half: 51% in 2021 vs 24% in 2022. The difference is even more stark for Suezmaxes. For H1 2022, Suezmax deliveries have already surpassed the total deliveries recorded for the whole 2021. Yet only 46% of them have carried CPP this year, compared with 74% last year.

In order to identify the reasons behind this drop in CPP maiden activity, a closer look on the flows that involve this kind of voyages is required. Traditionally, the two key regions absorbing diesel cargoes on newbuild supertankers are South America (East Coast) and Europe. 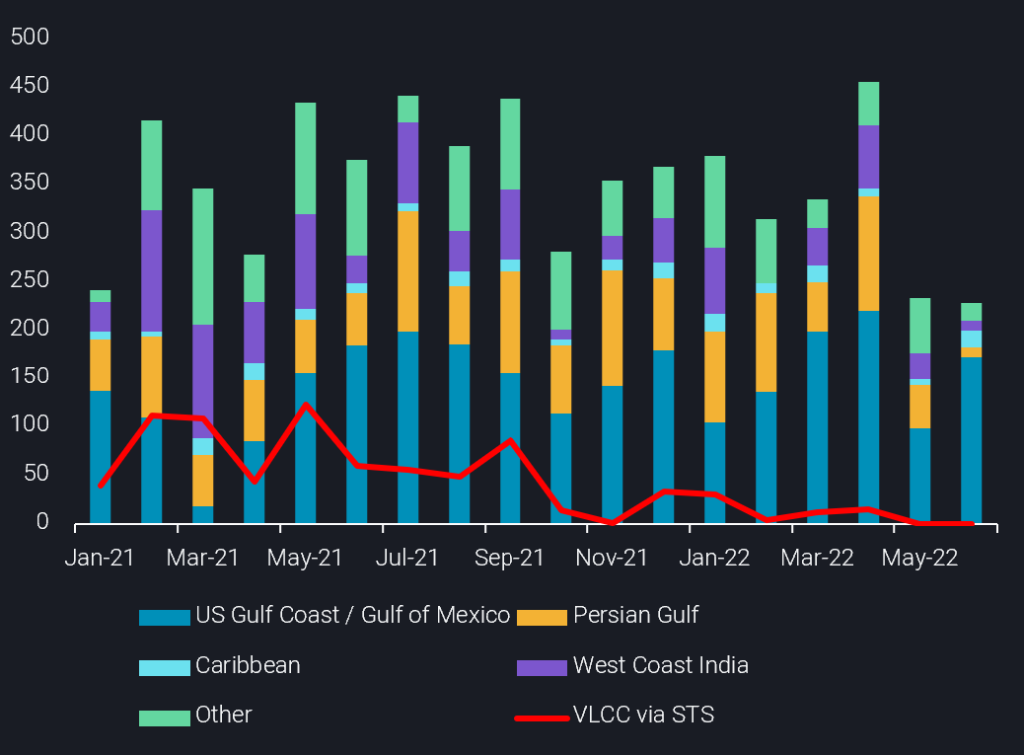 As the chart displays, diesel exports of South America are stemming mainly from the US Gulf – predominantly on MRs -, the Persian Gulf as well as the Indian subcontinent. Exports from the latter two regions were supported in 2021 by Suezmax and VLCCs. However, the trend did not continue through this year. Diesel volumes from the Eastern hemisphere to South America thinned in 2022, with MRs also ramping up their share, according to our data.

A similar case has unfolded in Europe, with only a handful of cargoes on VLCCs heading there, predominantly out of the Persian Gulf. Europe has raised its exposure to Middle Eastern diesel, in an attempt to diversify its sources, but from a freight perspective, the winners in this case are the LR2s which are continuously raising their employment ex-Middle East.

The overarching theme is that even though key demand centres are still importing diesel – and at high rates – they are doing so at smaller vessel classes, despite the spread between dirty and CPP rates. The key difference with last year distils down to the pricing structure of diesel. Currently diesel is strongly backwardated, unlike 2021. Last year’s contango structure, meant that it was more valuable for traders to bide their time, filling up a VLCC via STSs and subsequently selling the cargoes to an export market. In other words, cargo was getting more valuable at sea.

However, the current diesel market tightness does not allow for such a time-consuming operation. Markets across the globe are diesel-thirsty, product inventories are at low levels, deeming it essential for market players to satisfy demand as soon as possible in a type of cut-throat competition. Looking ahead, against the current geopolitical backdrop and the upcoming winter season any diesel cool-off in prices seems only temporary, meaning that unlike 2021, newbuild CPP voyages will likely remain meagre and sparse throughout the year.