Scrubbers continue to buoy returns for owners, but for how long?
Share

Vortexa Insight: Scrubbers continue to buoy returns for owners, but for how long?

The global shift towards 0.5% sulphur bunker fuels (IMO 2020) at the start of this year was meant to herald a wide high-low sulphur fuel oil spread that would justify expensive scrubber retrofits. But the global oil demand shock has since overtaken IMO events, weighing on marine fuel prices from the first quarter.

With a sizable portion of the combined VLCC and Suezmax fleet now equipped with scrubbers, the current dilemma for shipowners considering scrubber installations pits less favourable economics – as the narrower HSFO/LSFO spread prolongs payback periods –  against the optimism of higher long-term return potentials for owners with scrubber-fitted vessels. But in a high freight earnings environment the latter acts equally as a deterrent, delaying scrubber installations for fear of missing out on short-term gains.

Vortexa data show that 22% of VLCCs and 13% Suezmaxes are equipped with scrubbers as of mid-May 2020. Close to 60% of these tankers are 5 years or younger, with a longer trading lifespan to recover the full cost of the scrubber investment. But we also observe some tankers older than 15 years fitted with scrubbers. As a percentage of the total tanker fleet, on a deadweight tonnage basis, tankers with scrubbers make up 16% of the global fleet.

Operating on scrubbers does come with its own set of risks. A narrowing spread between high and low sulphur fuel oil would increase the payback period of the scrubber investment. And several ports across China, Europe the US and Singapore have banned the use of open-loop scrubbers, requiring ships to switch to compliant fuels when they are within port limits. 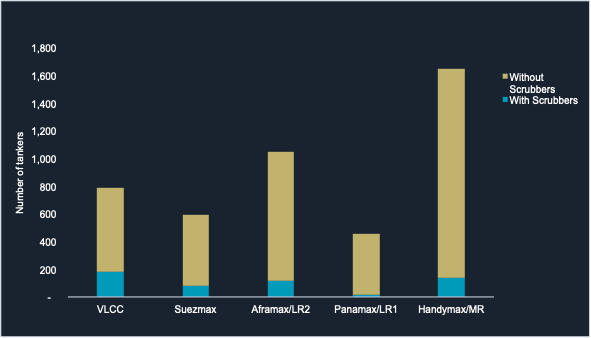 Shipowners who have already installed scrubbers have benefited from lower fuel costs, especially on larger tanker classes such as VLCCs. Year-to-date, VLSFO (or 0.5% fuel oil) bunker premiums have averaged $143/mt above HSFO across key global bunkering hubs, with that of marine gasoil (or MGO) even higher at $198/mt, according to Braemar ACM data.

A scrubber retrofitted, eco-VLCC chartered to deliver crude from US Gulf Coast to China and back, is estimated to consume approximately 4,700 tons of HSFO, at a cost of $1.36mn, using average Houston spot bunker prices, year-to-date. Comparatively, operating on VLSFO would have cost $1.84mn for the same voyage. This translates into a $4,280/day (or $479,000 total) fuel cost savings for a scrubber-retrofitted tanker.

For the same voyage, a non-eco tanker, with a higher HSFO consumption of approximately 7,100 tons, would have yielded cost savings of $6,500/day (or $732,000 total), equivalent to 11% of $6.5mn – the maximum price for a VLCC scrubber retrofit according to market participants. 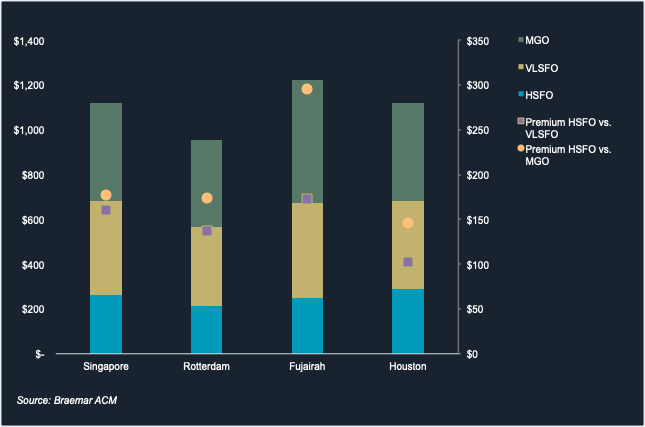 The wider the LSFO/HSFO spread, the shorter the payback period. The recent surge in freight rates has favoured shipowners who charter out their scrubber-fitted tankers, cutting their payback period significantly. During January-February, the Houston LSFO/HSFO bunker price spread widened, and briefly pushed the payback period for shipowners down to just 2.5 years. This has since increased to around 5.6 years as of May 2020 as the fuel oil spreads have narrowed amidst a fall in oil prices and freight demand.

Against a backdrop of high freight rates and narrow LSFO/HSFO spreads, many shipowners with planned scrubber installations have deferred them to maximise the current multi-year high spot market returns. Uncertainty over the future fuel spread and freight demand outlook has also dampened shipowners’ appetite for scrubber installation.

Vortexa data reflects the drop in HSFO loadings vs. LSFO over the course of the past few years, with a clear uptick of LSFO exports seen throughout 2019 as the industry geared towards the change in sulfur limit regulations.

HSFO demand has been kept afloat by around a sixth of the global tanker fleet still operating with HSFO for bunkers, as well as demand from the power generation sector. Meanwhile the build up of LSFO in floating storage, especially offshore Singapore/Malaysia, could take longer to draw down than previously anticipated, as the ramifications of a recent dip in global oil demand and positive scrubber economics for shipowners continue to support HSFO demand.

Interested in a more detailed view of our freight data and these flows?