In this insight we revisit the Suezmax tanker performance versus competing vessel classes at key regions, in the aftermath of the Russian invasion.

A month ago, during the first and quite uncertain days of the Russian invasion in Ukraine, we published an insight into how crude tanker demand could be affected by the recent developments. The verdict was that overall tanker tonne-miles would remain stable despite the flow shifts caused by the conflict, with Suezmax tankers slightly benefiting. Fast forward a month later, we revisit this commentary by examining Suezmax performance versus competing vessel classes at key regions.

The main regions where Suezmax tankers operate and have seen an impact from the conflict, directly or indirectly, are the Black Sea, the US Gulf Coast and West Africa.

Suezmax TD6 freight rates (Black Sea-to-Mediterranean) continue their slump after a spike in February on the back of high war risk premiums. The main driver of this slump is the lower tanker demand towards Europe but nevertheless, Suezmax activity out of the Black Sea has been busy. Suezmax tonne-miles out of the Black Sea and towards the Far East and India have risen at the expense of tonne-miles towards European countries. This has led to Black Sea-to-Far East freight rates holding firm at higher levels, while TD6 drops off, according to Argus Media pricing assessments. Yet it still remains a question whether Suezmax demand out of the Black Sea will remain robust following the CPC infrastructure issues, which push Black Sea exports lower in April. India’s crude appetite holds the answer to this question We see the nation has already raised its exposure to Russia crude, at a time where Europe shuns Russian oil, the question is to what extent this could grow. This will be a key determinant for Suezmax demand, with Aframax tankers bearing the brunt of a lack of short-haul trades. 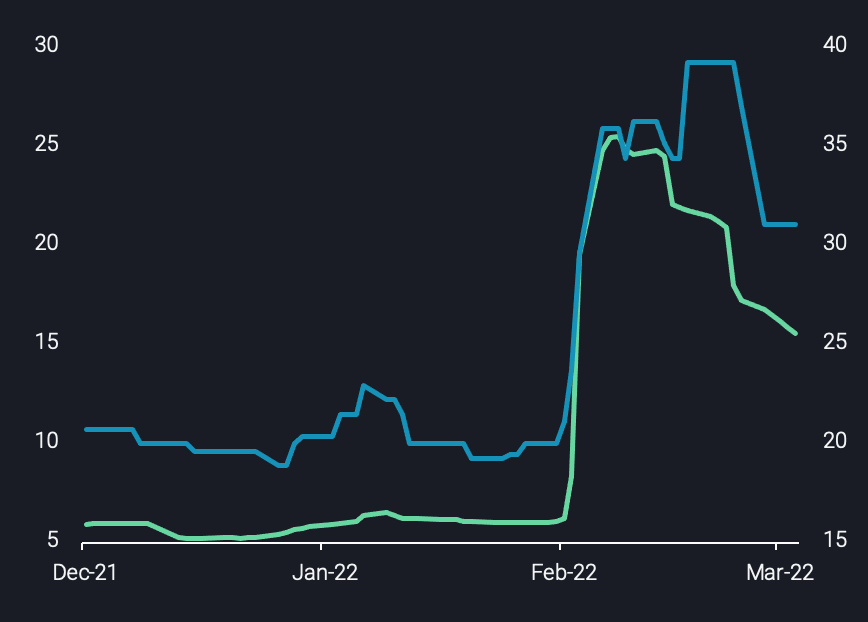 In the US, Aframax freight rates for the US Gulf-to-Europe (TD25) and Suezmax tankers are continuing their rally, reaching their highest point since the floating storage boom that was observed during the first wave of the pandemic (April 2020). This is derived from the high crude exports out of the US Gulf Coast, especially towards Europe, which have kept the combined Aframax and Suezmax utilisation hovering around 12-month highs. The widening Aframax-Suezmax rate spread – which currently sits around 18 $/t, according to Argus pricing (up from just 10 $/t a month ago) – has prompted charterers to seek Suezmax tankers to carry the cargoes. Unsurprisingly, this has increased the Suezmax tonne-mile share for the route, at the expense of Aframax tankers. For the time being there is no evidence of the US Gulf Coast exports slowing, especially as Europe is seeking an alternative to Russian cargoes. Simultaneously, Aframax availability remains at low levels in the PADD 3 region. This is a strong signal that the trend of loading crude on Suezmax tankers out of the US Gulf Coast will likely continue. 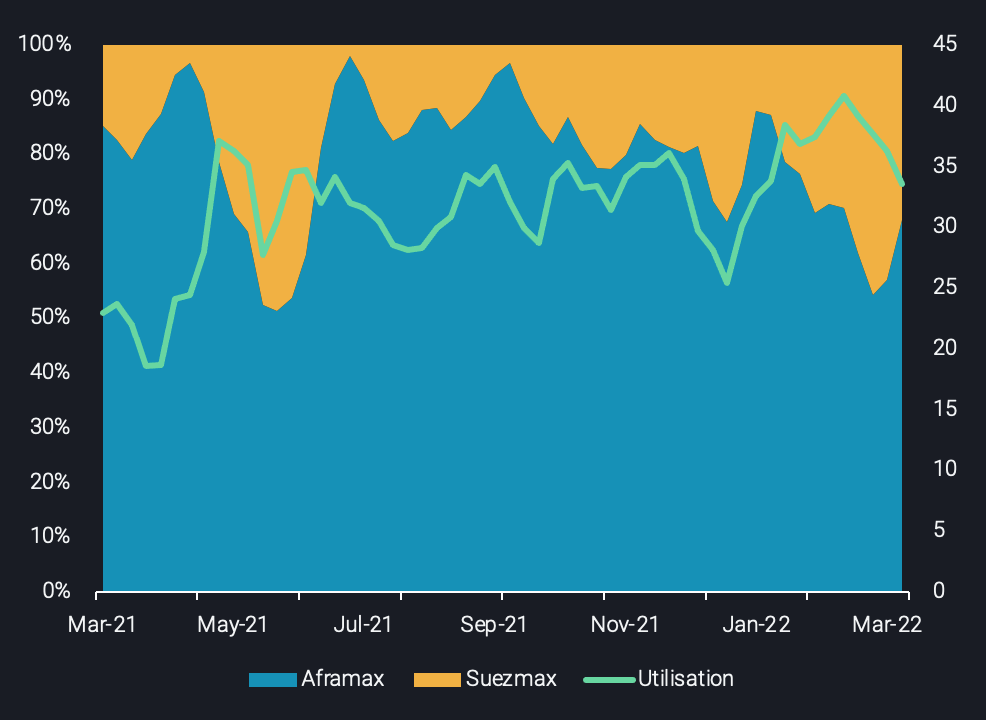 Higher volumes of Russian crude heading from the Baltic and Black Sea to Asia have triggered a shift in patterns, which in turn affects the freight market in West Africa. Utilisation for Suezmax tankers in the region heading towards Europe has slightly increased in recent days. Conversely, there has been a decline in VLCC utilisation out of the region- rising West African flows to Europe are the main driver. As a result, while VLCC West Africa-to-China (TD15) freight rates continue their downward trajectory, the increased support on Suezmax has kept West Africa-to-Europe (TD20) rates stable, after the sharp drop witnessed at the start of the month. 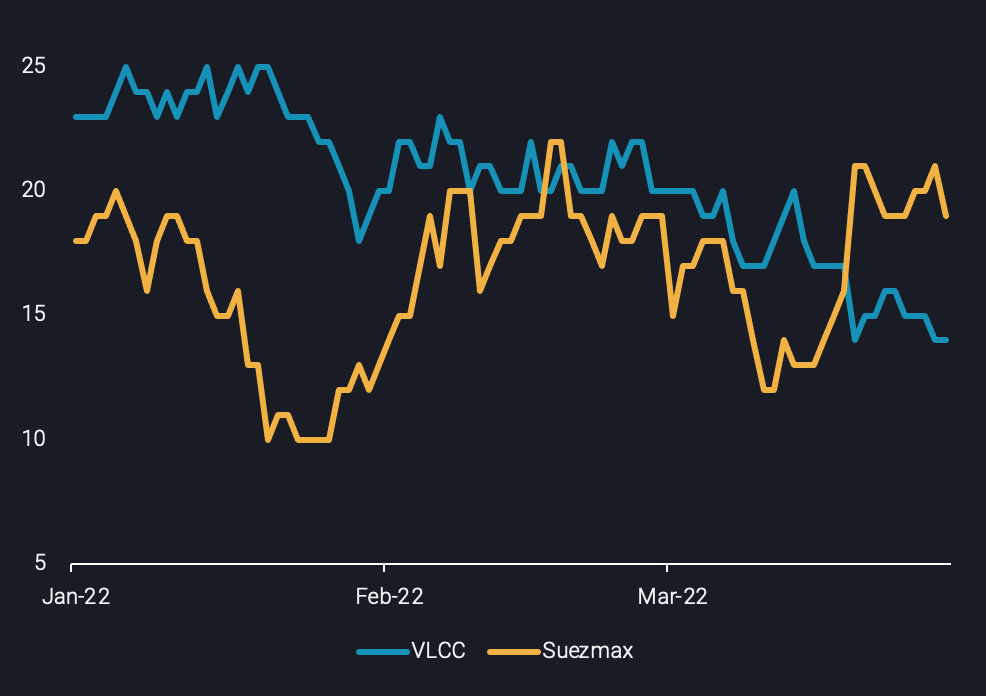 VLCC vs Suezmax Utilisation out of West Africa (no. of vessels)

The overall performance of VLCC earnings remains in the doldrums, having fallen to all-time lows during the the end of last week, according to the Baltic Exchange. Looking at the global fleet, the laden-to-ballast share is currently at its lowest point for the quarter. Even though freight rates for Middle East-to-Far East (TD3C) slightly climbed during the past few days, this is only in response to rising bunker prices. At the same time, oversupply continues to plague the vessel class with an increasing number of VLCCs ballasting from East Asia. It is likely that many of these ballasters are unlikely to find employment again quickly given the weaker outlook for Chinese demand, as lockdown measures again rollout in the country.

Despite an implied decline in domestic consumption, Chinese buyers could potentially exploit massive discounts for Urals and build-up stocks. This development would not necessarily support the overall freight demand. A growing number of owners are reluctant to do business in Russian ports in exchange for maintaining a decent reputational profiling, will potentially open up a two-tier market. Currently, there are five vessels carrying Urals towards Asia, which is not enough to alleviate the mounting pressure on VLCC demand. Moreover, at the time of writing, no VLCCs are observed ballasting to the Baltics, nor a fixture has been recorded for future loadings out of the region. At the same time, major independent traders have publicly distanced themselves from future dealings with Russian crude, casting further doubt over the future of Urals plays on VLCC tankers.