Vortexa and Windward build a case for the importance of risk management in shipping, in a case study on Venezuela

The application of trade sanctions on oil and shipping markets has far reaching effects that extend beyond the specific entities they target. As a result, in today’s globalised maritime ecosystem, companies across the oil supply chain are recognising the need to actively assess the risk of dynamic sanctions and regulatory environments.

This report brings together Windward intelligence and Vortexa data on maritime risk factors, dark movements, vessel specifics and cargo flows in a case study examining the risk posed to the global maritime fleet of association with the Venezuelan oil trade. We illustrate that sanctions do not impact only sanctioned or high-risk entities, but have a direct impact on the risk profile of lower risk participants along the supply chain.

The fleet profile of Venezuelan oil trading: Tankers that get the job done 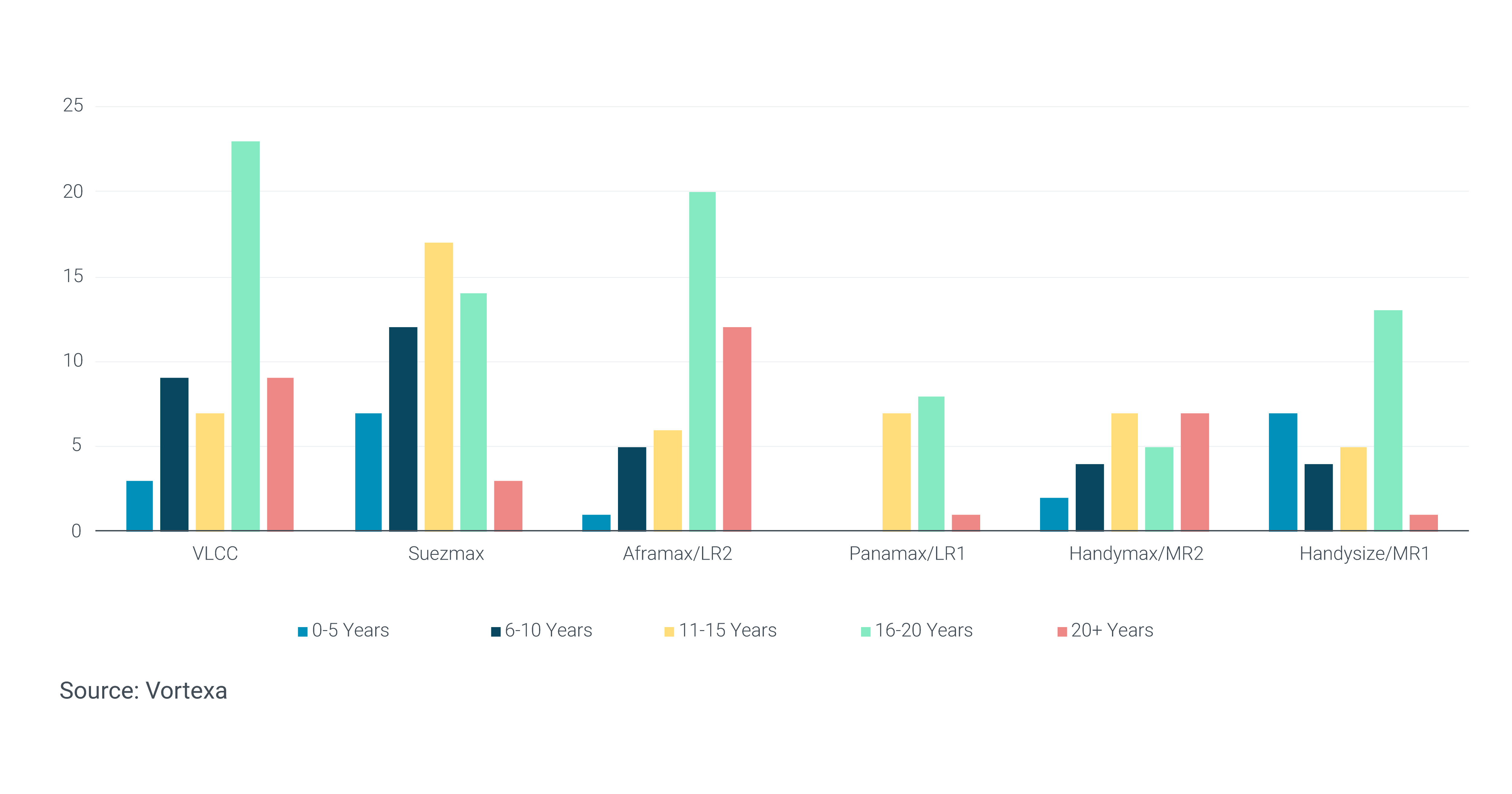 Of these, VLCC tankers account for 23% of the total fleet, highlighting the importance of crude exports travelling long-haul among these movements.

In terms of the tanker profile, Vortexa data further show that those aged above 15 years account for 51% of all tankers identified – i.e. a relatively older fleet, and reflecting a lower weighting placed by charterers on tankers involved in these trades being oil major approved – and instead an emphasis on a tanker that can get the job done.

The first point to note is that less than 10% of the fleet that we identified as being involved in Venezuelan trades in the last 12 months is actually sanctioned. In other words, most of the trade is being conducted by legitimate vessels, which in turn, puts them at risk of being sanctioned should regulations change.

The second point is that a ship does not have to call in Venezuela to be at risk, indeed many of the unsanctioned tankers do not have port calls in Venezuela. Their risk designation comes from suspicious loitering or meeting with ships that themselves have come from Venezuela.

Without screening for STS, Dark Activity (AIS manipulation) or loitering it is difficult to distinguish between vessels that only passed through Venezuelan waters vs those that took on cargo. To put this in perspective, Windward insights show that over 1,000 tankers came through Venezuelan waters in the past 12 months, only a minority of which took on cargo. The US Gulf coast to Latin America flow of clean petroleum products is an important contributor to activity along this route, for example, even though they are disassociated from the Venezuelan trades. 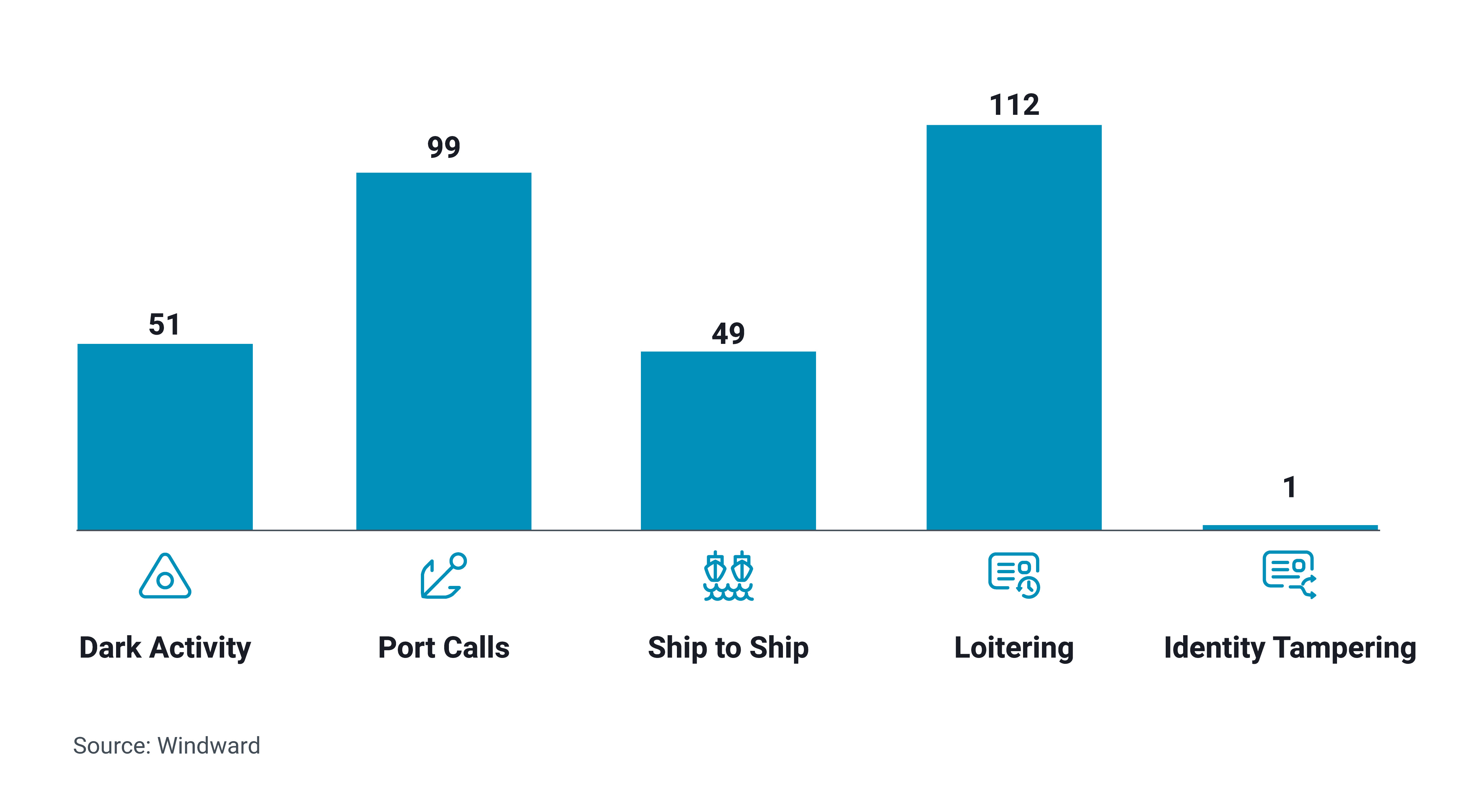 Risk drivers of the Venezuela trading fleet (count of instances)

Dark activities: It’s not about what you see, it’s what you don’t see

Tankers have many ways of concealing where and with whom they are trading, making it imperative for charterers and other shipping market participants to identify as many of the potential risks as possible, particularly in a climate of changing sanctions regulations.

It’s no coincidence that the so-called dark activities of the fleet in question are concentrated in areas of the world that are at risk of sanctions evasion, such as the Eastern Mediterranean, the Middle East Gulf and Malaysia. According to Windward, some 173 ships or close to 80% of the identified fleet had at least one Dark Activity and many were repeat offenders 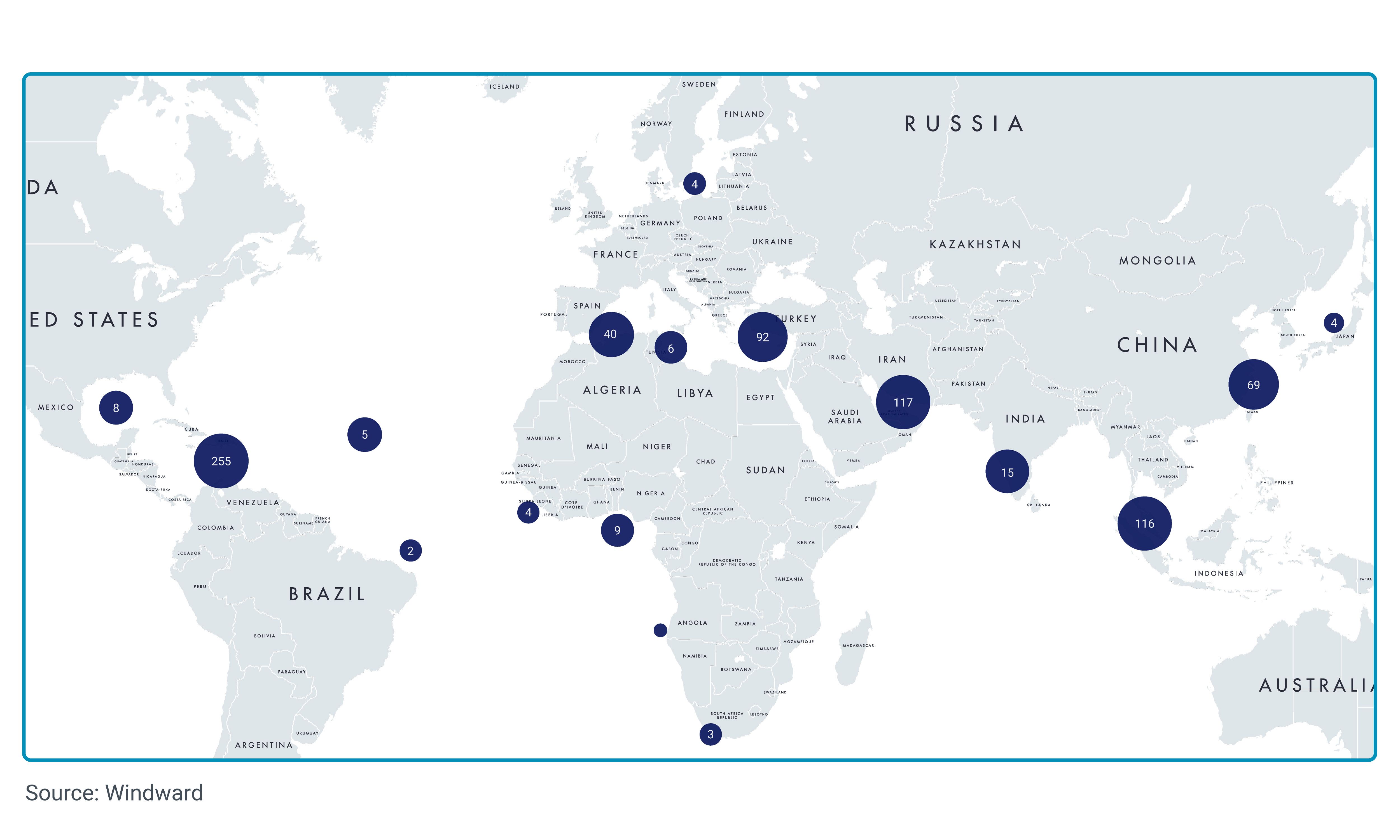 Ship-to-Ship (“STS”) transfers – typically a legitimate activity between tankers transferring cargo – is already now a well-established activity of choice for tankers who want to obscure the origin of the product. This means that the key to unlocking the origin or final destination of a cargo is not just where the ship has been, but who it has met along the way.

The fleet of tankers involved in Venezuelan trades over the past year met 600 other tankers that have not visited Venezuela themselves according to Windward analysis. Over half of such meetings occurred on the other side of the world. This second order analysis reveals that there may be three times as many tankers involved in trading with Venezuela, than those that have actually gone there in the past year. Assuming a global tanker fleet size above 9,000 tankers, this represents close to 10% of the global fleet that could potentially be associated with the transport of Venezuelan cargoes.

What is surprising however, is looking at STS activity and where it took place. Data indicate that whereas 20% of worldwide STS activity between tankers occurs in Malaysia, this number rose to 50% for tankers involved in the Venezuelan trade. This highlights Malaysia as an important area for STS activity with regards to the Venezuelan trade, further indicating a potential appetite from buyers in the region, largely China and Malaysia, for Venezuelan crude amongst other types of cargoes. 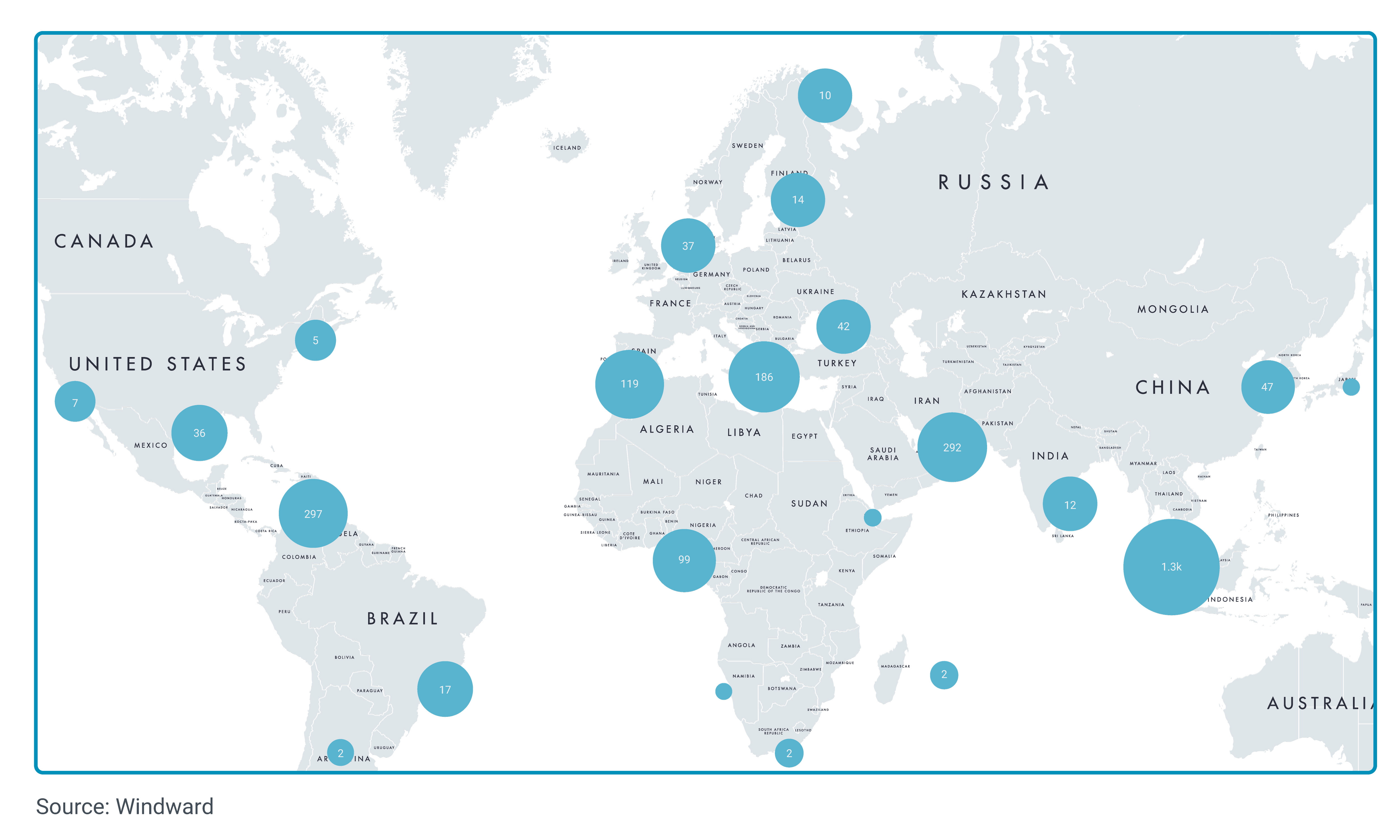 Cargo risk analysis: Ways to clean up the act

By extending the Windward risk rating of each tanker to its contents carried as identified by Vortexa, we were able to draw up a cargo risk profile analysis. Our results show that two thirds of the volumes identified fall under the high risk rating, underlining that the majority of cargoes are not sanctioned. Surprisingly, 16% of cargoes are considered low risk, a higher number than sanctioned cargoes. The change in risk rating of these cargoes is an indication of previously high risk tankers having had their risk rating downgraded from high to low risk. This follows 6 months of lack of suspicious activity as per Windward data, or in other words, a “cleaning up” of their act. Our analysis highlights 11 such vessels that indeed went from high risk in January 2020 to low risk today having ceased all risky behaviour since.

The aggregation of products is based on cargoes moving to and from Venezuelan ports (excluding intra-movements), as well as tankers involved in ship-to-ship STS transfers of Venezuelan oil. It is important to note that certain companies involved in shipments were expressly permitted to transport crude and products to- and from Venezuela during the sanctions period, in accordance with regulations authorising them to continue activities under existing agreements and on humanitarian grounds. 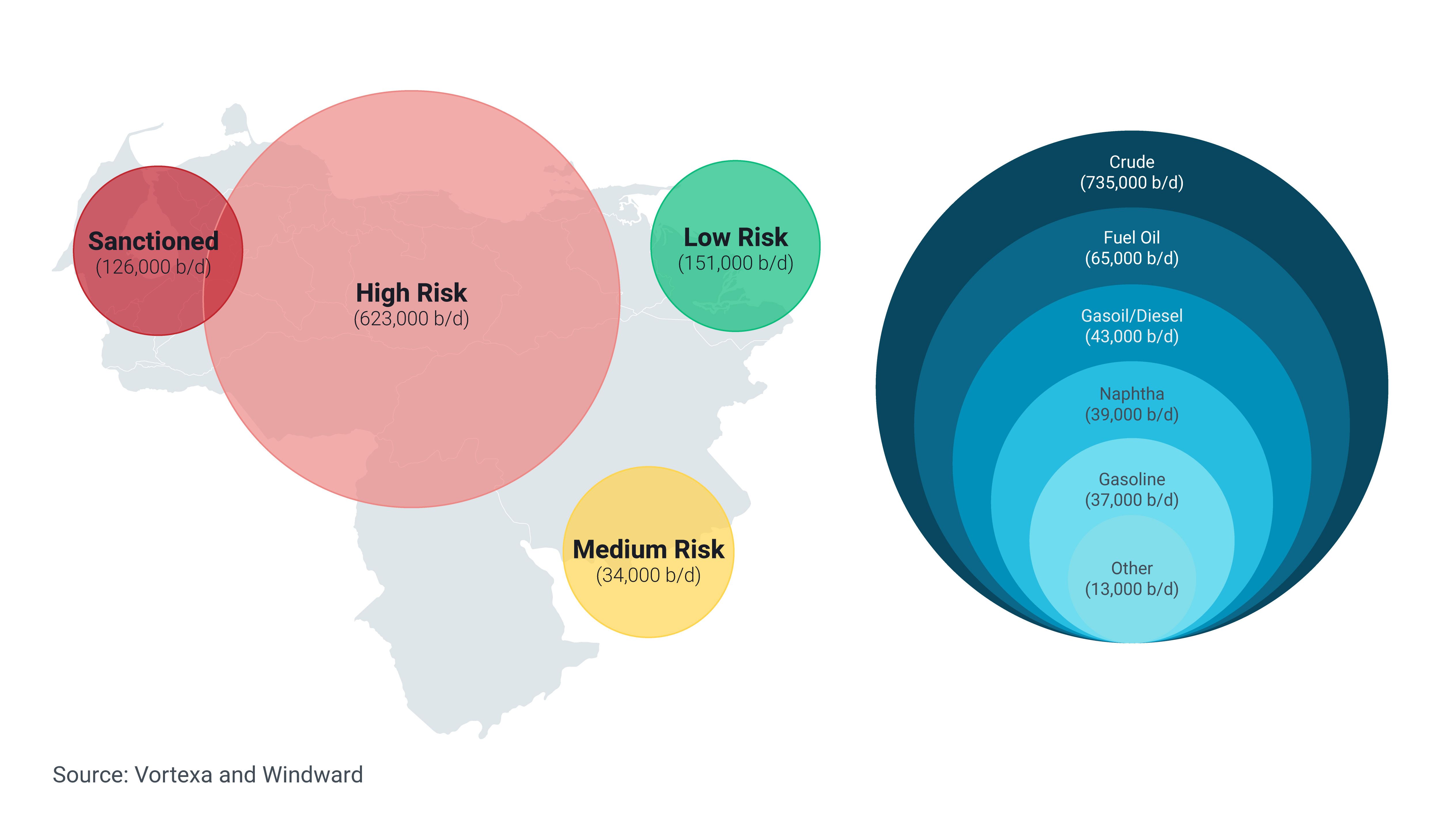 Countries of origin of effective control: The global connection

How diverse is the fleet involved in the transport of crude and refined products to and from Venezuela? Do we see a small number of countries involved in bilateral trade or have tankers involved in the Venezuelan oil trade remained an integral part of interlinked global flows across a wider slate of origin countries? The answer lies in the infographic below: 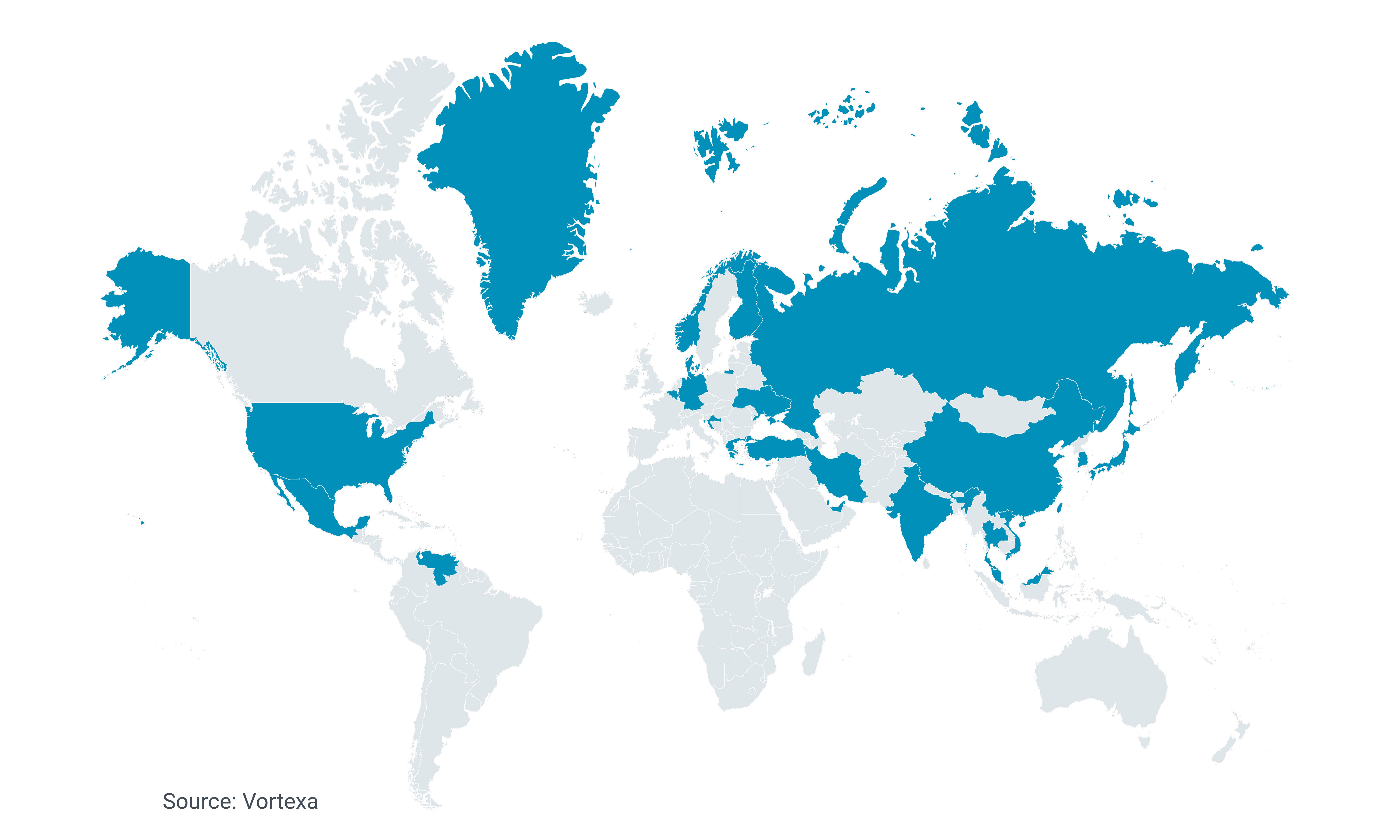 The global aggregate number of parties involved highlights the sheer interconnectedness of the maritime ecosystem, despite the intention of sanctions to deter trade. For this reason, charterers have for some time now become more scrutinising when chartering tankers that have called at Venezuelan ports in the last 2 years.

Venezuela’s crude oil and products trade is deeply interconnected with the globalised energy and shipping markets, as we’ve shown in this joint collaboration between Windward intelligence and Vortexa data. Combining our capacities in vessel behaviour analysis and seaborne energy flows tracking, and the identification and assessment of vessel risk drivers, we quantified some of the key risks associated with the tanker fleet involved in Venezuelan trades, in light of the existing sanctions environment.

Notwithstanding the application of trade sanctions – which serve as an added complexity to entities involved in this market – the reality remains that the shipping industry is opaque, and the ability to track cargoes on board through dark and STS activities is crucial to being able to see interactions in a clear light, helping increase accountability and minimise risks.

Interested in trying our data? Get in touch today.