We recently passed the 1st half of this quarter, which experienced significant developments on the CPP market. Record-high product cracks, and decreasing CPP inventories worldwide painted a fuel-thirsty global picture. Towards the West we observed a surge in flows of MR tankers carrying diesel and gasoline in April, while in the East MR tanker activity has picked up as well to some extent amid thinning vessel supply.

West of Suez the main power behind global tonne-mile boost…

As we can see from the chart above, preliminary CPP volumes have increased Q-o-Q but lagged 500kbd from pre-pandemic volumes. Similarly, tonne-miles for CPP are up Q-o-Q by 3.5% but are down 3% y-o-y. This elevation is mostly attributed to MRs which show a 4% increase Q-o-Q, while LR and Handysize tankers also managed to narrow their deficits slightly from 2019 levels. Especially in April the increase in MR tanker demand was mainly a result of strong CPP flows in the West of Suez: 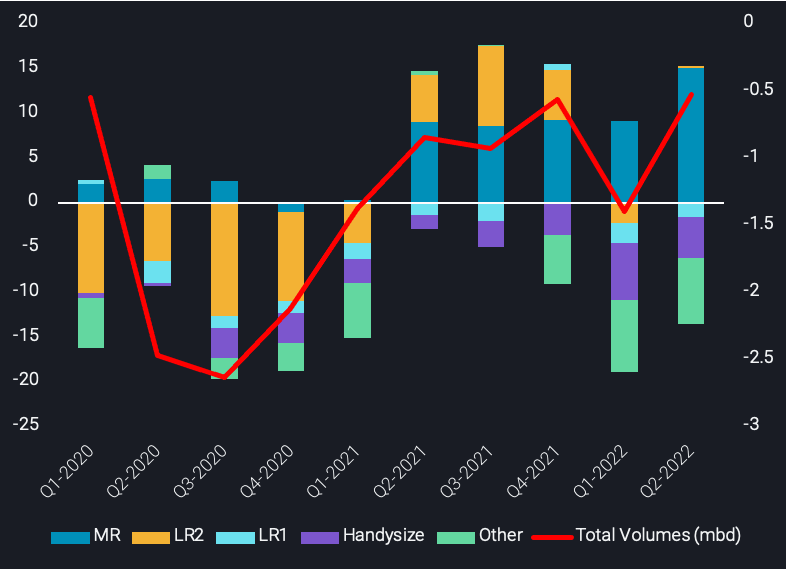 …but the East adds momentum as well

Nevertheless, it was not only the activity in the West which contributed to this increase in clean tanker demand. Recent developments in the Eastern hemisphere have also played an important role in the resurgence of the global CPP tonne-miles.

This resurgence was also reflected in the Pacific MR rates which reached a 2-year high at the beginning of May, almost tripling shipowners’ rates in a window of a month. The rally in rates was driven by a combination of both supply and demand dynamics. More specifically, the strong flows seen in the Atlantic led to thinning vessel supply of MR tankers in the Pacific Basin, as vessels have gradually repositioned from the East to the West of Suez. Additionally, CPP tonne-miles for MRs ex-East of Suez have been on an upward trajectory, supported by increasing diesel flows, headed to countries like Australia and South Africa. 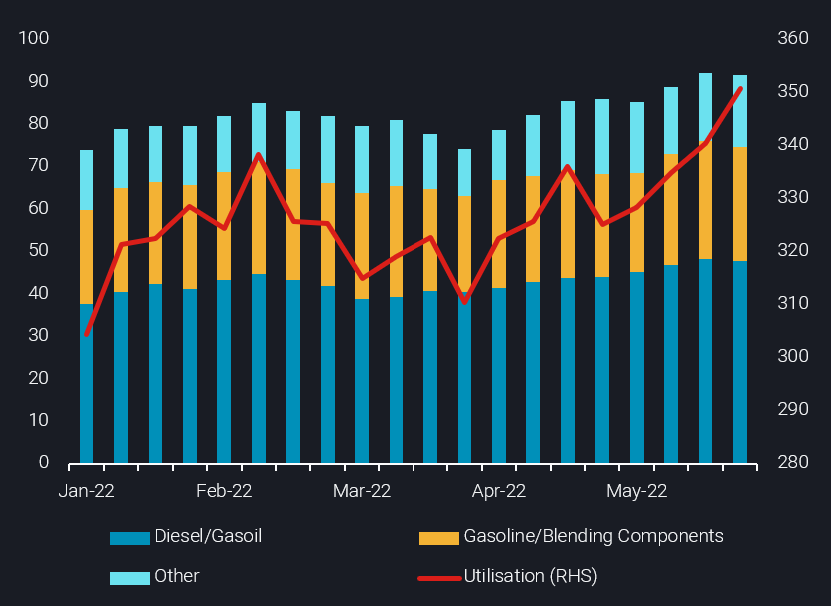 MR CPP tonne-days out of East of Suez per product (mn tonnes, LHS) vs MR utilisation (no. of vessels, RHS)

However, diesel volumes on MRs have plateaued during last week, as diesel cracks are subsiding. Along with cracks, freight rates in the Pacific have come down in tandem. According to Argus Media, rates for South Korea-to-Singapore and Singapore-to-Japan have declined by 40% and 20% respectively. MR availability on the other hand is on an increasing trend following the yearly low reached in mid-April, which could likely lead to a further drop in rates in the short run. At the same time, the weak naphtha demand in the Far East has caused LRs to find employment away from the traditional Middle East-to-East Asia route. This has resulted in a cannibalisation of MR routes where LR tankers have increased their market share at the expense of their smaller-sized counterparts.

The outlook for Pacific MRs holds many moving parts, making it rather challenging to determine the direction of freight rates.

Starting with supply, the positive news for owners is that a tanker repositioning from West to East will likely not take place in the next few months. This is because gasoline flows towards the US and overall flows to LatAm are expected to remain robust. Although according to the EIA, US gasoline consumption will not surpass pre-pandemic levels, the low levels of inventories across the country deem steady external supplies necessary.

However, fleet developments are not looking encouraging for vessel operators. Looking at vessel deliveries, the Q2 2022 tally is expected to be the highest for more than 2 years, with 14 units still expected to hit the waters. On the other hand, demolitions remain at low levels as only 9 MRs have been scrapped so far for the year, lower than the 15 witnessed for the same period in 2021. The current average demolition age for MRs is around 22 years which translates to around 5% of the fleet. However, MR earnings are once more in the black, after a prolonged depressed period which makes the scrapping case an unlikely scenario.

On the demand side, the level of Chinese exports will play an important role in shaping MR rates. CPP flows out of the country picked up in April but the elevating trend came to a halt according to May’s preliminary data. Yet, the country will likely hand out a complimentary batch of export quotas, potentially providing support to the MR segment. This move indicates that amidst weak domestic demand, immediate exports are in need. These exports out of China will be likely directed towards Asia, with some movements as well to LatAm, mainly carried on MRs. However, this support might not prove sufficient in the long run, as the quotas amount to 130mb, 55% lower when compared with the first two rounds of quotes introduced last year. Furthermore, exports could also cool down as the nation is gradually recovering from Covid restrictions and consumption picks up.

At the same time, sanctions on Russian oil products would make the case for a ramp up in Pacific refinery run rates stronger. However, there are no evident signals pointing to such a direction. And while the persistent demand out of Australia and New Zealand remains the silver lining for CPP tankers, fire incidents at refineries in Southeast Asia and the Far East, might act as a further dampener for MRs. The Oceanian nations might be forced to look at further sources for replacements such as India. This will likely mean more business for LR operators instead of MRs eventually.

Based on the above, the tanker demand side mimics the supply dynamics with signals being mixed. One additional aspect in question is whether the strength of Asian product cracks stems from strong regional demand or is rather the result of a (temporary) knock-on effect of the developments in the West as well as limited supplies. What is for certain though, is that the former must be true for a rebound in Pacific MR rates to materialise. It is necessary for refining margins in the East to remain high, and not follow their Western cooldown, in order to incentivize regional product flows, thus boosting MR demand.