For the second time in nearly three years, the global oil markets are navigating yet another once-in-a lifetime event triggered by the global response to the invasion of Ukraine by Russia – a top global exporter of crude oil and refined fuels – which has roiled world markets as trade flows are reshuffled and oil refiners adjust production. In this week’s insight, we take a look at the global fuel oil markets from an Asian perspective and examine how Russia is rerouting its mammoth residual fuel exports.

Soon after the war began in February, Russia, the world’s top exporter of residual fuels, was forced to redirect its exports of the fuel away from traditional markets in the US and Europe in the face of sanctions and voluntary boycotts. As Russian fuel oil headed further east, a majority of which high sulphur, depressed Asian HSFO prices as supplies ballooned even throughout the peak summer demand season when power plants in the Middle East and South Asia ramp up consumption to meet cooling demand.

While the Middle East, in particular Saudi Arabia and the UAE, continue to import higher volumes of Russian fuel oil, demand momentum has slowed to 90kbd in October so far as peak summer consumption fades. This compared to record Mideast imports from Russia of 210kbd in both July and August.

By contrast, Asia continues to play an increasingly important role as a major alternative outlet for Russian fuel oil exports. Imports from Russia into the region continue to set records with preliminary figures for October at a fresh high of 560kbd, up nearly 50% from the previous month.

The Singapore bunkering and trading hub unsurprisingly accounted for the lion’s share of Russian fuel oil imports into Asia with 230kbd so far in October, preliminary data showed, pushing weekly HSFO floating storage inventories around Singapore to climb to over 1.4mt in late-September. Just 30% of the Russian volumes included in the Singapore import figures were offloaded into landed storage tanks while the rest were delivered onto floating storage tankers anchored in neighboring Tanjung Pelepas. 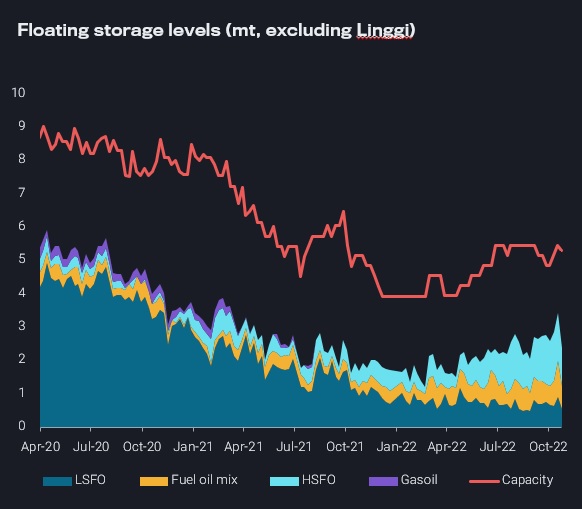 China and India were Asia’s other top importers of Russian residual fuel oil with 150kbd and 130kbd, respectively.

The Russian fuel oil flows into mainland China have also meant that imports from Singapore, a traditional supplier to the country, have significantly slowed to 30kbd in October, on par with September’s six-year low.

Regional HSFO prices are likely to remain depressed over the near term as Russian flows continue to gain momentum. This is compounded by few signs of increased regional fuel oil consumption from utilities as a result of soaring gas prices in recent months.

Asia’s LSFO market, comparatively, is tighter than HSFO due to a persistent shortage in global gasoil stocks (another result of Russia’s war), and limited arbitrage flows from the West. While the east-west LSFO arbitrage spread has widened in recent weeks, limited European availability due to refinery maintenance and outages as well as elevated freight rates are keeping a lid on western arbitrage flows into Asia. 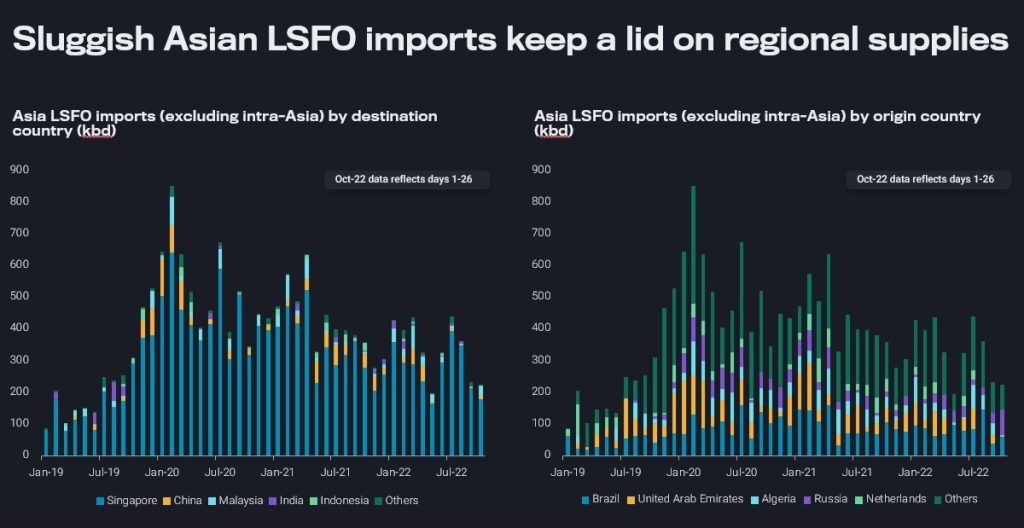 The effect of the lower arbitrage supplies, however, is dampened by firm intra-regional LSFO flows. Weak gasoline margins in Asia are forcing some regional refiners to scale back on secondary unit runs, in turn lifting regional exports of LSFO blendstocks. Preliminary data shows Singapore LSFO imports from Asia for October (days 1-26) stand at 250kbd, the highest in nearly two years. Higher LSFO output from China due to increased export quotas and the long anticipated ramp-up of Kuwait’s Al-Zour refinery, could also ease supply constraints.

Growing HSFO supplies amid tight LSFO volumes in the region has led to a widening of the price differentials between the two fuel oil grades to over $300/t in recent weeks, according to Argus data. But this trajectory could change drastically if Russian fuel oil exports are undermined by EU sanctions next year.