As the global diesel shortage rises, the world looks to Asia’s spare refining capacity for additional supplies. In this insight, we assess how much relief Asia can realistically offer in the near-term.

Rising diesel shortage in the western hemisphere, that is at risk of being further exacerbated by Russia sanctions, has sent traders scrambling for additional supplies from Asia and the Middle East in recent weeks. But the reality is that supplies in the East of Suez are also struggling to keep pace with demand – both domestic and exports, which have driven diesel cracks surging to multi-year highs. Unlike the west, which has seen its refining capacity shrinking due to permanent closures in the past two years, Asia has spare refining capacity and new additions that could add some much-needed supplies to the market. How much relief can it realistically offer?

Timing is a crucial factor

Within Asia, China has the largest spare refining capacity, but weak domestic margins and planned maintenance are expected to keep a large proportion of the spare capacity offline this quarter. The country’s two new refineries – PetroChina’s Jieyang and Shenghong’s integrated refining-petrochemical site – which had earlier planned to commence operations this quarter, are likely delaying their start-up due to weak domestic margins, dashing hopes of higher diesel exports from China in the near-term. But refiners may consider raising refinery runs and increasing exports after their planned maintenance if export margins remain strong, given that they still have a fair amount of unused export quotas.

Higher crude arrivals in South Korea and Taiwan in the first two weeks of May, up nearly 10% month-on-month (m-o-m) combined, are hinting at refiners raising or planning to raise runs this month. In fact, total diesel exports from both countries are up by 15% m-o-m in the first 14 days of this month, with incremental supplies heading directly to Australia, the Philippines and Vietnam.

India’s refiners, which export more than half of its diesel to the west, have been keeping their refinery runs near capacity, taking advantage of the strong domestic and export margins. Our preliminary data shows the country’s diesel exports rebounding in the first two weeks of this month, with more cargoes bound for Africa and Brazil, compared to Europe. Export volumes, though, remain below the multi-year highs seen in March, the latter likely boosted by stock draws. Besides refinery yield adjustments, there is little to no spare refining capacity that can be tapped upon to boost India’s diesel exports. 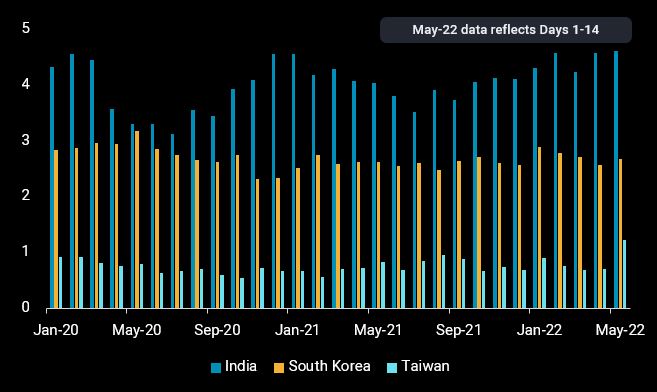 The availability of spare refining capacity is only one part of the equation. Rising clean tanker rates are stacking onto soaring free-on-board (FOB) cargo prices, significantly inflating delivered costs for importers. For instance, MR rates on popular diesel trade routes, TC7 (Singapore-to-East Coast Australia) and TC18 (US Gulf-to-Brazil) have doubled compared to the start of the year on a $/t basis (Baltic Exchange). Hefty import prices have exacerbated diesel shortages in developing countries in Africa while Sri Lanka, with its weakening currency, is enduring widespread fuel shortages and power outages. 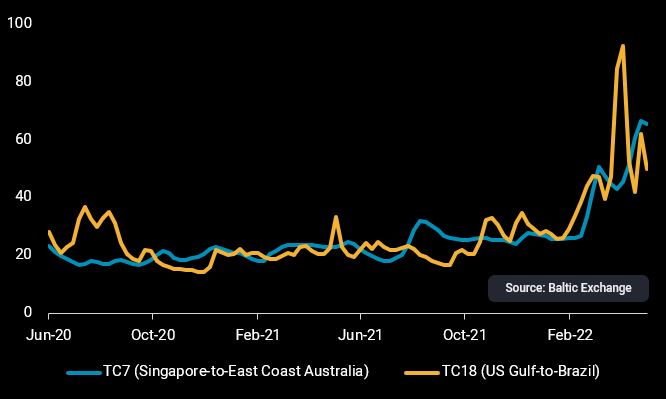 As economies re-open, the pent-up post-pandemic demand and the upcoming summer driving season in the US is fuelling a rise in gasoline and jet fuel demand. With refiners currently maximising diesel production at the expense of other clean products, gasoline and jet fuel tightness has also been rising recently and are projected to accelerate in the weeks ahead. In fact, US and European gasoline cracks have recently surpassed diesel’s, which will now incentivise refiners with flexibility for yield shift to favour gasoline production, further exacerbating the global diesel tightness.