A flood of diluted bitumen cargoes has rapidly filled up storage tanks in Shandong, as traders and refiners scrambled to offload the cargoes before the consumption tax on diluted bitumen imports kicked in on 12 June. With this new tax in place, independent refiners are expected to cut back on diluted bitumen and raise Malaysian crude blends and fuel oil imports to meet their feedstocks requirements.

A flood of diluted bitumen (DB) cargoes has rapidly filled up storage tanks in Shandong, as traders and refiners scrambled to offload the cargoes before the consumption tax on diluted bitumen imports kicked in on 12 June.

With this new tax in place, independent refiners are expected to cut back on DB and raise Malaysian crude blends and fuel oil imports to meet their feedstocks requirements.

Nearly 2.8 million mt or 600,000 b/d of DB, predominantly made up of Venezuela’s Merey crude, was discharged into China in May, the highest monthly volume seen for multiple years, according to Vortexa’s cargo analytics data.

The consumption tax of $30/bl (or 1.2 yuan/litre) that is now levied on imported DB cargoes into China, has eroded the price advantage that these barrels previously had compared to other crude grades. With this feedstock losing its appeal, independent refiners are now turning to other heavy crudes or fuel oil.

Evading sanctions and tax through transshipping and relabelling

Venezuela’s flagship Merey grade has been a favoured feedstock by China’s independent refiners for asphalt production. After the US sanctions in 2019, state-owned China National Petroleum Corporation (CNPC) stopped lifting Venezuelan cargoes, which saw a re-routing of the cargoes to Malaysia for relabelling into other grades such as Singma Blend before being offered to China.

Activities of relabelling Merey crude as diluted bitumen started picking up in May last year as independent refiners rushed to purchase discounted feedstock and ran out of crude import quotas. The relabelled barrels also found favour among smaller refiners that faced crude import quota restrictions, and encouraged some Iranian heavy crude cargoes to be relabelled as Malaysian diluted bitumen in recent months.

In the weeks leading up to 12 June, more floating storage tankers were seen rushing into China to discharge their DB cargoes, boosting total arrivals of DB into China to nearly 600,000 b/d in May, compared to 365,000 b/d averaged across March and April. More than 43% of these cargos were received by refiners and traders via ports in Shandong while about 40% were diverted north to Liaoning province, another regular but less congested receiving area for these barrels.

With the new consumption tax kicking in, independent refiners are expected to slash DB imports and turn back to Malaysian blends , and potentially pick up more heavy-sour grades from the Americas and Middle East. Limited by crude import quotas as the second batch is yet to be granted, some refiners are also starting to import straight-run fuel oil to supplement their feedstock requirements.

Combined imports of heavy-sour crude to China totalled 1.1mn b/d in May, rising by 16% month-on-month. Volumes could rise further with increased demand from independent refiners in the coming months. More straight-run fuel oil imports from Russia and Singapore could also be expected. 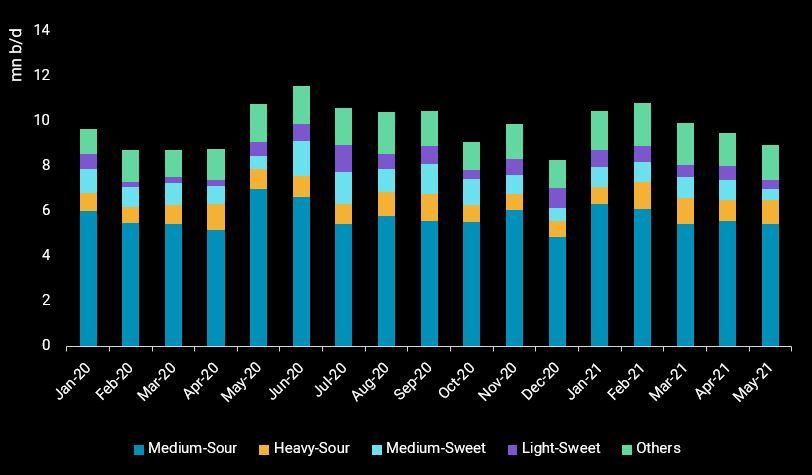 Overall, China’s seaborne crude imports are expected to see a soft rebound in June versus May, after declining for four straight months, as refineries restart from seasonal refinery maintenance and imports of sanctioned crude barrels remain robust in the first half of the month. But high crude inventories topped with abundant DB supplies, coupled with elevated crude prices are likely to curb both state-owned and independent refiners’ appetite for crude barrels.

Whether a stronger recovery can be seen in Q3 will depend on the allocations of crude import and product export quotas due to be granted in end June. Any significant cut backs on the quotas could limit room for higher crude imports, even with the start-up of Shenghong’s 320,000 b/d green field refinery in Jiangsu, which is expected to start trial runs in late August.