China’s new consumption tax on imports of mixed aromatics and light cycle oil (LCO) is about to turn the tides of its domestic supply and exports of gasoline and diesel/gasoil. Downside risks on MR tanker demand looms ahead.

China’s new consumption tax on imports of mixed aromatics and light cycle oil (LCO) is about to turn the tides of its domestic supply and exports of gasoline and diesel/gasoil. Downside risks on MR tanker demand loom ahead.

Chinese independent refiners and blenders have been exploiting a loophole that exempts these intermediate products from consumption taxes to import and blend them into gasoline and diesel/gasoil respectively, leading to massive oversupply and soaring product exports this year. Effective 12 June, a 0.24 USD/litre (or 1.52 yuan/litre) consumption tax levied on mixed aromatics and LCO imports is expected to significantly reduce import volumes of these blend components, tightening domestic gasoline and diesel/gasoil supplies.

South Korea, the largest LCO exporter, registered a steady rise in its export volumes to China across 2020. GS Caltex emerged as the largest supplier, accounting for over 40% of the country’s 200,000 b/d of LCO exports last year. China’s Southeast coastal areas top the list of destinations, with Zhoushan and ports to its south receiving over 90% of the country’s LCO imports from South Korea last year.

To mitigate a growing domestic diesel/gasoil surplus, South Korean refiners have turned to exporting LCO which found favour with Chinese diesel/gasoil blenders amid firming domestic margins sweetened by the possibility of tax evasion. This growth momentum from last year continued into the first three months of this year, peaking at 280,000 b/d in March, before easing to 230,000 b/d in May, in part dampened by the massive gasoline and diesel/gasoil oversupply in China. 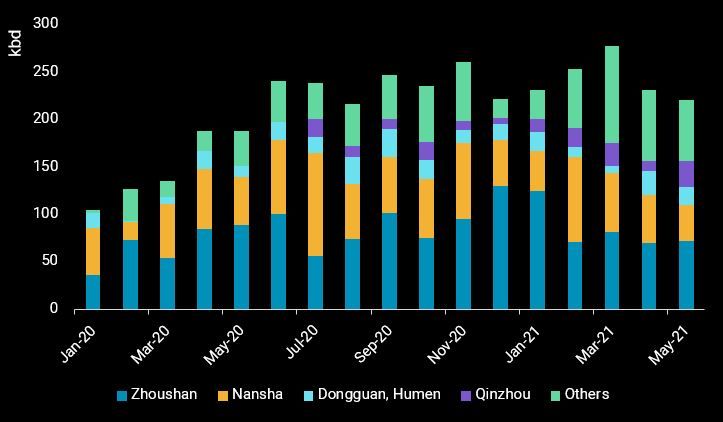 Amidst peak refinery maintenance, China’s gasoline exports are projected to inch upwards to 470,000 b/d in May, the highest monthly average volume seen so far this year. Although exports of diesel/gasoil, estimated at 475,000 b/d this month, are down 25% from April’s peak, it is still higher than the five-year average volumes. New refinery capacity additions, robust mixed aromatics and LCO imports, coupled with slowing domestic demand growth, have led to a ballooning of the country’s gasoline and diesel/gasoil surplus. This surplus is lifting exports to unsustainable levels against the backdrop of dismal regional product cracks. 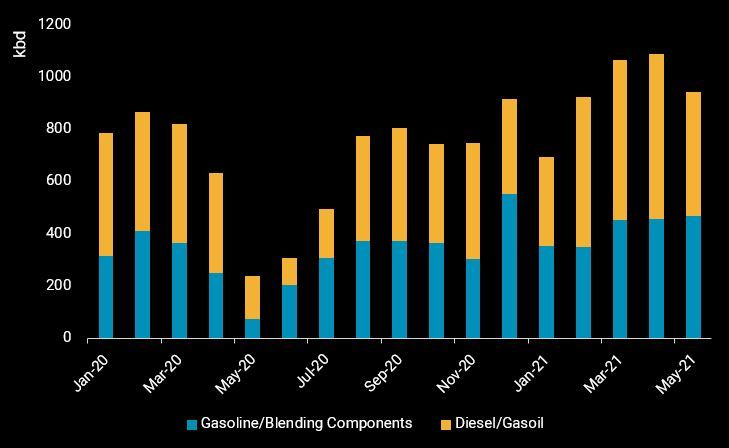 Closely following the announcement of the new consumption tax on 14 May, domestic wholesale prices for gasoline and diesel soared by 25 – 35% among refiners, in anticipation of tightening supplies as imports of mixed aromatics and LCO dissipate. Higher domestic prices and continued weakness in regional cracks will encourage more gasoline and diesel/gasoil barrels to stay within China, reigning in the country’s exports.

The future of mixed aromatics and LCO supplies are uncertain – with the possibility of being re-routed to other destinations such as Singapore, Malaysia and Indonesia for blending or being upgraded into finished gasoline and diesel/gasoil in refineries, where possible.