Fuel oil exports from Russia and other Former Soviet Union nations (FSU) are on track for a weak October, as ongoing refinery maintenance work continues to weigh on production and limits flows to key importers Netherlands, the US and Asia.

Fuel oil exports from Russia and other Former Soviet Union nations (FSU) are on track for a weak October, as ongoing refinery maintenance work continues to weigh on production and limits flows to key importers Netherlands, the US and Asia.

Total FSU exports to all destinations are expected to reach 4mt in October, down from 4.5-4.6mt in the same month in the previous two years and flat from similarly low levels in September (see chart). 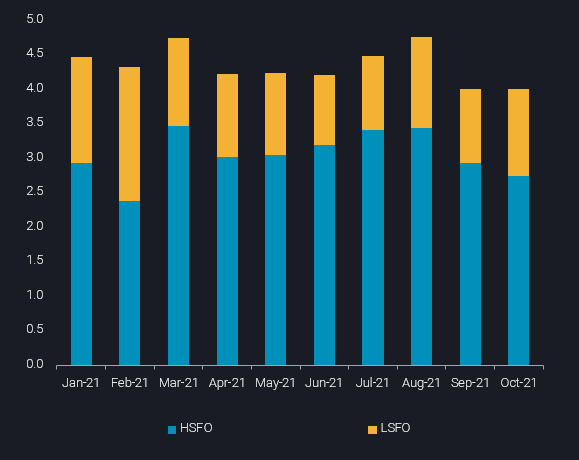 Autumn refinery maintenance is restricting fuel oil production in the country and stifling exports in the seaborne market. Vortexa calculations based upon maintenance schedule data from Argus Media shows a clear peak over the last two months, supporting the persistently low fuel oil exports from the wider FSU region this month. 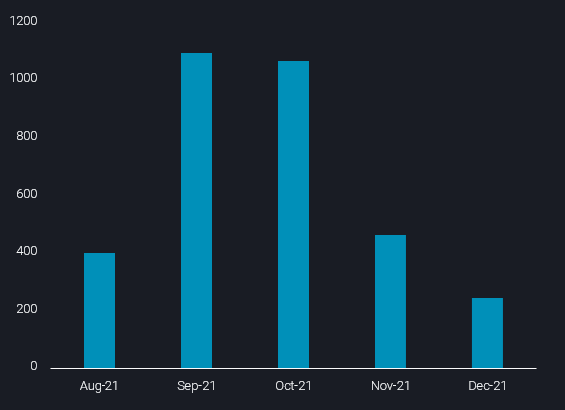 Looking ahead, the expected reduction in maintenance during November will pave the way for higher fuel oil exports towards the end of the year. Given current market dynamics, long-haul fuel oil flows are likely to be outstripped by increased flows to Rotterdam.

FSU fuel oil flows to Rotterdam have tailed off in recent months, in line with reduced total exports from key Russian Baltic ports including Ust-Luga and Vysotsk. Around 940kt departed from FSU ports for the Netherlands in October, down from 960kt in September and from a multi-year high of 1.3mt in July. But with FSU fuel oil production anticipated to rise in November, Netherlands could see a trend reversal and emerge as the biggest receiver of marginal exports.

The flow of Russian fuel oil into Rotterdam (or the wider ARA region) is likely to be driven by ‘push’ factors rather than ‘pull’ factors as HSFO margins in northwest Europe remain weak. Supplies remain ample in the ARA region, as re-export/arbitrage opportunities to East of Suez have closed. But given Netherlands’ close proximity to the Russian Baltic ports, and therefore lower freight costs, it is more likely than other long-haul importers to receive any extra volumes that materialise, post maintenance. Its potential as blending hub for different fuel oil qualities, including some suitable for power generation, may underpin this development.

In line with closed arbitrage economics, Vortexa’s latest data shows that no FSU fuel oil cargoes have departed for Asia in the past two weeks. The most recent departure was a HSFO cargo loading from Ust Luga on October 12, currently bound for Sikka, India. Demand for Russian Baltic and Black Sea cargoes is unlikely to pick up quickly in Asia, where HSFO valuations are under particular pressure (Argus Media).

For transatlantic flows the outlook is somewhat mixed as there are valid reasons for an uptick in Russian fuel oil exports to the US – mainly PADD 3 – but rising freight rates are likely to cap the viability of arbitrage flows along the route. As for the latter, Aframax rates from Europe to the US are up by 25% month on month. But strong inflows of US crude into Europe could open up opportunities for dirty tankers travelling back to the US Gulf Coast.

Refinery utilisation in PADD 3 stood at 84.2% in the latest EIA data, down by 4.3pp from the start of October. This suggests that there is room for refiners to raise run rates, especially in an environment of stronger refining margins. Secondary feedstocks, especially in the higher sulphur-range, could become particularly attractive in the US, as it has superior hydrogen economics amid much lower domestic natural gas prices, when compared to LNG-import-related pricing in Europe and Asia.