Global oil demand is showing signs of cooling after several months of rally. We explore the leading market indicators and what this means for refiners.

Global fuel prices are tumbling in recent weeks as the supply tightness that plagued the market and sent prices skyrocketing to fresh highs barely two months ago, has started unwinding. Slowing arbitrage flows to key import destinations and rising inventories in major storage hubs are signalling that demand has peaked and supplies are finally catching up, although South America makes an exception. As refining margins continue to slide and petrochemical margins remain lacklustre, trimming refining runs and switching yields could be on the cards for refiners in the coming months.

As a first sign of demand cooling, gasoline imports into USAC are on-track to fall by 15% month-on-month in July after reaching a 13-month high in June. Imports into the region are down nearly 10% year-on-year between May and July, and well below pre-Covid levels, as record-high pump prices dampen consumer sentiments. Inventories, meanwhile, have climbed by nearly 1.2mb in the first two weeks of this month, according to the EIA data, off the back of relatively stable refinery and blending supplies.

With the US summer driving season winding down, upsides to the country’s gasoline demand are limited, at least in the near-term. Instead, US Gulf Coast refiners have raised gasoline and diesel exports to fuel-thirsty South America and the Caribbean, with volumes projected to reach a multi-year high of 1.1mbd in July, as domestic refiners in the latter countries struggle to meet their own demand. While this has lent some support to product cracks in the US, it is still not sufficient to counter the downward forces of growing surplus in the wider global market. 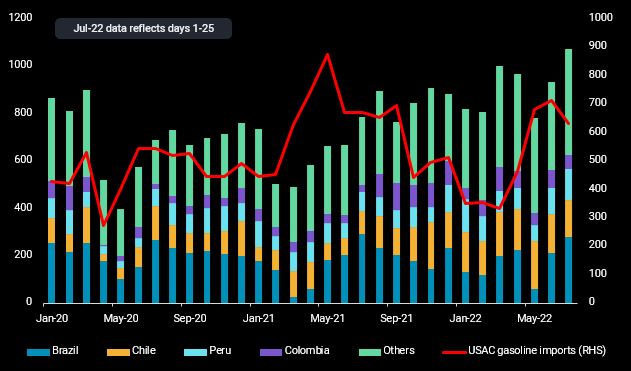 Similar to the USAC, gasoline imports into Southeast Asia (excluding Singapore and Malaysia) fell by nearly 15% month-on-month in the first three weeks of July, led by declines in Indonesia. Rising gasoline exports from China, Taiwan and India to Singapore, against a backdrop of cooling regional demand, has seen light distillate inventories in Singapore rising by almost 1mb so far this month (Enterprise Singapore). It comes as no surprise that the rapidly increasing gasoline length has sent regional cracks free-falling in the past weeks.

While Asia’s diesel cracks have also cooled significantly since their peak in June, a comparatively more inelastic and resilient regional demand has cushioned its fall. Diesel imports into Southeast Asia have averaged 410kbd so far this month, flat versus volumes in the past four months. In the wider region, India’s diesel demand is expected to cool this quarter as the onset of the monsoon season hampers construction activities, although this is likely to be partially offset by a seasonal increase in Chinese domestic diesel demand. 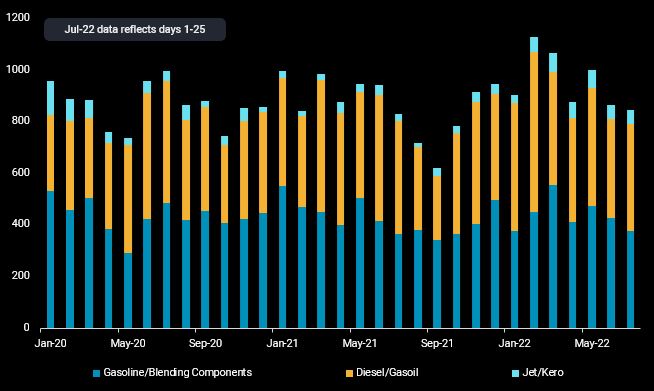 As Asia’s petrochemical margins remain in the doldrums and regional gasoline demand sees a downturn, the outlook for naphtha has turned more bearish. Several cracker operators in the region have cut runs this month, while others have brought forward their planned maintenance to reduce losses. Despite this, naphtha arrivals into Asia have remained flat versus previous months at 1.6mbd, defying fundamentals. A logical explanation is that in the absence of an alternative disposition, incremental naphtha supplies from the Middle East are making their way to the East, primarily to South Korea, for stockpiling while waiting for cracking or reforming margins to recover. 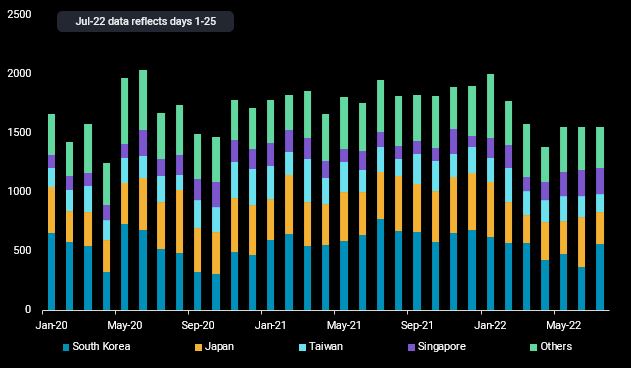 What’s next for refiners?

As windfall margins diminish, refiners particularly in Asia may consider cutting runs or shutting down for maintenance work this quarter. Further yield shifts to reduce gasoline and increase diesel or LSFO production through secondary units could also be on their cards. While this quarter could be a tough seasonal lull for refiners, oil demand could see a rebound in the Western hemisphere and North Asia for winter heating in Q4, supporting margins. Further upside is likely to come from fuel switching amid tight LNG supplies, as Russia has steadily cut piped natural gas supplies to Europe to a mere 20% of normal volumes.