The global middle distillate market looks finely poised for this quarter as we enter a period of seasonally higher diesel consumption in the Atlantic Basin and rising east to west shipments.

The global middle distillates market looks finely poised for this quarter as we enter a period of seasonally higher diesel consumption in the Atlantic Basin and rising east to west shipments.

Diesel margins in Europe, the US Gulf Coast and Asia have strengthened in recent weeks despite crude oil prices hitting multi-year highs. We believe there is potential for this trend to continue through the winter and outline the key flows to keep track of.

Combined jet fuel and diesel flows from East to West of Suez (e-w) were at the low end of historical range in Q1 2021, but since then the volume of middle distillates plying this key trade route has grown from strength to strength underlining the growing supply-demand imbalances in the two regions.

Preliminary October data shows 1.35mbd of diesel and jet is expected to arrive into Europe or the Americas from the Middle East and Asia. This matches the 10-month high seen in August (see chart). Overall e-w flows have sustained high levels for the past three months, resembling pre-covid norms. For now, there is little reason to think any trend reversal will take place. 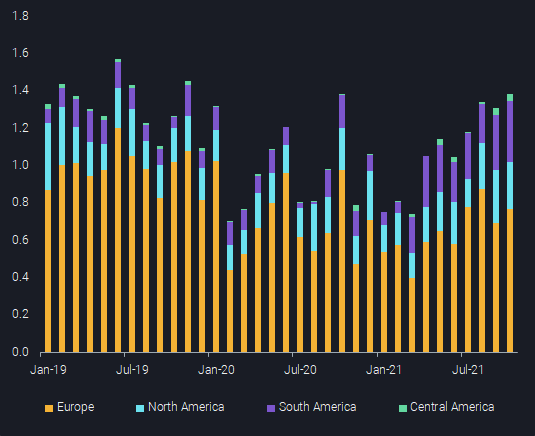 Amongst all the East of Suez middle distillate exports, India and UAE have seen the largest growth in recent months, taking market share along the e-w flow from the top diesel supplier Saudi Arabia. 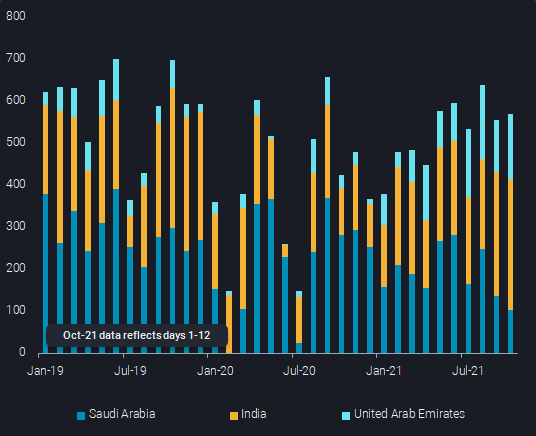 UAE diesel exports to West of Suez stood at 120kbd in September, having fallen by about 40kbd from the July-August level, a record high. Rising UAE diesel exports are closely tied to clean VLCC activity with Ruwais-origin cargoes often picked for long-haul, maiden-voyage supertankers.

Interestingly both Indian and UAE origin jet fuel flows have slowed down since August – the latter historically a bigger exporter of jet fuel rather than diesel along the e-w route.

In contrast to the other key Middle Eastern jet fuel producers, Kuwait has steadily raised its westbound jet fuel exports, even topping pre-covid levels. Exports hit 90kbd in September which matched the previous high seen in May 2020. Climbing jet fuel exports are likely linked to KNPC’s announcement last month that its clean fuels project had reached full operations after 6 years. 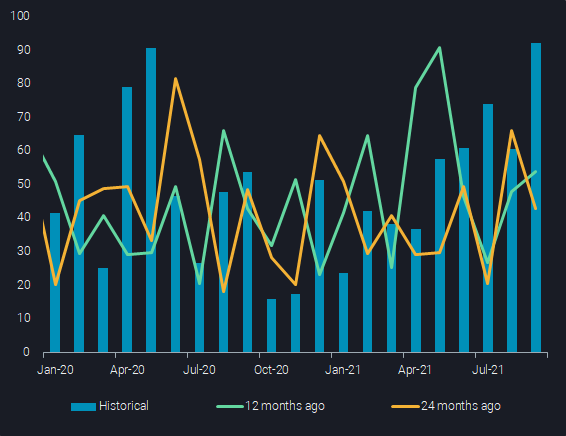 Besides Kuwait, China was the only other major East of Suez producer to increase westbound flows in September. China does not regularly export large volumes of jet fuel along the e-w route as most Chinese seaborne departures end up in Hong Kong, other Chinese ports or stay within the region, but just over 100kbd left China in September for Europe and the Americas.

Neither China nor the wider East Asian region is likely to maintain the high jet fuel export levels observed over August and September, as China’s product export limitations, and more importantly, the Far East’s kerosene demand and stockbuilding (residential heating) will restrict arbitrage flows especially to the US West Coast.

All eyes on Atlantic Basin

Under the backdrop of rising diesel East of Suez exports, the next question is where in the West of Suez are the cargoes most likely to arrive? Europe is typically seen as the natural sink for the world’s excess diesel and jet fuel but the situation on the other side of the Atlantic Ocean could alter trade dynamics this winter.

Following a string of refinery outages in PADD 3 in recent months, and firmer demand from Latin America, US distillate inventories are heading into the winter below pre-covid levels. Brazil and Chile have relied heavily upon PADD 3 exports in recent months, seeking to mitigate the impact of dry weather on power generation and irrigation.

This has naturally limited pipeline flows of PADD 3 diesel to PADD 1 and now means PADD 1 distillate stocks are going into the winter at the bottom of the 5 year seasonal range. Our latest flows data shows only a small rise in reverse-arb transatlantic diesel arrivals this month (see chart) but there is the potential for much sharper increases in November-December. 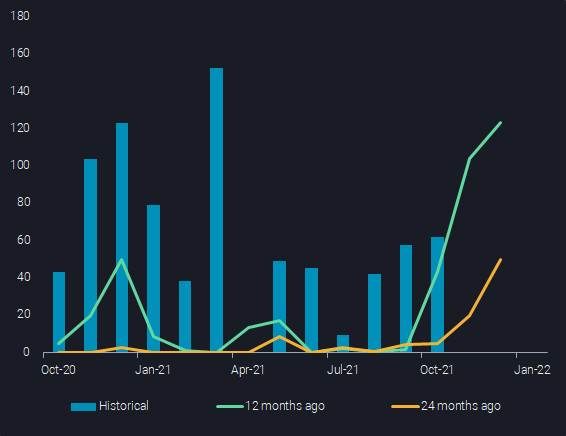 As we head towards the end of the year, Russian diesel flows could be the most important supplies to watch at the margin in the Atlantic Basin market. With the bulk of seasonal refinery maintenance work expected to draw to a close by November, Russian diesel exports are primed to rise. This would typically mean more flow to northwest Europe, but could also mean some direct shipments from the Baltic to PADD 1. According to market participants, previous concerns on meeting PADD 1 specification for heating oil have eased, so a jump in Russia to PADD 1 exports could materialise.

Looking ahead, it will be interesting to see is the repercussions of natural gas prices being up to three times as high as oil prices on refining operations, yields and economics. We see some support for rising crack spreads for ULSD and jet fuel, as hydrocrackers in Europe often use natural gas for the production of hydrogen, which is essential for desulphurisation. As hydrocrackers also allow to hike the yields of jet fuel, middle distillates will be affected across the board. While utilisation of hydrocrackers may suffer from high natural gas prices temporarily, ultimately the rising production costs will be passed on. The industry simply cannot afford to lose more production capacity, especially in the heating season and with jet fuel demand coming gradually back.