Growing sanctions on Russia raise the question of re-supply to Europe. We take a look at the Middle East, which based on its size would be promissing, but flow trends suggest otherwise.

The oil and gas markets are watching the steady escalation of the Russia-Ukraine war. The situation now easily has the potential to become the biggest challenge in the two markets’ history. This raises the question about alternative supply sources from a European perspective, but ultimately also from a global one, as Russian production shut-ins are very likely already happening across the hydrocarbon slate.

Based on its size, current refining investments and supposed spare capacity, the Middle East is of course one of the places to consider. But a look at historical trends raises question marks. 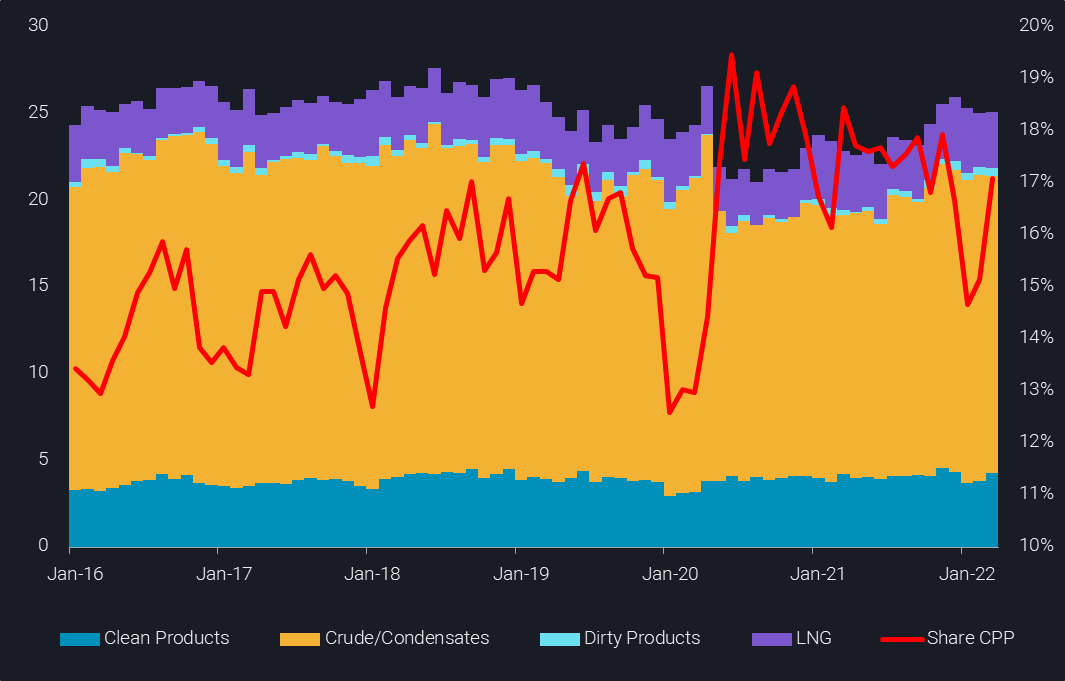 From a long-term perspective, Middle Eastern hydrocarbon net-liftings appear to have passed a peak in 2018. While CPP, DPP and LNG are largely aligned with 2018 average levels over recent months, crude net-liftings are still missing 1.5mbd over Q1 2022 relative to the 2018 baseline. And recently the 2021 trend of a crude export recovery has stalled. For Saudi Arabia and the UAE, there is even a stagnation in crude exports since Oct last year, making it a full six months, and raising strong questions about spare capacity, or at the very least, the willingness to use it. 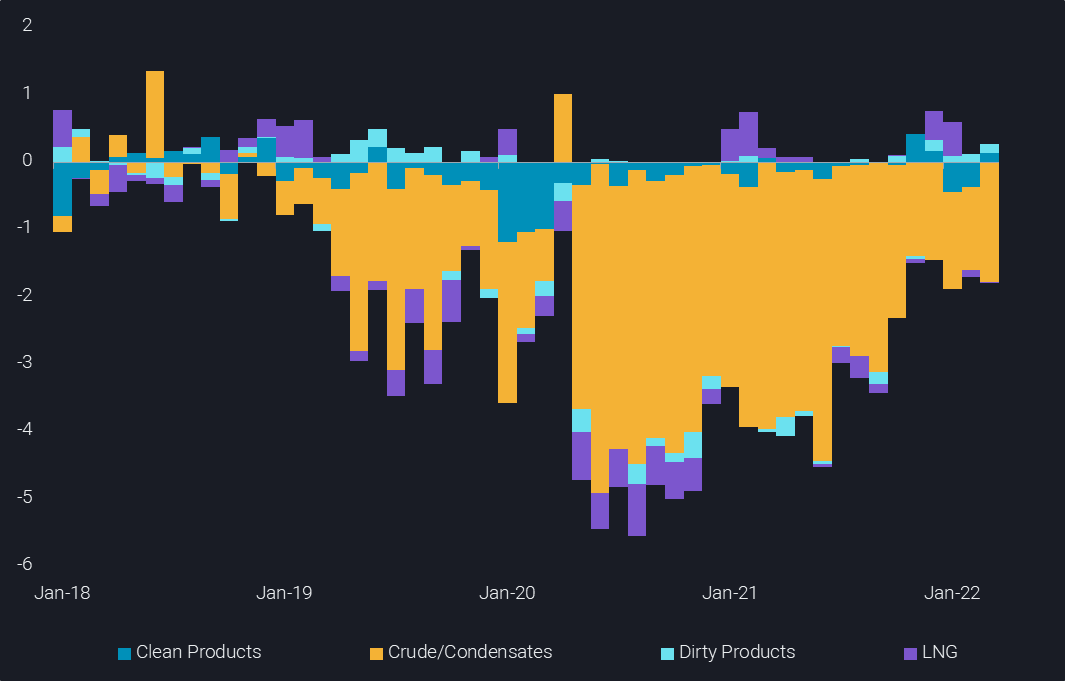 For European players alternative sources for crude oil are plentiful, and any price effects will spread out globally, but the situation is more desperate when it comes to alternatives for piped Russian gas and (to a lower extent) diesel. For some central European countries it is not even logistically possible to import alternative gas. At any rate, European politicians have been visiting Qatar and other countries in the Middle East to tap up additional LNG supplies. It appears unlikely that much more gas will be produced, which means more rerouting from the key Asian market, and the known drastic repercussions on pricing. Compared to oil, gas is generally a much smaller market, more volatile, and with a lower demand elasticity to price. 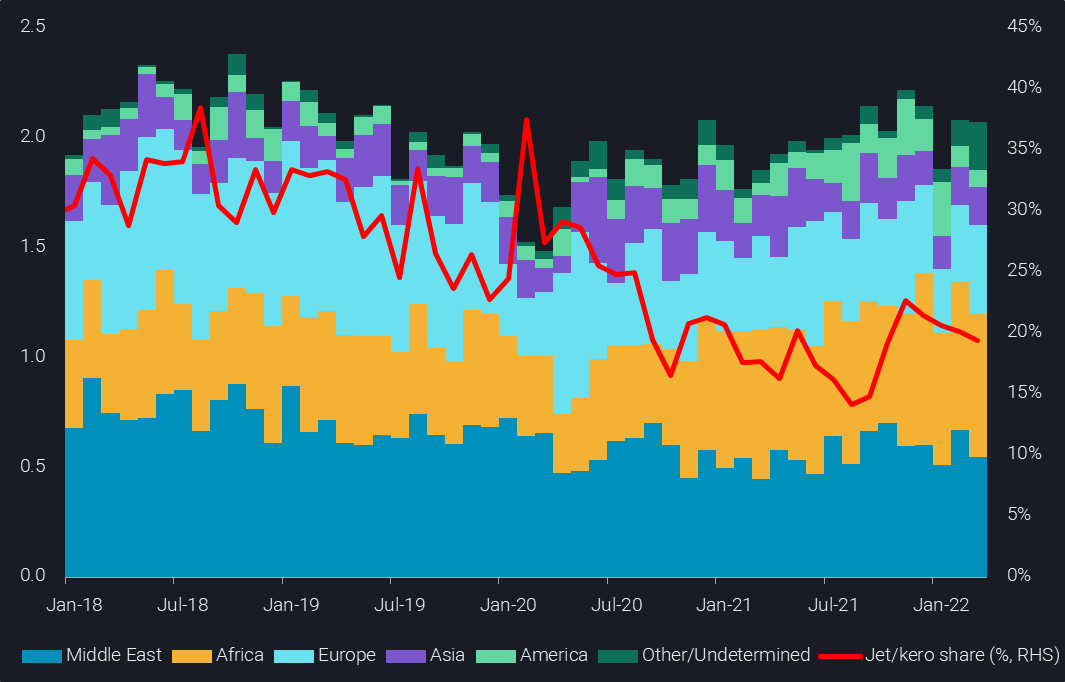 For European buyers, it is far from straightforward to forgo Russian diesel. While we observed some rerouting and temporary floating of Russian diesel cargoes loaded in March, pretty much all of this was ultimately discharged at European ports. The Middle East is of course a big supplier of middle distillates, but also in this case total loadings from the region have still been lower over recent months than the 2018 average. Producers had been cutting back on jet/kero, supporting higher diesel loadings in H2 2021 (versus than the 2018 average) but this trend also reversed last month, with the stakes of jet/kero rising again (see blog).

It should not be overlooked that the Middle East needs to retain some middle distillates within the region – over the last six months more than 60% of liftings stayed in the region or moved to Africa, mostly nearby markets at the eastern coast. Over the same timeframe, just 390kbd of middle distillates have been lifted from the Middle East to Europe, down from 630kdb on average in 2019. Of course those European players that own stakes in Middle Eastern refineries may try to secure extra supplies in the coming months, and there could be also some upside from higher refinery operations in Jizan and the start-up of Al-Zour, but overall the Middle East appears unlikely to supply a big junk of the anticipated shortfall in European diesel in the coming months. This view is supported by rising diesel cracks amid the official and self-imposed sanctions taking place on Russian cargoes. 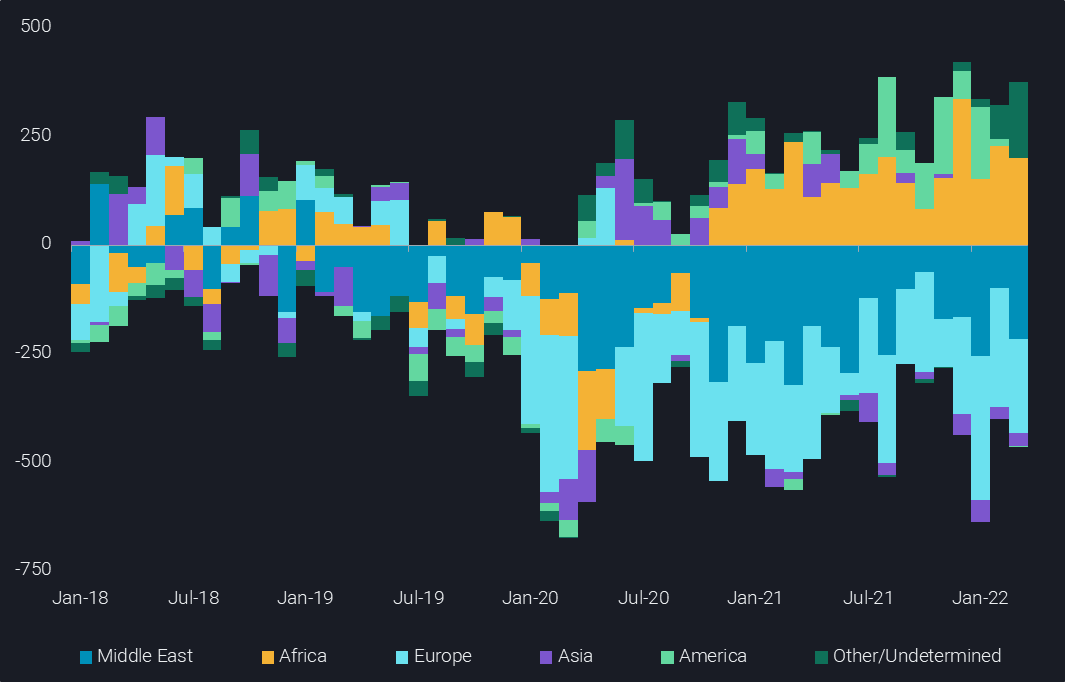 Ultimately the top supplier for additional energy is likely to be the United States. For crude and LNG this is already visible, and increasingly also for diesel. The United States (and to some extent Canada) may not have huge spare upstream capacity, but at least they have potential for relatively quick growth. And US players are generally highly reactive to price signals, while the relatively short distance to Europe helps as well.